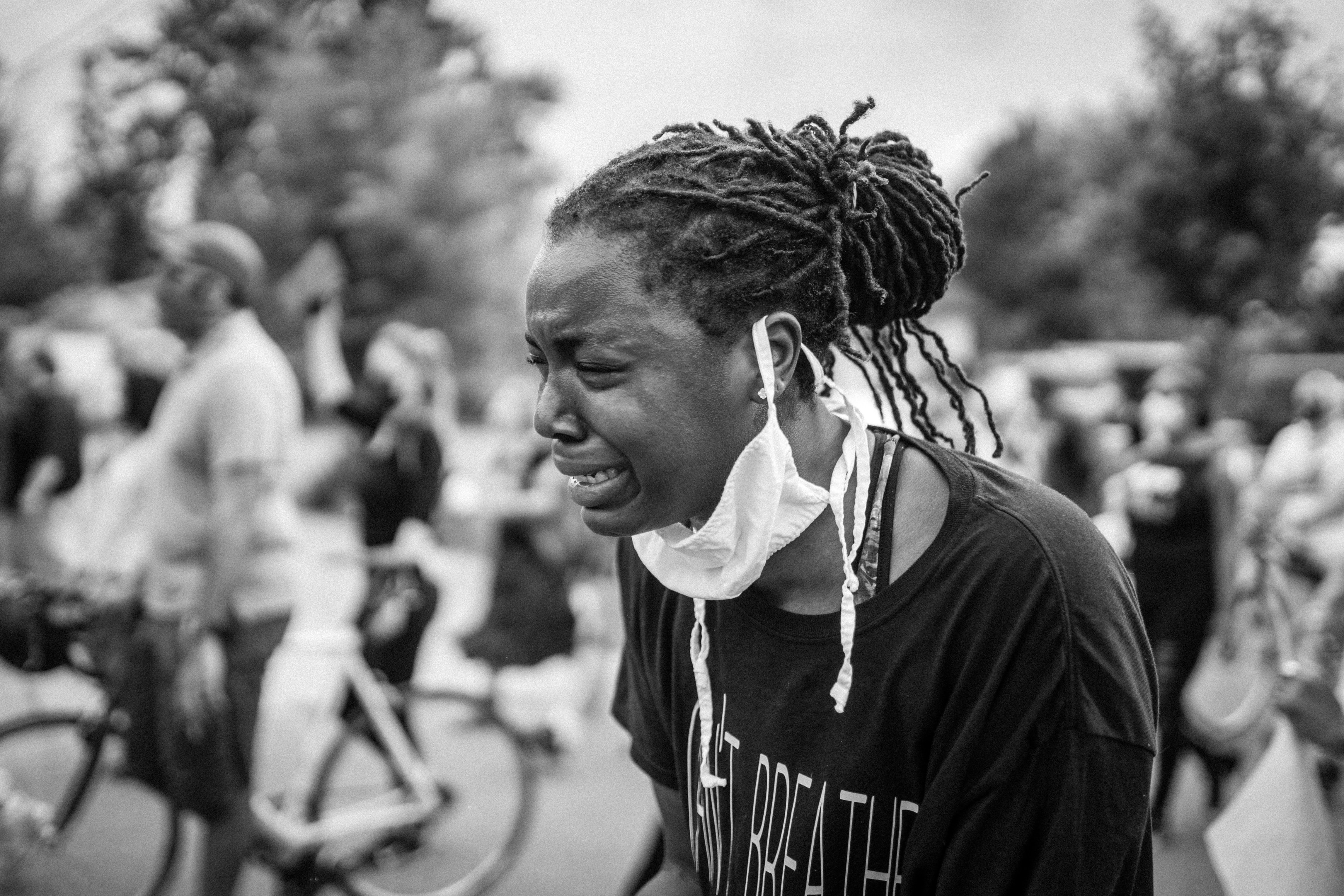 Photo by Parker Johnson on Unsplash

Just over two weeks after the murder of George Floyd, American artist Titus Kaphar created the painting of the Black mother illustrated on the June 2020 Time magazine cover out of a state of pain and hopelessness. Accompanying the painting is a poem in which he explores the emotional exhaustion, hurt, and troubled thoughts he feels for his children and the Black mother in the painting, which “references George Floyd calling out for his mother during his arrest” (Man). In his Time magazine cover painting “Analogous Colors” and accompanying poem “I Cannot Sell You This Painting,” Kaphar portrays the painful cycle of racism in America through allusions, rhetorical questions, metaphor, and the sorrowful image of a Black mother and her absent child, also shedding light on the dual role that the Black mother plays as a caretaker and mourner in her relationship with the cycle of violence.

By connecting his enumeration of the Black lives taken by the American policing system to his concern for his children that will face the same racist circumstances, Kaphar utilizes allusions to current events and rhetorical questions to expose the continuous murdering of the Black community and the fear posed by American authority. With a defeated sense of honesty, Kaphar recounts a small list of police brutality victims and cries out, questioning,

if Michael,
Sandra,
Travon,
Tamir,
Breonna and
Now George Floyd…
can be murdered
and nothing changes…
wouldn’t it be foolish to remain hopeful? (Kaphar, lines 18-26)

When Kaphar gives each victim’s name an entire line in his poem, he forces readers to focus on the immense space on the paper that the lines fill, illustrating his despair that repeats itself with every name listed and creating a cyclical rhythm. His use of repetition with ellipses creates moments of silence which allows the reader to pause and empathize with the “foolish[ness]” he feels when he attempts hope, revealing how useless optimism is in the face of a rampant and violent cycle of racism. Kaphar then begins to explain to readers how his loss of hope has him dreading to ask,

How do I explain to my children that the very system set up to protect others could be a threat to our existence?
How do I shield them from the psychological impact of knowing that for the rest of our lives we will likely be seen as a threat,
and for that
We may die? (Kaphar, lines 36-39).

Kaphar’s immense questions regarding how he is to tell his children that “the very system set up to protect others” will see them “as a threat” explores the irony of the American justice system and instills in readers the same heaviness that the never-ending murders weigh upon him. This emotional appeal surrounding his children begs the reader to think of the future shortly after reading the names of those in the past lost to the police, further suggesting that he believes the cycle of unjust killings in America will continue to proliferate. With the honoring of the dead and the concern for posterity, Kaphar creates the image of a cycle of racism for readers and the suffering brought with it that weighs upon the Black community in America.

Kaphar then shifts to focus specifically on the Black mother and how her steady tenacity amidst the cycle of hopelessness inspires and leads him, honoring Black mothers in America as leaders and sources of strength, power, and comfort. Despite the desolate emotions Kaphar describes through his previous questions, he shares with audiences that he finds “solace” in the Black mother that “walks [him] through the flames of rage” and pain brought upon by the police murderings (Kaphar, lines 57 and 60). The image of fire conjures feelings of “rage” but also warmth and comfort. Kaphar uses the duality of fire to reflect how Black mothers are burdened by the role of the maternal figure, who is responsible for caring for her surroundings, and the mourner, who bears the sorrow and anger accompanying the murder of Black children by the police. By showing readers how Black mothers must play two roles, he allows them to realize the same “solace” and respect he feels for these women. Both the mother and Kaphar share rage, but she is the protector that leads him through the flames. After exploring the rage and dread surrounding his current state of mind, Kaphar ends his poem by revealing his clear objective, declaring,

One
Black
mother’s
loss
WILL
be
memorialized.
This time
I will not let her go.
I
can not
sell
you
this
painting. (Kaphar, lines 69-83)

Kaphar again allows his words dedicated to the Black mother to fill the majority of the page and finally gives her the space to be honored and recognized as one who gracefully and powerfully carries the burdens he explores with the fire metaphor. The last sentence of his poem mirrors the opening of the piece as he repeats the word “sell.” The refusal to “sell” the painting to the readers reveals Kaphar’s goal to give Black mothers the respect they deserve, free of any ties or ownership. In recognizing the Black mother’s unbelievably heavy responsibilities in society, Kaphar leads and urges readers to listen to the voices often silenced by their burdens.

In bringing the Black mother from the text to life through an intimate painting, Kaphar appeals to readers’ sympathy through realistic textures and intentional color contrasts to instill in them a reverence for her. Immediately, Kaphar’s audience is drawn to the mother’s sorrowfully solemn expression and “furrowed brow” placed at the upper center of the cover (Kaphar, line 11). Kaphar closes the mother’s eyes, stripping her of her sight and allowing the audience to know that they are witnesses to a moment of immense vulnerability. In being in the presence of such vulnerability, readers are pushed to assume a reverent silence for the mother in the painting. Below her face, the mother’s hands, one skin toned and the other bright blue, gingerly coddle “the contour of her loss”––the silhouette of her child (Kaphar, line 12). Through the contrasting coloring of hands, Kaphar explores the mother’s two roles again, with the skin-toned hand placed over her and the child’s heart representing the comforter and the blue hand supporting the child from below as the mourner. Her two hands also explore the meaning of the painting, “Analogous Colors,” as the skin-toned hand represents “black” and the blue hand represents “loss” (Kaphar, line 14). It is also important to note that the mother is dressed in a casual sweatshirt. While Kaphar wants readers to recognize and respect the Black mother, he does not place her above the audience. Rather, he wants them to finally acknowledge her as an equal and an individual––as a person with a complex emotional capacity capable of both strength and vulnerability. By first establishing a connection between the mother and the audience and then conveying her complexity through her multicolored hands, Kaphar gains the reader’s understanding and therefore their empathy for the mother.

Kaphar’s dual purpose to expose the cycle of racism within the policing system and to honor Black mothers amidst the painful and hopeless month of June 2020 ironically instills hope in his American audience by showing them that even in destruction, creation prevails through his painting. This implicit result of “Analogous Colors”/“I Cannot Sell You This Painting” carries onto 2021 and acknowledges that though the rampant reaches of racism in America will not cease immediately, it is important to look forward and use creative outlets, such as painting and poetry, to let others know they are not alone in their suffering. Kaphar teaches his audience that their feelings of loss are not solitary; he shares his agony with them.

Sophia Labrador is a Computer Science major originally from Pasadena, California, currently living in McGlinn Hall. This year, her Writing and Rhetoric class studied the industrial prison system and its obvious and unexpected consequences. Thus, Sophia’s rhetorical analysis of Titus Kaphar’s Analogous Colors/”I Cannot Sell You This Painting” was inspired primarily by her look into the prison industrial system, though also in part by Kaphar’s striking portrayals of loss in his paintings. Sophia would like to thank Professor Sally Hansen for her guidance and encouragement throughout the creation of the essay.