A Maquette Made of Oil 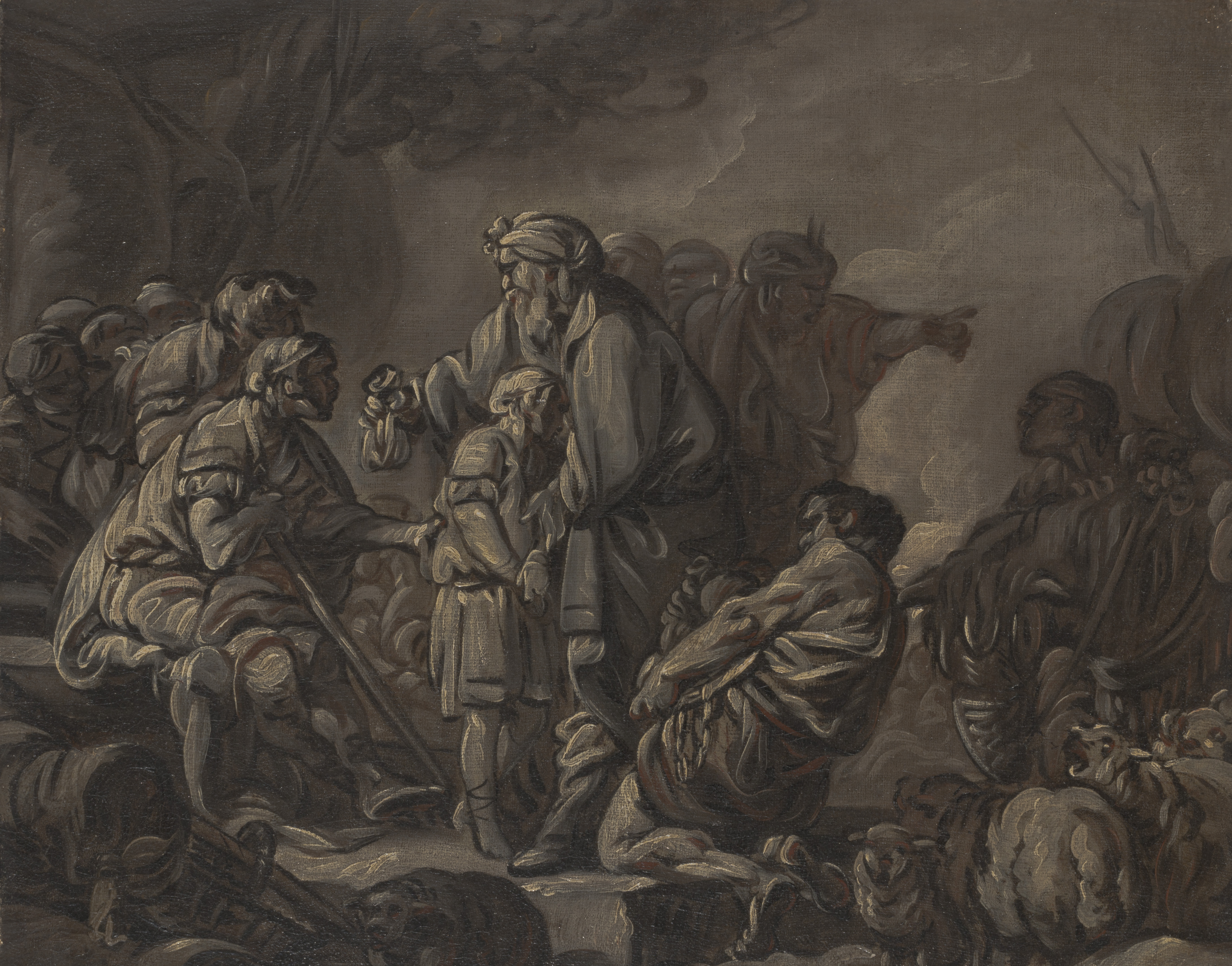 Jean Baptiste Deshays was a respected Baroque and specifically Rococo-period painter trained and recognized by the Parisian art Académie as a sort of prodigy. Many of his pieces, including Joseph Sold into Bondage by His Brothers (ca. 1760), file as “historic painting,” the most prestigious of the five genres of visual art defined by the Académie (Berman). Huge masterpieces of scenes from classical literature and the Bible comprise the genre. Deshays counted Francois Boucher as one of his mentors and father-in-law, with modern appraisers even mistakenly attributing his pieces to Boucher, as happened with a sketch of the Virgin Mary’s assumption, Study for the Assumption of the Virgin. Deshays’s works are prone to such misattribution because of his mastery of oil painting and the fact that his career was less widely celebrated and documented than Boucher’s. This is at least partially due to Deshays’s young, accidental death.

However, Deshays diverged significantly from his mentor in his preferred subject matter. Boucher’s career also features many historical paintings, but even contemporary critics noted that he had little interest in exclusively rustic subjects. Boucher’s interest lay with the polished, bucolic images that satisfied the pastoralists of his day. Pastoralism is a yearning for a prosperous and easy Arcadia, an imagined nostalgia that has endured ever since the invention of the city. It might be described by the still-mocked tale of Marie Antoinette putting on the routine of a farmgirl in a custom-built village. Even if her critics exaggerated her activities in her hamlet, they address a long-understood fantasy of taking refuge in a rustic life (Frey). While Boucher became a popular portraitist in the royal court and continues to be a staple of Rococo collectors, Deshays’s interests did not shy from still idealized but less sterile portrayals of rural scenes (Hyde). The later French phrase nostalgie de la boue, or “nostalgia for the mud,” encapsulates a particular aspect of pastoralism—a desire to engage with “lowbrow” and “crude” activities without restraint, which Deshays asks us to do with Joseph Sold into Bondage by His Brothers (Krauss).

Joseph Sold is one of Deshays’s oil sketches never known to have been brought to completion or quite imitated in a later piece in its composition or expression. Even if he never fully refined a particular sketch, Deshays would reanimate his promising drafts in a later commission. For example, he repeatedly tested the motif of a body, dying or dead, draped at the waist over the knee of its mourner or executioner. Such a figure, with his chest-heaving features, can be seen in Deshays’s Tobias Burying the Dead (1763-1765) and Martyrdom of St. Andrew (1758), until it apparently found its perfect use in a now-lost depiction of Saint Benedict, Achilles Lamenting the Death of Patroclus (ca. 1765)

I argue that, in fact, Deshays found Joseph Sold to be perfectly articulate in its crudest state. Artists would occasionally submit pieces in a working stage for display, although, compared to Joseph Sold, they tended to be further rendered in color or greater detail before viewing. Deshays may have realized that finishing the painting to the degree of a typical Rococo scene, lavished with brushstrokes too fine to discern from a distance, would impede the emotional impression of bearing a shameful, dirty action that he had already so successfully produced.

Although coined nearly a century after Deshays’s career, nostalgia de la boue is especially appropriate for this sketch—it appears to be muddy. Shadows and highlights raise from a brownish gray that is much bleaker than the typical midtone wash. The canvas appears almost grimy in person—this stark, undressed dreariness in the otherwise vivid European eighteenth-century gallery is what intrigued me in the Snite. It is currently displayed away from a wall of comparable French oil sketches, studies, and presentations. It lacks the definite pen lines or color range of Deshays’s other preparations, looking less like a painter’s croquis and more like a sculptor’s maquette.

The creation of a maquette continues to be a common drafting stage for sculptors, one that the French Academy standardized and Deshays would have been at least somewhat familiar with. Comparable to a sketch, the maquette is a smaller clay draft of an idea before the final model is molded and cast in plaster before being wrought in stone or metal (Berman). It is notable though, that clay went no further in the academique’s process than drafting. Historically, the Academy and European art intellect largely considered clay fit only for unfinished work. Even today, pottery lacks much of the prestige granted to painting. Clay has faced criticism for being low-brow, at times even a regressive, Freudian parallel to playing with dirt (Schaffner et al).

Deshays again does not shy away from dirt here, giving the narrative of this historic painting in hand-manipulated pulls of muscle and cloth out of the grim background with streaky highlights. The fabrics on the figures are thick and lumpy rather than diaphanous as they might be in the porcelain finishes typical to indulgent, pre-Revolution depictions of even shepherds. Instead of making the scene so dreamy, Deshays’s hand remains visible on the page in rough strokes. This piece is not a transcendent, heavenly lit scene of religious rapture, but remains a very material show of human error.

This medium is appropriate to Joseph’s story, one that is moved, at least when looking merely at the text, primarily by earthly, human hands. At this point in the Bible, significant events in the lives of the Patriarchs have occurred after direct instruction from God. Occurrences displeasing to God, as in Gomorrah or Babel, received an explicit disapproval and often drastic retribution. Genesis 37 features no divine directive; in fact, the Bible never records God speaking directly to Joseph or anointing him as clearly as Abraham or Jacob before him. Joseph’s particular cycle of loss and reconciliation is set into motion by a series of mundane, human reactions, beginning with Jacobs’s preexisting favoritism for this son of Rachel over Leah’s children. Joseph’s dreams of future grandeur only help to provoke his brothers to what was initially a murder attempt.

Almost central in the painting is Joseph bound at the wrists. He has one of the less-detailed faces in the painting, as if smudged away under a thumb. The boy is particularly diminutive here, between and beneath the men dealing for his freedom. in the under-arch of the otherwise rendered central interaction of the painting, the exchange of money. He is desperately alone in this moment, with no assurance but faith that God might keep the promises of his dreams, much less the covenant of his father, valid. Despite being one of the more blameless figures in the image, his face is the only one hidden in shameful shadow, silent. A lamb to the right of the canvas cries out in his stead, eye made wild with one of the few spots of glossy white in the image. The lamb is one of the painting’s few allegories to other paschal sacrifices in the Bible, notably Jesus.

The “clay” that forms Joseph is smooth, juxtaposed and resigned to the resolute, white-streaked sinew of the men bargaining his fate. Joseph is weaker than them, and weaker than the more powerful forces that eventually take him to his exaltation. But in this moment, the power lies in the trunk of the arm with a sturdy grip on Joseph. The dealing brother is concerned first with shoving Joseph into the trader’s arms and disposing of the object of his jealous rivalry. He hasn’t even reached for the payment, only just now seeing that it is there.

Moving down and to the right of the murky image, we see that the brothers hand Joseph off into a darker, cloudy scene of burden and labor where a man may be gesturing and yelling an order to who may be another recently acquired slave. Joseph is no longer free, moving down to the status of these misshapen forms people and beasts relegated to toil and sacrifice. It is worth noting that this scene is not too far down from where Joseph’s brothers recline. Sheep and the garbled goods of the traders amass on their side of the canvas, foretelling their need later to lower themselves in the coming years, before Joseph.

Buttressing the trader is a man kneeling with a heavy load, likely also in bondage. He appears to have been molded as an extension of the aforementioned burden scene beyond, holding some of the trader’s riches with a sharply sculpted chain of jewelry slipping from the bag. He physically bears the trader’s unwieldy moral burden of money gained in other immoral deals. Deshays also juxtaposes the visibly solid bag with a far tinier pouch about to slip through the trader’s hands. This is all that Joseph—the later savior of his family—is worth right now, a motif repeated endlessly in portrayals of Judas’s payment for Jesus’s arrest.

Deshays may have realized that this exceptionally human-driven story of the Old Testament was most truthfully pictured in a tangible, unprocessed way. Here, he is not painting shepherds drifting across dreamy green pastures. Deshays is taking a broken, sinful action out of the Scripture and, on the canvas, sculpting human imperfection out of something as regressive, malleable, and imperfect as clay.

Berman, Daniella. “The Formation of a French School: the Royal Academy of Painting and Sculpture.” Smarthistory: The Center for Public Art History, https://smarthistory.org/royal-academy-france/.

Samantha François is an architecture major originally from Florida. She hopes to explore how her love for design and the fine arts can improve our well-being in the buildings and spaces we inhabit. After originally intending to write about pottery, Samantha saw “clay” in Joseph Sold into Bondage by His Brothers used as a mode of expression to match such a murky point in the Biblical narrative. Her essay speculates that Jean-Baptiste Deshays figuratively put down his Rococo palette to sculpt an apparent absence of human goodness. Notre Dame’s art, architecture, and the community that makes it have made Samantha consider how people seek out and illustrate their relationships to one another and the divine. She gives particular thanks to her Foundations of Theology professor and TA, Fr. Kevin Grove and Kyle Dillon.