Working in the Heights 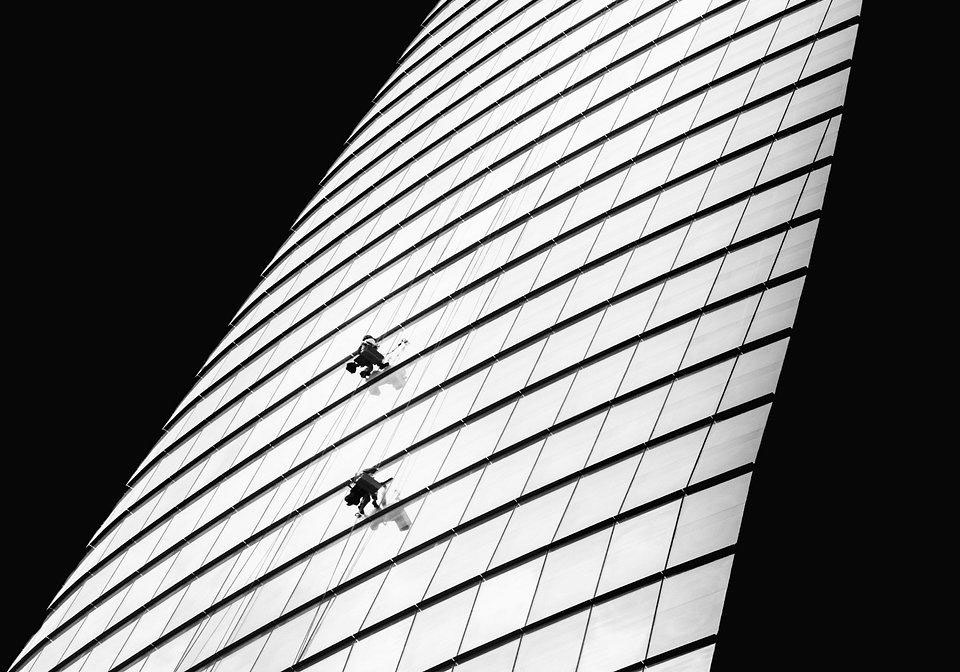 "Working in the Heights," by @phamhuytrung, Vietnam

Dangled off a skyscraper’s side and one mistake away from meeting their maker, two men begin their nine-to-five in the photo “Working in the Heights,” by @phamhuytrung. At first glance, however, the photo hides the ordinary scene of two window washers working. The black and white image removes the viewer’s familiarity with the scene. An empty black void replaces the typically sunny blue sky and fluffy white clouds. The building appears more like a steel knife than a skyscraper due to its sharp grey edges starkly contrasted against the black background. The viewer gazes up towards the building. Their eyes follow the building’s edges to the sharp meeting at the top. Then, scanning back down the image, the viewer finally locates the two black blobs upon building: the men working. They are the focal point of the image. The workers provide a reference point for understanding the scene, and the building’s sheer size becomes apparent. Suddenly, the viewer is aware of the height’s imminent threat to the worker. Nevertheless, the men are unfazed by the drop beneath them. They move row by row, window by window, focused on the task at hand. They carry on working normally in an abnormal, dangerous, and jarring scene. The photographer of “Working in the Heights” forces the viewer to reimagine the quotidian by manipulating the coloring, the framing, the details, and the gaze of the photo.

“Working in the Heights” was submitted to the #Work2020 photo contest held by Agora, an international photography app. The competition drew around ten-thousand submissions by amateur and professional photographers; “Working in the Heights” was a finalist and saw a global audience of photographers on Agora Vote. The photographers sought to answer the question “What does work mean?” Other photographers reaffirmed the commonly accepted views of work. For example, some photographers, like the creator of “Work in the Office,” reflected the mundane nature of work using dull colors, workers slumped over computers, rigid walls dividing coworkers. Other photographers attempted to show the arduous quality of work. However, instead of reinforcing beliefs about work, @phamhuytrung creatively answers the question by reframing the commonplaces about work held by a modern audience. The photo morphs a commonly accepted definition of work—a dull burden one bears—into an active risk one accepts to survive.

To advance this claim, the photographer’s most consequential choice with the image was altering the coloring and lighting. After capturing the original image, the photographer changed the naturally colored scene to black-and-white color scale. In addition to editing the coloring, the artist altered the lighting: this darkens the blacks and enhances the whites. These two choices work together to heighten the contrast in the photo so that the metallic grey face of the building floats upon the black background like a raft in the open ocean. Simply put, the image pops. It captivates the viewer until they ultimately can find the subjects of the photo. In this way, the coloring and lighting are like the hooks of a mystery novel. For crafting the definition of work, these choices are essential because it disorients the viewer. If the viewer saw the unedited version of the photo, it would require little thought to parse out the subject, and the viewer’s preconceived definition of work would drown out the photographer’s definition. By stripping away the normal scene, the viewer cannot rely on their normal definition of work. Instead, the photo forces them to rethink their definition and come to terms with the photographer’s definition in the photo that work is a risk.

Additionally, in the competition’s context, the changes to coloring and lighting are especially effective because it stands out against the thousands of other submissions. While other photos have obvious scenes and subjects, “Working in the Heights” is unfamiliar due to the edits. It requires more attention to understand the window-washing scene. Therefore, the more time and attention it seizes, the more weight it has in voting. What otherwise is a dull scene—workers set far from the camera cleaning windows on a skyscraper—becomes a finalist in a photography competition because of the choice to use black and white and alter the image’s lighting.

While the black and white increases contrast and makes the image more interesting, the photo’s framing creates a compelling subject and helps defines work. To take the photo, the photographer initially had to line up the shot. Rather than lining up the worker and building in a straight shot on the building, the photographer opts to take the shot off-center. This shift sharpens the close edge of the building increasing the contrast between the building and background. Simultaneously, the move also lends depth to the workers hanging from the side of the skyscraper. As one of the few details with depth on the two-dimensional face of the building, it helps guide and focus the viewer upon the workers who are the main subjects of the photo. Furthermore, the camera angle gives the perspective on the magnitude of the building, and therefore, the dangerous position, which the workers regularly place themselves. Finally, the angle produces a diagonal line along the building’s edge symbolizing the instability of the workers’ position in the photo.

In one fell swoop, the photographer creates a captivating picture and presents its original definition of work for the audience. The photographer anticipates how other photographers will evaluate the photo. The move demonstrates that this is an advanced photographer because such a subtle move, like changing the angle, makes the photo vastly more interesting. Due to the subtle choice to improve the photo, it will grab more attention from professional photographers in the voting pool. Second, the heightened drama of the scene, created by the camera angle, helps craft the definition of work. By looking upward at the workers, the height is more apparent, the danger is clearer, and the work seems crazier. Seeing men cleaning windows of tall buildings is normal to the modern viewer, yet it is anything but normal. The men work one misstep away from their coffin for the sake of clean windows. All the while, they make much less than what they risk. The photographer’s emphasis on the risk is key to their definition of work. To the photographer, work is a gamble one undertakes every day and eventually acclimates to just to provide for themselves and their families. This definition challenges commonly held definitions of work. It compels the modern audience, who often take for granted the window washers and other laborers of the world, to rethink the world they live in and even question the values of a society that put lives in danger for clean windows. Regarding the photo competition, this definition is vastly more effective and exciting than any submission from a cubicle, which would only reinforce the viewer commonplaces about work. Therefore, by cultivating deeper thinking amongst the modern audience, the photo gains favor in the voting. With one elegant alteration of orientation, the photographer effectively reimagines the audience’s definition of work and consequently wins more of the vote.

While on a general level, the photographer’s decisions overall work to produce a more interesting picture to view, the specifics such as the gaze and the details of the piece mostly help develop and reinforce the definition of work. The gaze—where the workers are looking and whether they notice the camera—is significant. In this case, they do not notice the camera, and they look only upon their work. The workers do not look down; they ignore the drop. Their gaze shows they are numb to the risks of their roles, which reinforces the definition of work presented by the photographer. Although it is a small element, it is essential for genuinely capturing their work. A more noticeable choice of the photographer is emphasizing the horizontal lines the windows create. The lines share the same black as the void behind, and thus the same level of contrast with the light face of the building. These horizontal static lines are surrounded by the diagonal lines of the edges reflecting the workers’ calm, comfortable, and stable positions despite working in an unstable and hazardous position. The choice to emphasize this detail by contrasting the lines helps tie together the photographer’s definition of work—a reality we accept despite the possible danger. Crafting this implicit definition of work with the image is particularly useful in the competition as critical observers appreciate the more intriguing definition over a basic example of work. The details of the picture solidify the definition of work and set the photograph apart from other basic submissions.

When posed the simple question, “What does work mean?” the photographer of “Working in the Heights” answered in a novel way. The photographer removed all the viewer’s familiarity with the scene and made the normal scene strange. By doing this, the viewer could gain new perspectives on what work is and the modern world, which challenged some of the commonly accepted definitions of work. Ultimately, with a such a visually appealing photo and an equally interesting answer to the question of work, the photographer of “Working in the Heights” leads the viewer to question their commonplace beliefs about work.

Liam Holland is from Braintree, Massachusetts and now lives in Sorin Hall. He majors in Aerospace Engineering and plans to take on a second major in English through the Reilly Program. After graduation, he hopes to attend graduate school for a Master’s in Aerospace Engineering. Drawn to the black and white photo, his essay, “Working in the Heights,” is an in-depth analysis of the rhetorical choices and its answer to the question, "What does work mean?" The essay focuses upon how the author reframes conventional thinking about work in life through their stylistic choices. In particular, he concentrates upon the precariousness of the worker’s position dangled against the skyscraper and the absurdity that such line of work, for the sake of cleaning windows, is acceptable. Liam wishes to give thanks to his Writing and Rhetoric professor, Dr. Caitlin Smith, for all the feedback and encouragement on this essay.