What It Means to Be Pretty 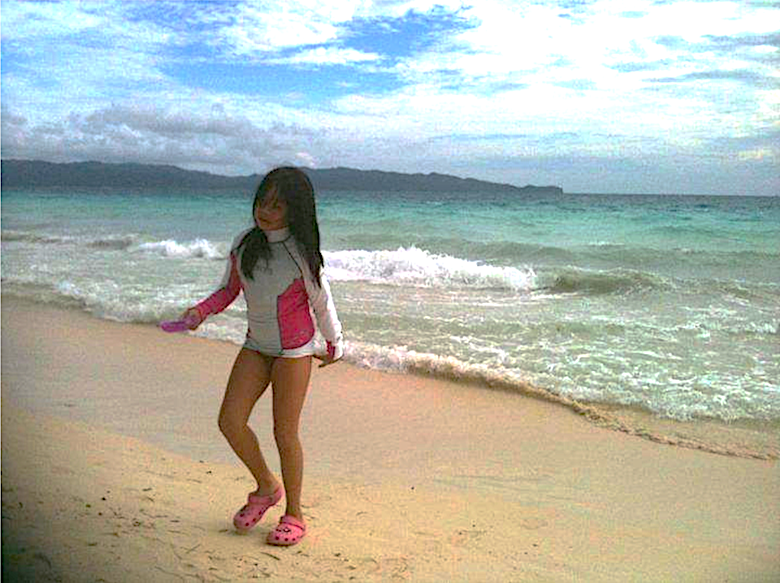 Fig. 1, The author in her youth, on the sandy beaches of Boracay

We often find that our experiences as children inform many of our actions later in life—from nail-biting to pulling out the split ends of my hair. Over time, though, I learned that childhood did not only influence physical, outward habits, but also the way that I view the rest of the world. I often caught myself staring in the mirror as a young girl, scrutinizing every aspect of my distinctly Filipino appearance, wishing that the face that gazed back would look like the faces plastered on the billboards that line our highways in the Philippines. Being Filipino, to me, for so long meant wishing that I didn’t look like one. The praise of “pretty” in the Philippines has always been awarded to a specific type of girl, and throughout my life, attitudes in my country—attitudes that I myself have blindly succumbed to—have reminded me that that girl was not and will never be me.

I learned what it meant to be pretty when I was four in the white sandy beaches of Boracay. The sun was shining brightly above us, and the sea and the sky were competing on who could be more blue. It was a glorious sight for my preschool self. My family decided to take a vacation there for the summer, and I was ready to have the best time of my life. I had my round belly poking out of my blue speedo, pink crocs on my feet, and a pail and shovel in my hands as I stared wide-eyed at the shore. Taking in the smell of the salt air, I took a step out of the cabana, but a sharp tug on my arm quickly pulled me back. My mother, with a stern look, held me close as she smothered a greasy layer of sunblock all over my body and face. Laughs and screams echoed from down the beach; the other kids were already playing, but there I was, under the shade, waiting for the sunblock to dry.

I learned what it meant to be pretty the next day when the pinkish glow of a sunburn on my skin turned into a deep tan. My mother reminded me to come back to her for another layer of sunblock every hour or else “Iitim ka!” [You’ll get dark!], she would warn me. Somehow understanding that was a bad thing, I did as I was told. For the first few hours, after getting a good amount of sea water down my throat and a handful of sand in my swimsuit, my bare feet would traverse the gritty terrain towards my mother who already had a dollop of sunblock prepared on her hand. However, I was four and easily distracted. Burying my brother into the ground and giving him a mermaid’s tail was much more entertaining than an extra layer of SPF. Before I knew it, the sun was down, the sky was turning red, and my skin was changing color too.

I learned what it meant to be pretty when I looked at the mirror at four years old and felt my eyes swell with tears. Seeing the deep brown tan that the sun had left upon my skin, my mom burst into mocking laughter. “Ang itim mo na!” [You’ve gotten so dark!], she said, inspecting my face closely; she wasn’t the only one who noticed. In fact, I was the center of attention that entire night—a dark brown target for my family to poke fun at. Jokes like “Kamukha mo na si yaya” [You look like the maids] and “Di ka na gaganda” [You’re not pretty anymore] were thrown at me—at my skin—throughout that evening. They were just jokes, though. Harmless jokes. Jokes that made me think I was irredeemably ugly. Jokes that made me afraid to go under the sun. Jokes that led me to go back to school hiding my face behind a large handkerchief placed atop my head because I was too afraid to be made fun of again.

I was only four years old, and yet I already understood the remarkably close relationship between one’s skin color and beauty—in that only those with light skin deserve to be called “pretty.” This was a reality not only made apparent by my family but also made so blatantly obvious everywhere in my country. Anywhere you go, the concept of fairer skin being superior follows you around with big name brands exploiting these same cultural expectations. In the Philippines, skin-whitening advertisements bombard our televisions, magazines, and billboards while a vast assortment of skin-whitening products fill up the shelves of our drugstores. Fair skin is not just fair skin. Rather, it is a status symbol—a currency—that disenfranchises the natural color of many Filipinos: the color of kayumanggi (dark brown).

Dark brown Filipinos often serve as the before picture on beauty ads. Their skin is depicted as something that should be changed and something that, once gone, will improve their quality of life. This can be seen in the typical narrative that skin-whitening ads like to tell: a girl with dark skin struggles with life, the girl is introduced to product X, the girl whitens her skin with product X, and finally, the girl lives happily ever after. This seemingly ridiculous storyline is the narrative I grew up with, the narrative that was repeatedly embedded into my brain from the moment I was born. The appeal of fair skin was a message impossible to escape. Even now, in a time of increasing acceptance of different standards of beauty, this message continues to invade various aspects of my life, making it extremely difficult to convince myself of its absurdity, though I know it is absurd.

One such absurd whitening ad that particularly struck a chord with me was GlutaMAX’s 2019 social media campaign. Scrolling through my Twitter newsfeed, I stumbled upon a thread of photos posted by the GlutaMAX account. Immediately catching my eye was the first photo which read “Maputi lang, pinaupo na sa bus?” (“Just because she’s fair-skinned, she is given a seat on the bus?”). The following photos then depict a dark-skinned Filipina—her chin down, mouth agape, and eyebrows furrowed—looking at the fair-skinned woman opposite her with envy. Beside the dark-skinned woman were the words “Unfair ‘di ba?” (“Unfair, right?”) while beside the light-skinned woman were the captions “Wag ka magalit, mag-GlutaMAX!” (“Don’t be mad, use GlutaMAX!”) and “Your fair advantage.” This single post gives us a tiny but nonetheless painful glimpse of the toxic beauty standards that dominate my country. Based on this advertisement, dark skin is considered to be a disadvantage while light skin is something one should covet. And so, brands like GlutaMAX tell us to erase the pigment of our skin—bleach it away—in order to be considered beautiful and thus be respected by others.

As I grew older though, I quickly learned that being fair-skinned was not the only determinant of beauty in the Philippines. Upon entering middle school, I soon realized that, to truly be regarded as beautiful, one had to depart from the Filipino look altogether. Here, I was introduced to another class of Filipinos called “meztizas” and “meztizos”, Filipino men and women blessed with features of European descent. These people were tall, their noses pointed, their hair gold, and their eyes sometimes a cool blue. Though I could avoid the sun and possess the privilege of fair skin, my other distinctly Filipino features were ones I was unfortunately born with—ones that couldn’t be so easily changed. Thus, I was stuck with an appearance constantly belittled by my own community—a look that, by their standards, could not compare with Westernized features.

The preference for Western beauty was obvious in the way Filipinos interacted with people who achieved such a standard. In my high school, every time there was a new student who possessed the highly desired meztiza look, like Alyssa who was half-British or Amaya who was half-Spanish, they would immediately attract the entire school’s attention. Everyone would be in instant agreement about their striking beauty. I’m not saying they weren’t beautiful though—they certainly were—but the type of awe and praise we would reward their appearance was almost laughable if not ridiculous. Once the principal would introduce the foreign-looking new student before the school, everyone would begin crowding the perimeter to take an eager look. We would gawk, stare, and mumble praises as if there was a celebrity gracing us with her presence—a reaction definitely not rewarded to just any Filipino girl.

It is important to realize the cause and effect relationship in all this. Meztizas are beautiful because of the simple fact that they are meztizas. It is because of their Western descent that they possess a face supposedly superior to that of a pure Filipino. It is a standard of beauty that is especially difficult because it requires the impossible task of altering the ethnicity one was born with. Though unattainable, many Filipinos, including myself, still try. I remember obsessively researching ways to lighten the pigment of my hair and eyes. Hours were wasted on watching YouTube tutorials and reading random how-to websites for recipes that promised to achieve the light brown color I desired. I also spent too many nights in front of the mirror pinching the bridge of my nose in an attempt to mold it like clay. I didn’t want to look like myself. I didn’t want to look like a Filipino. What I wanted was Alyssa’s blonde hair and Amaya’s hazelnut eyes—not the plain, boring black I was born with.

Nonetheless, all my attempts to conform to this “perfect” image were all for not. I couldn’t physically make myself look less Filipino simply because I am one, and this reality, though obvious, is something that has taken me years to come to terms with. Now eighteen, I admit that I still sometimes struggle with the insecurities of my childhood and that I’m still continuously learning what it means to be pretty. I still face the mirror, at times, unhappy with what I see—pinching and poking the aspects of my appearance I would like to change. Maybe eyebrows could be less bushy, my cheeks less chubby, and my jawline more defined. However, when I stare at the mirror now, thinking all this, something seems to be different—a newfound acceptance for my ethnicity.

Instead of shunning the distinctly Filipino features I was born with, I am learning to embrace them as an integral part of my identity. I no longer dread my black hair nor my dark brown eyes nor the fact that my skin easily tans under the sun. Despite all the commercials and advertisements telling me otherwise, I have come to accept and even take pride in looking Filipino. Maybe it’s because there has been more diversity in the beauty industry or maybe it’s because I simply gave up on changing how I look. All I know is that I look at the mirror now and see a Filipino, happy to see one. I just wish it didn’t take me so long to get to this point, and I wish society didn’t make it so hard for other people to do the same, because four-year-old girls on the beach should be playing on the beach and not worrying about the tan of their skin—not worrying about the fickle concept of “pretty.”

Mia is a Business Analytics Major from Manila, Philippines. After graduation, Mia hopes to go into the fashion industry where she can merge her interests in business and style. In her piece "What It Means to Be Pretty," Mia reflects on her struggles with the toxic beauty standards of her country and shares her rocky journey towards self-acceptance. Mia would like to thank her Writing and Rhetoric professor, Jessica Shumake, for guiding her throughout the writing process of this personal piece.