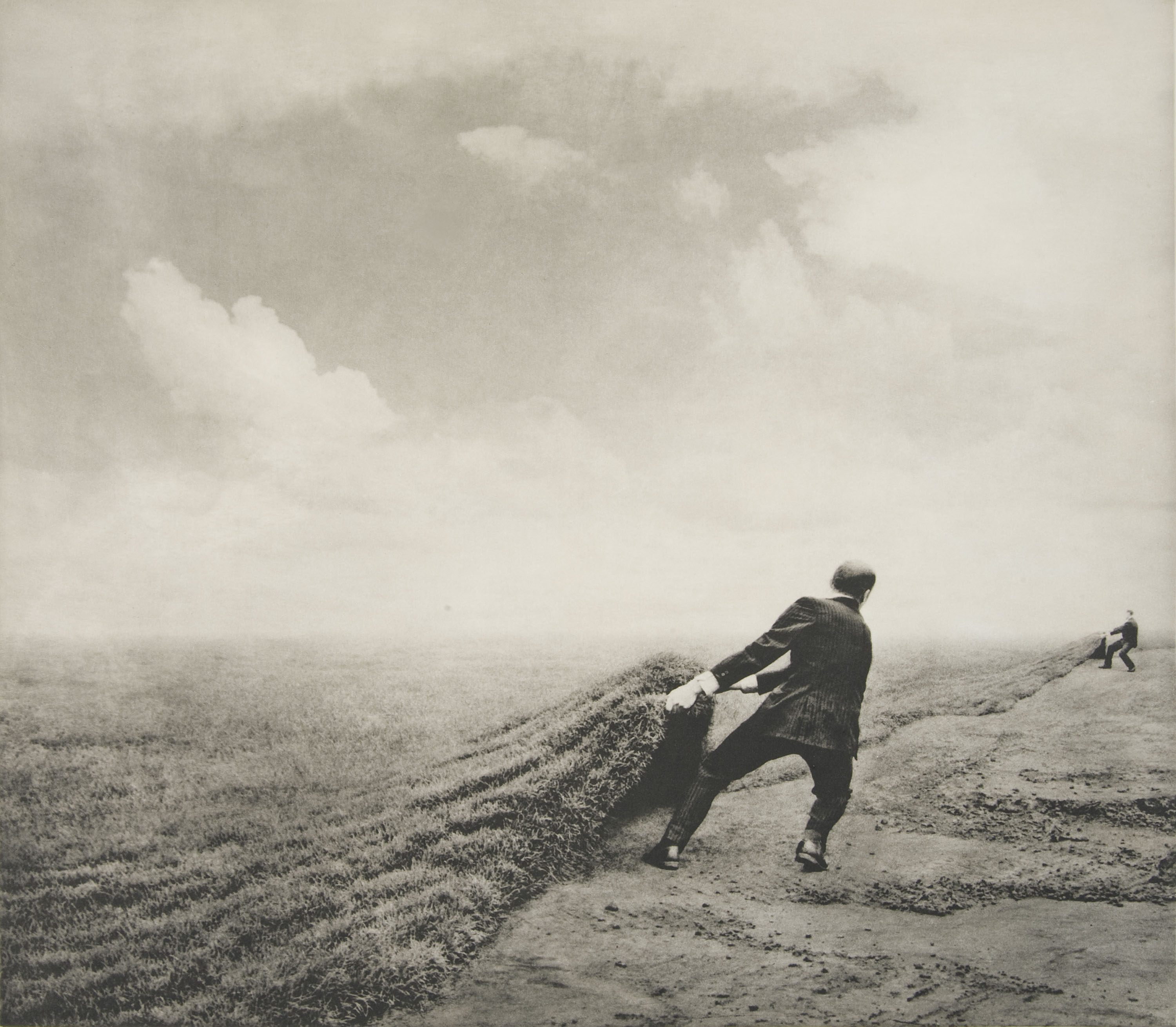 Reclamation by Shana and Robert ParkeHarrison looks to me like the embodiment of desolation. Everything about it feels desolate, starting with the two men pulling and trudging, polished dress shoes planted firmly in the finely milled soil. Look at the way they lean with all their might, knees bent and arms heaving and fingers grasping the thick carpet of grass that expands far into the distance. Their goal is clear: to drag that sweeping stretch of greenery across the depleted soil that precedes them. But why this is their goal, I do not know. Despite the magnitude of this endeavor, it is just the two of them. Not another soul in sight. And while the task at hand already seems daunting enough in their lack of assistance, the ambiguous skyline, hidden behind plumes of dust and haze, only adds to this effect. The seemingly never ending horizon suggests a never-ending-ness to their pursuits, an unattainability—desolation.

To make matters worse, the men are clearly too far apart to at least provide each other sufficient company to ease their grim circumstances. All they do is look at one another across the barren land that divides them. Maybe no words are needed, maybe their work is an unspoken pact. Or maybe they just never thought to communicate about it at all.

I do not know who they are, maybe politicians, maybe businessmen. Regardless, they seem completely out of their element with their crisp-ironed corporate attire in the middle of dust ridden plain lands. How odd to see such men doing the manual labor for once. I would expect them to instead sit high up at the top of an urban skyscraper, their pinstripe suits amongst cushioned leather chairs and marble floors and turbo-blast air conditioning. But here they are, in the open air—musty and saturated with soot, their once man-made carpet now replaced by tufts of grass, their marble floors filthy sod. Still, they keep safe enough distance from the land beneath their feet, and their bare skin remains shielded by synthetic thread armor.

When I look at this picture, with its two men in business attire, barren plains, depressed soil, and heavy grass carpet, I feel desolation. But I also can’t help but wonder why. Why does the grass exist so separately from the soil over which it is planted? And how about these men, why must their dress shoes and pearl white gloves protect them from the nature they tend to? And what about the distance between the two of them? Why do they remain so isolated in their work, despite having the same goal in mind?

In the midst of these questions, I realize there is a thread of disconnection throughout the whole image...between man and man, man and turf, turf and soil. Maybe this is where this desolate feeling comes from. Not merely in the barren abyss, but more likely, in the solitude, the isolation, the loneliness of it all.

Can these two men, or anyone for that matter, achieve their desired goals amidst disconnection between each other, and between that which they strive to reclaim?

Maybe given this specific circumstance, you would easily say no, obviously just the two of them cannot pull acres of turf over depleted soil. But what then? Is this not exactly what we witness everyday, what keeps our world spinning? Is this not our government, the top down approach? The policy makers who speak on behalf of the ones the policy is created for? Is this not our economy, run by corporations and the man who sits at the top of the skyscraper and looks down through tinted windows at the world beneath him? Is this not our justice system, bureaucracy and laws and institutions and complex structures where the one at the bottom, where the human, the interpersonal, gets lost? I certainly think it is. And maybe that’s the most desolate part of it all.

But also, maybe that’s the point. Maybe disconnection, between humans, between the work we do, is where many of our problems as a society come from. More importantly, maybe it is something that we can change. Beginning with this picture, beginning with Reclamation. So these businessmen work to roll out the carpet. They are simply falling victim to society’s top down approach. Perhaps if they would take the time, the care, the money, they would realize it is not a carpet they tug, but life. Life that takes root, that needs nutrients, that grows. They would realize it must begin from the bottom up, it must begin with soil. And just like grass grows from the root, so does every movement worth change.

In order for the sustainability movement to take root, it must begin from the bottom up. As much as politicians and big corporations strive to catalyze change, the top down approach lacks that essential, intangible connection needed to empower genuine, patient, long term action. Amid the disconnection where pinstripe suits and marble floors and synthetic fibers meet sod and soot and grass, our innate relationship with nature gets lost. Rather, the movement is driven by the logistics of money and efficiency, and nature is held separate, something to reclaim rather than to rekindle. The purpose for change gets lost in necessity rather than respect for our planet.

That intangible connection, the genuine love for the Earth, is the missing link between our connection to nature, and between our connection to each other. Our shared belonging to nature has the power to unite people towards real change. And this connection, this united movement between people with a common goal and a common driving force, is essential in order to take a seemingly impossible task, filled with desolation and despair, and transform it into one of hope.

So, what if we let go of this top-down approach? What if instead we developed grassroots change?

The men strip their stiff, polished dress shoes and pearly white gloves. On hands and knees, they kneel to Mother Earth. Her soft sediment gently embraces the folds of their bare toes and the crevices of their fingertips. Like the seeds which they plant, the men are one with the soil once more. They work side by side, a whole lot of them, smiling as they rekindle their intimate connection with each other, and with the Earth that once claimed them. And in the midst of it, there is unity, between man and man, man and turf, turf and soil. A reconnection to the planet we call home, a Reclamation of our innate belonging to the earth beneath our feet.

Trinity Cha is from Orange County, California and is studying Finance with a minor in Data Science. Although she has never considered humanities an especially strong suit of hers, she has really enjoyed all her writing classes at Notre Dame. She loves looking at things through her own lens and sharing that perspective with others. She especially enjoyed writing this meditation essay, because it provided flexibility for both deeper analysis and artistic expression. She strives to bring this mix of analytical thinking and creativity to everything she does.