Finding Consistency in the Inconsistent 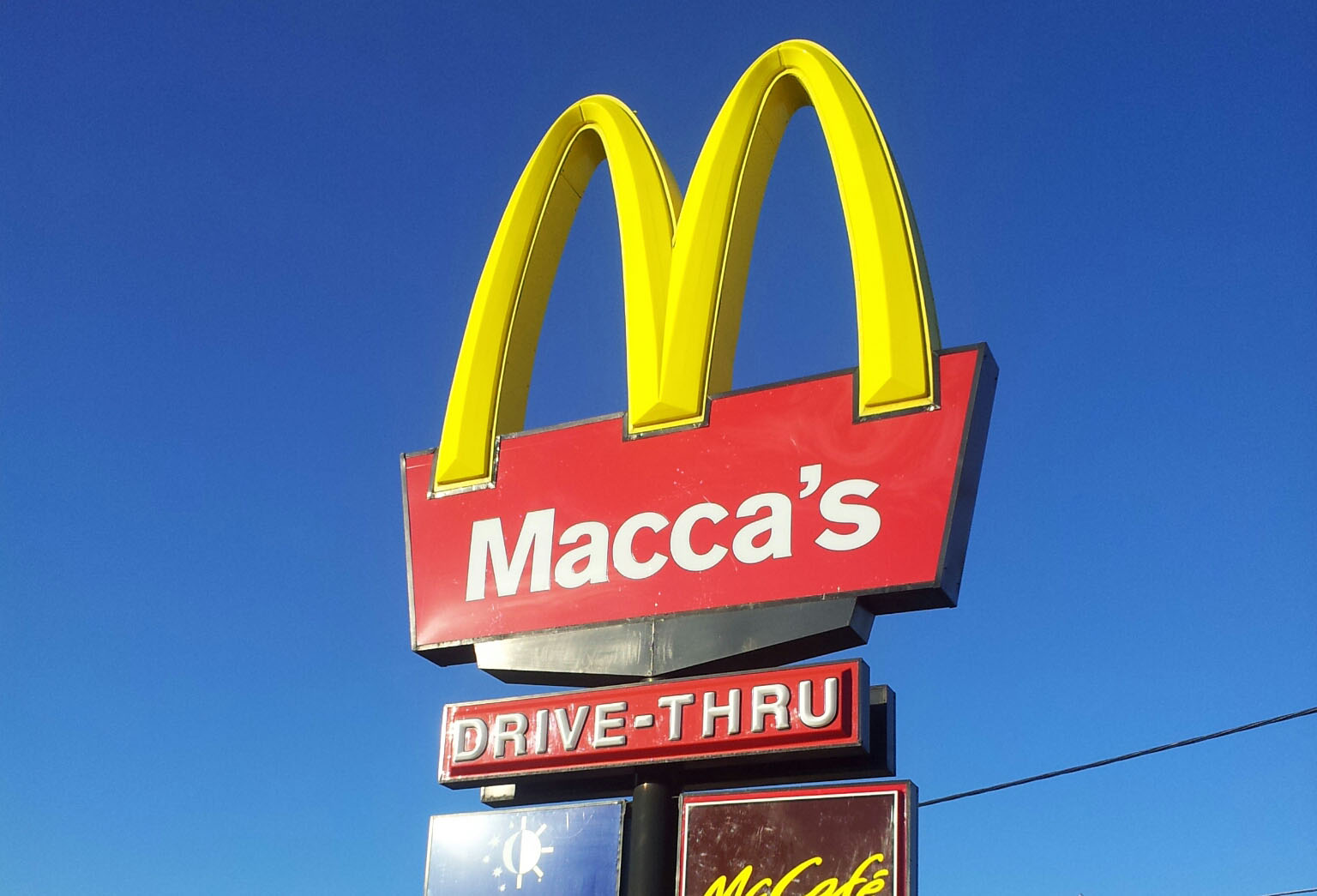 Macca's, the nickname for McDonald's in Australia

Walking with stiff legs and my eyes trained on the floor, I slowly glanced up to make sure I wasn’t about to make a fatal collision. The bustling hallway was full of girls rushing with books in their arms, eager to get to their class early, or to catch a couple of minutes of socializing before the day started. I squeezed past them, my heart thumping loudly as I too, rushed to get to my first class of the day, just a little less eager. Upon reaching the room at the end of the hallway on the second floor, I quickly opened the door and slid silently into my seat in the corner. The only friend I had made in my two weeks in Australia greeted me with a cheerful smile.

“Hey!” Jade said in the accent that was starting to make me feel lonely.

I mustered up a cheap smile and greeted her back. “Good morning!”

The rest of the morning was packed full with classes, and when it got to lunchtime, I shakily sat down with my friend and the rest of her group, which I could only call acquaintances.

Trying to find my “normal” in the two weeks since I had moved was nearly impossible. Everything there was unfamiliar or new. I wasn’t able to instantly embrace the slang of my classmates, nor find that cultural connection. Our rented house was always dark inside and as empty as one’s chest cavity until late at night, with my sisters at school or in afternoon programs, and my parents at work. There was no need for us to purchase Wi-Fi either, when the library was just a tram ride away. And every single day, I struggled with the idea that I wasn’t able to contact my friends back at home for a bit of consistency. Especially due to our time difference, they tended to be asleep when I was awake and vice versa. When the school day ended, I would rush to the library in hopes of being able to maybe catch a few friends who were still up late, but nonetheless, that never happened. Then, one day, I realized the only time that we would be awake at the same time was during lunchtime at school.

The following day, at lunch, I quickly finished my sandwich and quietly pulled out my laptop, hoping that none of the six pairs of watchful eyes had noticed or, even worse, would say something. To my delight, nobody seemed to be paying attention. I frantically opened up Google Hangouts, and the familiar bolded white text greeted me, signaling that I had new notifications. I read through the conversation in the group chat consisting of my friend group back home at lightning speed.

Someone made a funny joke in class.

They might have a snow day tomorrow even though it was mid-March.

The school cafeteria had something other than pizza for once.

They’re making summer plans for once school ends. Oh, they already planned to hang out again this weekend at the mall.

I paused once I got to the end of the conversations, feeling as if I missed out on a whole day of fun. The pain of being left out was unbearable and I could do absolutely nothing to change my situation. Subconsciously, I bit my lip and then gave a silent prayer to the ceiling.

Then with nervous fingers, I typed into the group chat.

“Is anyone still awake?”

No reply. My heartbeat echoed in my ears and I held my breath.

Then, my friend’s profile picture of her cat lit up, and I saw the three dots that indicated she was typing. “Hey!”

“Hiiiiii!” I quickly sent back in excitement.

Another icon popped up.

My other friend was on too!

Other replies flooded the chat, and I sighed in relief. Today, I would be able to talk to them.

The heavy feeling of dread and anxiety that wrapped around my heart dissipated in that instant, and I felt like I could breathe again. I disconnected from the present and lost myself in the screen of my laptop, my fingertips reaching for the keys like a desperate man dying of thirst. The voices of my peers faded into the background. That lunch period, I had more fun than I had the entire two weeks I’d been in Australia. I felt at home and connected to my real friends—the people I could relate to, and the people who understood me.

When the next day rolled around, I wasn’t able to hold in my excitement while waiting for lunchtime. The thought of my being able to talk normally to my friends and feel comfortable in an uncomfortable environment crowded my mind all day. I booted up my laptop and immediately joined the conversation happening during lunch. But then, I was rudely interrupted.

“Allie? Do you wanna stop by Lord of the Fries with us after school?” my friend questioned.

Being surrounded by strangers and awkward conversations with girls that I barely knew made me feel sick. I shook my head.

My friend nodded with understanding but one of the other girls piped up. “What are you doing on your laptop all the time?” She leaned forward, trying to take a look at my screen.

I pulled back instinctively and my cheeks heated up. “I-I’m trying to get my homework done so I don’t have to do it later.” I lied. By now, all six pairs of eyes were trained on me. I could feel my palms begin to sweat and I returned my gaze down to my keyboard.

One of them said, “Oh, OK,” and the rest of the group went back to their conversation. It felt as if I had built up a tall brick wall between myself and them. At the same time, I was clinging desperately onto a delicate strand of spider silk that connected me to my friends back home.

But the strand only became thinner and thinner as time passed. I wasn’t able to relate to the everything my friends described in their conversations because the events had happened in a country miles apart from me.

It was hard to sit down at lunch to see:

I paused before asking my friends about who they were only to receive a reply of:

Names began to blur. Friendships changed. And I wasn’t able to stay in the loop. Social lives changed; social media changed. People obsessed over Snapchat and the ability to send snippets of their life in the form of a photo, or Instagram, where everyone’s posts were purely centered around having fun. Things weren’t consistent anymore.

All of a sudden, I felt that even if I went back, I would not belong. In that moment of epiphany, I realized that my experience here in Australia was going to be what I made of it. So, I started by learning their culture and asking my peers about concepts that were unique or confusing to me.

To my surprise, they all eagerly answered my questions and wished to learn about the differences between American and Australian culture. Slowly but surely, I built up my vocabulary and knowledge, only to realize that the differences were minimal. Sometimes it was hard to remember to drive down the other side of the road or that the sighting of a spider the size of a tennis ball is normal, but things were generally the same. We all wore flip-flops, except they called them “thongs.” Breakfast was shortened to “brekky” and McDonalds was just “Maccas.” But interestingly enough, the people were the same no matter where I went: friendly, open, and accepting.

I was surprised how much I was enjoying my time there. Not once did the thought of contacting my friends in the United States cross my mind for an entire day. Then, I realized that I never properly gave a chance to my friends here. I was too absorbed in finding comfort in the old life that I had without understanding that with time and open-mindedness, it was possible to feel like I belonged. I thought back to all the times I turned them down at lunch, or all the times I was too scared to talk about what I did for fun in the United States, because I thought they weren’t able to relate to the experience. It wasn’t them but me who had built up all these preconceived notions of who they already were without even trying to know them better. I was too obsessed with keeping in touch with my old friends and holding onto these relationships to realize that sometimes, one should let go.

One day, I sat down at lunch with my laptop tucked away in my backpack.

“No homework today?” My friend nudged me with a joking grin on her face, as if she knew all too well.

“Not today.” I smiled back.

Qinxiao (Allie) Wu is a Neuroscience and Behavior major from Golden, Colorado. After graduation, she plans to attend medical school and become an advocate for mental health by specializing in psychiatry. This narrative illustrates a stressful transition into a new environment, similar to now: freshman year of college. However, she ultimately encourages readers to keep their minds open, and to embrace the moment. She thanks her Writing and Rhetoric professor, Dr. Nathaniel Myers, for being a strong advocate and pillar of support for her throughout the writing process and the whole semester.