The Endurance of Love 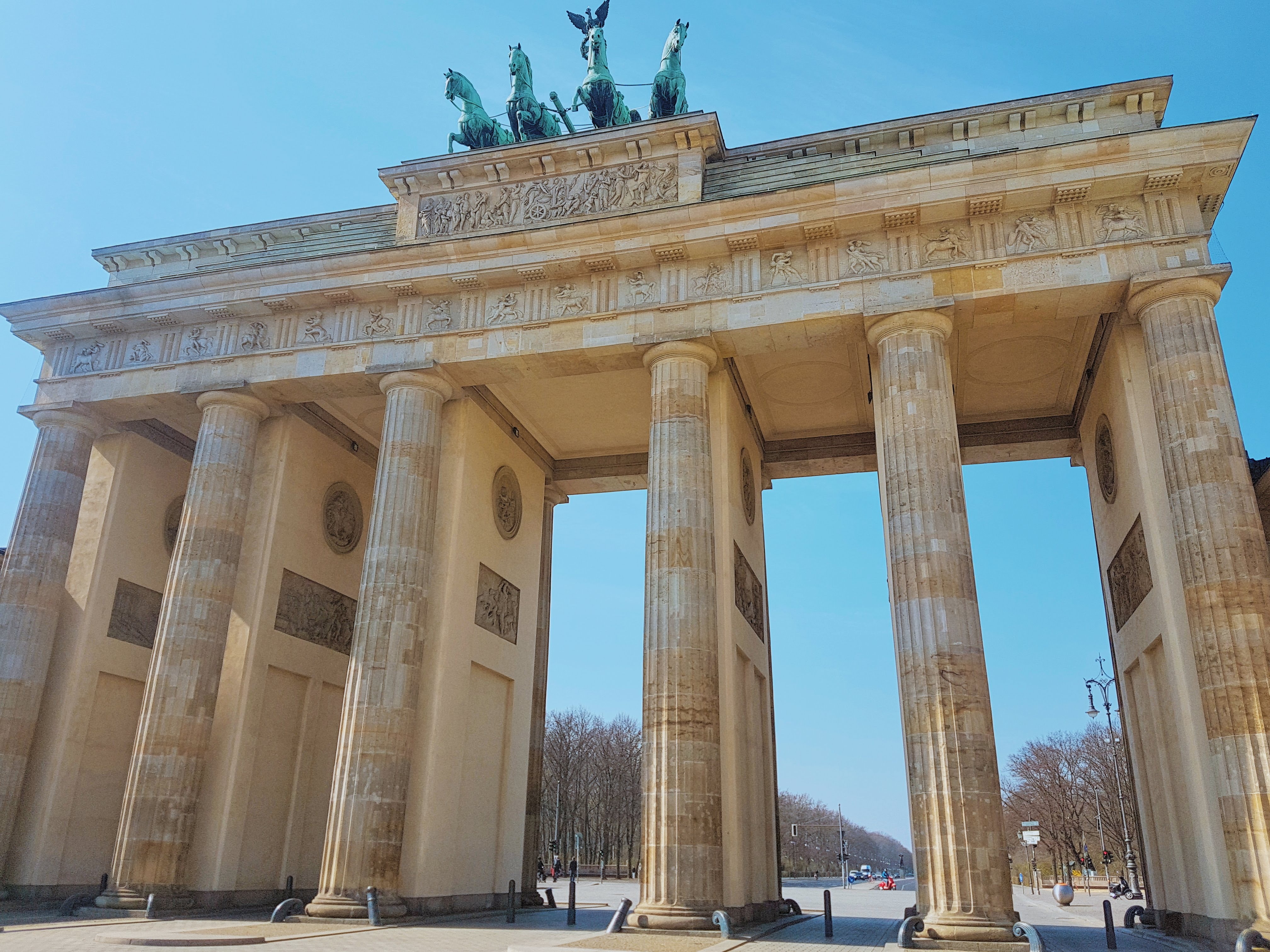 Photo by Reiseuhu on Unsplash

On June 12th, 1987, President Ronald Reagan stood before the people of West Berlin, with his back to the great wall that divided the city, and delivered the speech referred to as his “Remarks at the Brandenburg Gate.” Speaking nearly thirty years after the erection of the wall—but just two before it would finally be opened—Reagan addressed not only a divided city, but a divided world. Given that the speech was delivered at the beginning of the end of the Soviet Union, one might say it embodies the spirit of that downfall. A rhetorical analysis of Reagan’s famous address will do much to augment an understanding of the political and social climate at this turning point in world history. This paper attempts to begin this process, focusing on the rhetorical “how” of the speech and leaving aside as much as possible the more historically complex and contentious “why.”

The core message of the speech is an appeal that is essentially an emotionally charged dream of a future in which the human spirit is given the freedom to express itself. This pathetic appeal, besides being expressed directly, is also used to fuel the speech’s ethical and logical appeals. The central message of the speech is not addressed explicitly until the final few paragraphs of the transcript. In accordance with this pattern of building up to a rhetorical climax, I will analyze separately the intertwined arguments that make up the initial phase of the speech, seeking to determine not only the ethos and logos of those arguments, but how they prefigure the pathetic message at the speech’s core.

Early in the speech, President Reagan builds ethos both for himself as Berlin’s personal friend and for the American nation as a staunch ally that seeks universal freedom rather than power or revenge. He commences by confiding with the audience that he, and several presidents before him, have been “drawn [to Berlin] by other things [besides our duty]…by the feeling of history in this city…by the beauty of the Grunewald and the Tiergarten…[and] most of all, by your courage and determination” (paragraph 2). He goes on to quote a famous phrase, in poor but seemingly heartfelt German, by a well-known Berlin composer. He speaks short German phrases in paragraphs 3 and 11 as well; one can interpret these as attempts to accentuate the early part of the speech with comic relief and friendly assurance, relaxing his audience and making him a more sympathetic figure. Following this brief but potent ethical introduction, Reagan transitions to persuading his audience that the American nation loves Berlin as much as he.

President Reagan centers his ethical argument for America’s goodwill on the philosophy and practice of the Marshall Plan, through which America gave billions of dollars in economic assistance to help rebuild Western European economies after the war. “In this season of spring in 1945,” he says, “the people of Berlin emerged from air raid shelters to find devastation. Thousands of miles away, the people of the United States reached out to help” (paragraph 7). He goes on to repeat what Secretary of State George Marshall said at the commencement of the plan he devised: “[The United States’] policy is directed not against any country or doctrine, but against hunger, poverty, desperation, and chaos” (paragraph 7). With these noble-sounding words Reagan broadens the ethical argument for America: he now claims that not only is it friendly to Berlin, but it is selfless in its pursuit of worldwide justice and peace.

These are the main appeals to ethos that Reagan makes in the speech. When one takes the analysis deeper, however, one finds that these same appeals are built on pathetic imagery and language. For instance, Reagan’s ethical claim that he is trustworthy because he shares the audience’s love of Berlin is founded on a sense of “Berlin nostalgia” that he develops by talking about its history and beauty, as referenced above, with pathetic reverence. Similarly, Reagan fills out the argument for America’s ethos with appeals calculated to stir the listener’s emotions. He characterizes the regenerative power of the Marshall Plan with a particularly emotive image from his own memory: “I was struck by a sign [I saw] on a burnt-out, gutted structure that was being rebuilt…the sign read simply, ‘the Marshall Plan is helping here to strengthen the free world’” (paragraph 8). With this implication that anything can be renewed and reborn with care and perseverance, Reagan seeks to inculcate feelings of hopefulness and positivity in his audience toward their own situation and toward him. The president asks his listeners to trust him and his country but relies on pathos to provide the reasons they should.

There are basically two logical arguments in the “Remarks.” The first is the argument for the freedom of the West against what Reagan conceptualizes as political, economic, and personal oppression in the Soviet Union. The form of the argument is simple: Reagan calls the audience’s attention to the evidence that freedom gives birth to prosperity and oppression destroys it. He frames the evidence of “political and economic rebirth” by referencing the growth of Japan, Italy, France, Belgium, and the rest of Western Europe in the years since the war (paragraph 9) but focuses on the growth of West Germany and Berlin. When “the German leaders reduced tariffs, expanded free trade, [and] lowered taxes,” Reagan points out, “from 1950 to 1960 alone, the standard of living in West Germany and Berlin doubled” (paragraph 9). On the other hand, “in the Communist world we see failure, technological backwardness, [and] declining standards of health…Even today, the Soviet Union still cannot feed itself” (paragraph 12). His conclusion is simple: “Freedom leads to prosperity” (paragraph 12). This framing of the discordance between East and West as a simple matter of freedom versus oppression gives Reagan the emotional basis to make this logical argument powerful.

Reagan’s next logical claim is that America is wholeheartedly seeking disarmament. In its support, Reagan begins with how the Western alliance, led by the U.S., has pressured the Soviet Union into negotiating disarmament tactics (paragraph 18). Next, he describes how NATO, also led by the U.S., is in the process of trying to eliminate an entire class of nuclear weapons (paragraph 19). He finishes with the Strategic Defense Initiative in the U.S., explaining that his government “is pursuing…research to base deterrence not on the threat of offensive retaliation, but on defenses that truly defend; on systems, in short, that will not target populations, but shield them” (paragraph 20). Besides implicitly bolstering the ethical claims of Reagan’s and the U.S.’s goodwill, these bits of evidence reinforce the logos in this section of the speech.

As with the ethical arguments, the appeals to logos are built around, or towards, fundamentally pathetic themes and ideals. Though he does provide hard evidence when describing West Germany’s growth under freedom, Reagan consistently relies more heavily on the emotions that characterize the growth than the factual evidence of it occurring. He makes its journey “from devastation, from utter ruin” to prosperity (paragraphs 9,10,11) more of an emotionally redemptive story than a series of statistics or numbers that prove his claim. With the American struggle for disarmament, too, Reagan uses the evidence at his disposal not just to convince his audience that America wants peace, but to inspire them with hope for a time when the East-West divide will be literally and figuratively destroyed. President Reagan reminds his audience that “East and West do not mistrust each other because we are armed; we are armed because we mistrust each other” (paragraph 21). He advocates for a conception of the relationship between East and West as essentially one of shared humanity, implicitly indicating a path for rebuilding trust. While both are logical arguments, their aim is pathetic.

Before the core appeal to pathos is revealed in paragraphs 31 and 32, the careful listener (or reader) has already seen numerous examples of pathos working at a deeper rhetorical level. One can even notice a common pathetic theme running through this first stage of the speech: that of “unification.” On one level, President Reagan unites himself with Berlin by sharing his audience’s love for the city. On another, Reagan unites America to Berlin’s cause by harkening to the Marshall Plan. Reagan even unites the division and oppression of Berlin with injustice all around the world, the injustice felt by every human being: “Every man is a Berliner, forced to look upon a scar” (paragraph 5). He stresses the unification of Western forces through the European Community, NATO, and the “Western alliance” that is pushing through disarmament (paragraph 17). And though Reagan certainly acknowledges the sharp East-West divide, he focuses instead on the assertion that one day soon “We in the West [might] break down barriers that separate people” (paragraph 23) to create a world that will find peace through unity.

The half-hidden pathetic theme of unification finds a full voice near the end of the speech. As his address winds to a close, Reagan once again speaks to his Berlin audience directly, wondering aloud, “What keeps you here?” and proposing, “something that speaks with a powerful voice of affirmation, that says ‘yes’ to this city, yes to the future, yes to freedom. In a word…what keeps you in Berlin is ‘love’” (paragraph 31). President Reagan has already pointed out that “surely there is no better place than Berlin, the meeting place of East and West, to make a start [in achieving reconciliation]” (paragraph 23). Now, with his pathetically climactic assertion that Berlin is founded on love, he has created a striking image. He seems to say: Berlin stands between East and West, a symbol of strength despite division, just as love stands between two sides of any conflict, strong enough to weather the storms of hate and emerge victorious in the long run. With love, and only with love, is there hope for the ultimate unification of mankind: the unification that drives the appeals of the speech from beginning to end.

One may well wonder why Reagan and his speechwriting team chose this particular appeal to make a big impact in the political and popular climate of the time (a goal they largely achieved). While the full answer lies outside the scope of this paper, I propose that the effectiveness of this speech stems from its emphasis on the power of the human spirit to love, or as Reagan put it, “the human impulse to create, to enjoy, [and] to worship” (paragraph 32), in the face of a time when people were starved of such things. It was a time of globalization, of technological revolutions; a time during which the political world was dominated by two faceless, bureaucratic behemoths whose disagreements had resulted in terrifying weapons that could wipe humanity from the face of the earth. Perhaps people were desperate for a glimpse of a future in which such weapons were no longer necessary; a future in which the human spirit was given full reign to love, create, enjoy, and worship. Perhaps the “Remarks at the Brandenburg Gate” offered, and continues to offer, that glimpse.