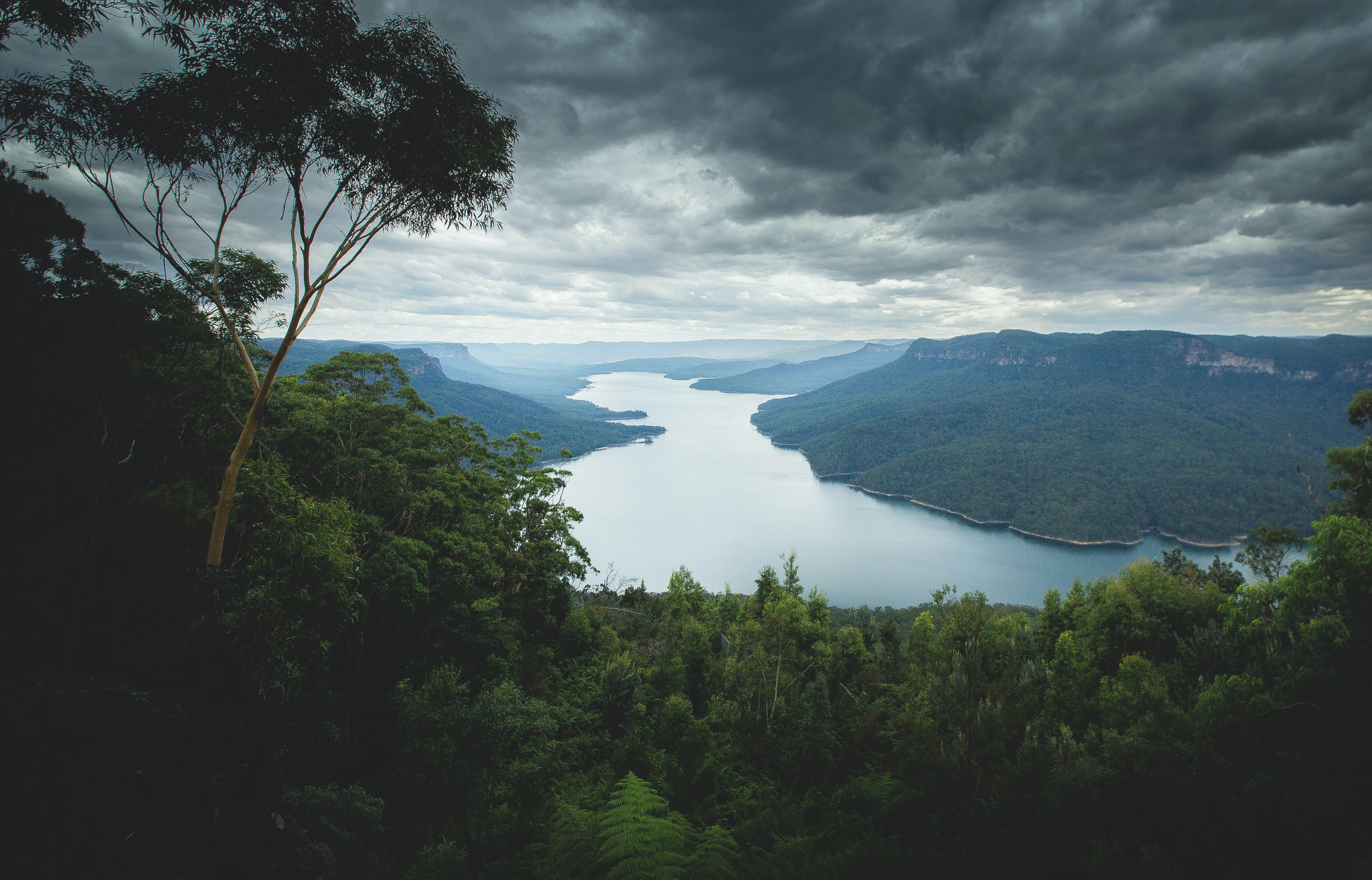 Photo by Fezbot2000 on Unsplash

"How much longer till White Rock, Spence?" Charlie groaned.

"Not much longer," Spencer replied. "A mile maybe? We're definitely more than halfway."

Through the spotty shade cover of the tall trees above us, the sun shone brightly directly overhead. I adjusted the straps on my day pack. "Do you guys want your sandwiches soon?"

"Nah, we can eat there," Spencer said. I shook my head, wiped my sweaty brow, and we plodded on. The frigid river water was a nice relief from the scorching summer heat, and that was exactly our intention. We had just begun summer break, and that was always the hottest time of year in Carmel Valley. The plan was to spend the rest of the day at Spencer's family property deep in the Valley, and the best way to get to White Rock from the middle school was to hike in through the river, which ran right by Spencer's house. Roads were too windy and dangerous for pedestrians, anyways.

About fifteen minutes after this exchange, a big slate dam came into view. We hopped out of the river that the dam fed, and we began to scale the rock wall that led to White Rock.

Spencer had described it as a small private lake, but describing as only that didn't quite do White Rock justice. White Rock was a man-made pond that was a beautiful shade of deep blue with wildlife teeming at every edge. Tall stalks of greenery grew in the banks of the lake, and small fish swirled in small congregations around some of the more shallow spots that small bugs frequented the surface of. Turtles were often found on the northern shore's rocks, occasionally hopping off into White Rock with audible but faint splashes. A couple of plastic rafts sat tethered in the center of the lake, bobbing gently with the lazily shifting surface. A small crowd of geese gathered around the base of one of the surrounding cliffs, although a sizable amount of them were perched in small pockets of the rock wall.

After we each pulled ourselves over the edge of the dam, I unpacked the sandwiches and drinks we bought from Safeway and we all sat down on a nearby wet and gross bench. The wood groaned and flexed, but it didn't break. The middle came a little too low under Charlie's weight, so he dragged up a rock to serve as a support.

"Y'ever think about the wildlife that lives here, Spence?" Charlie asked through a mouthful of bread and warm lunch meat.

"Well, the lake isn't full all of the time, right?"

"No, it isn't. It closes for the winter and reopens in the spring."

"Where do the things that live in the lake go when it gets drained?"

Spencer leaned back on the moist bench. "Well, the people who run the community typically relocate the fish, but I've never thought about the others. The geese… they fly away, I guess. The bugs die, but they also come back pretty easily. I have no idea about the turtles, though. Wouldn't surprise me if they get relocated with the fish."

"That doesn't make any sense," I exclaimed. "That's so inefficient. There's no way they do that, dude."

I noticed a couple geese began to come closer to the bench from their rock face. They noticed our talking, and they were seemingly curious. "Hey, look. There's some geese coming from over there."

Spencer immediately shot up from his seat. "The geese here are mean, guys. They attacked me when I was little."

I turned to them and frowned. "They are geese, guys. What are they gonna do? Honk?"

"No, no, no, Jack," Charlie cautioned as he backed away too. "They will tackle you and bite you. They have fuckin' teeth on their tongue. Geese are demon-spawn."

I decided to err on the side of caution, and I stepped away from the musty bench. The geese came closer, and eventually they stood where we used to sit.

"Man, this is stupid," Spencer lamented, rolling his eyes. "I'm gonna scare them off with some rocks or something. We were here first." Spencer immediately picked up some stones and began to lob them at the geese. He purposefully missed every shot, but the rocks still came dangerously close to hitting the geese. The geese were a little disturbed by the rocks, but they weren't leaving our bench.

I couldn't believe that Spencer was actually throwing stones at these geese. "Spencer, what the fuck?"

"Fuck you, geese!" Spencer began to sidearm throw rocks with a decent amount of speed. The geese flailed their wings in annoyance, but they weren't leaving. Spencer started to chase them down, lobbing rocks as he did so. "Get out of here!"

After Spencer started to run them out, the geese began to take off and fly short distances. Spencer kept picking rocks up and launching them at the birds who hadn't left yet.

"Relax, Jack," Spencer said. "I'm not gonna hit any of them. I'm just scaring them away."

After a few more throws at the rock face where several geese were perched, only one goose remained within the vicinity of White Rock. It sat halfway up the rock wall where other geese used to sit, unmoving and ducking with every incoming rock that Spencer threw.

"Come on, Spence," Charlie began to protest. " Just leave that one alone."

"No! Geese are evil!" Spencer continued to throw rocks, only this time he was putting some anger into his throws. Some of the rocks fragmented and exploded against the hard orange rocks that made up the wall. Still, the goose remained.

"Spencer, stop it!" I tried to push him into the nearby water, but he was enthralled with a strange fixation that I had never seen on him. He managed to get one more throw in before I pushed him over. The others came close, but this rock in particular was aimed right above the goose. The goose accidentally stuck its head up, and it got hit in the head with Spencer's last stone. It fell limp right away, and I looked away.

"What the fuck is wrong with you, dude?" Charlie came and shook on Spencer's shoulders. "What have you done?"

Spencer seemed to be out of the trance that he had formerly been in, now sitting frozen in shock as he stared up at the still goose. "I… I didn't mean to, I swear…" A grim expression of realization covered his sheet-white face. "That might have been a nest, guys."

A wave of shock and silence fell over us, we who were but children.

After the situation began to set in my face grew red with rage. I tried to stop Spencer, but he chose to indulge his own little sick fantasy!

"Well, you have to go check, Spencer! You killed the goose!" I exclaimed. "We can save the eggs if they are still there! We can take them to your house and incubate them or something!"

Spencer immediately scaled the wall and looked into the crevice where the goose remained. "Oh, fuck. There's six of them, guys. Six eggs."

We sat still for what seemed like an eternity. "Well, two eggs per person," Charlie said.

I nodded slowly, and I climbed halfway up the rocks. "Hand me two, I'll hand them down to Charlie." Spencer nodded, and he handed me two spherical gray eggs that filled the palms of my hands. I handed them down to Charlie, and he wrapped them in his towel. We repeated this until we had three bundles with two eggs in them.

In a rapid hurry, we dashed down the river from which we came. After about an hour of worry and care, we made it to Spencer's house. His father was less than pleased to hear that Spencer had accidentally killed a goose, and that we were trying to save her eggs in order to make things right.

"Hatching these birds won't save them, boys," Spencer's dad cautioned. "How will you feed them? How long could you keep it up? Go take these eggs to the lemon tree out back, and something will come eat them. That way, some real good can come out of this instead of something to make you guys feel better about yourselves."

Reluctantly and slowly, we gathered the eggs and clambered over the brush that divided Spencer's yard from the wild and untamed backyard where the lemon tree grew. We grabbed piles of leaves and made a soft bed for the eggs around the thin trunk. In slow, somber silence, we circled around the eggs. Spencer cleared his throat.

Charlie shook his head. "We could have done more to stop you--"

"No, you couldn't have. Don't try to take some of the blame. This is on me." He turned away from the eggs, and headed back to his house. Charlie and I followed him as he climbed up a makeshift ladder onto his roof which overlooked the lemon tree.

We sat in silence as the sun fell behind the mountains that surrounded us. The orange glow of sunlight disappeared, and nothing was left but the deep gray of the trees and the quickly darkening sky. A breeze would pass through us every now and then, and we would shiver, each of us feeling colder than ever before.

Eventually, a soft rustling came from deeper in the forest. We were completely silent as we flattened against the roof. A few minutes passed, and soon enough a softly-auburn yet radiantly orange fox and two pups came to the lemon tree. The fully-grown fox sniffed the eggs. The pups mimicked this motion. The big fox decided that the eggs were good enough, and it took the entire egg into its mouth, careful not to crack the shell. The pups mouthed at two smaller eggs until they too had them in their mouths. The three foxes went off into the forest, presumably to enjoy their dinner.

Feeling a strange sense of atonement granted by the foxes, we climbed off the roof and headed inside with hearts heavy and heads full.

Jack Cordell, class of 2023, is a Political Science and Philosophy undergraduate student at the University of Notre Dame. His personal narrative details a pivotal moment where he realized that actions, intended or not, have consequences. He also describes his hometown area in rural California where nature, though picturesque, isn't always kind and forgiving. Specifically, Jack is from Carmel Valley, California, right on the central coast. Jack is very heavily inspired by Stephen King's novella The Body among many of King's other works. He hopes to take these valuable lessons of actions and consequences and apply them to moral philosophy and his intended study of law. Jack would like to thank Dr. Nathaniel Myers for his wonderful instruction and guidance. He would also like to thank Michael Palshaw and Peter Ellison--and, of course, Charlie and Spencer.