Not All Tea Kettles Have Water 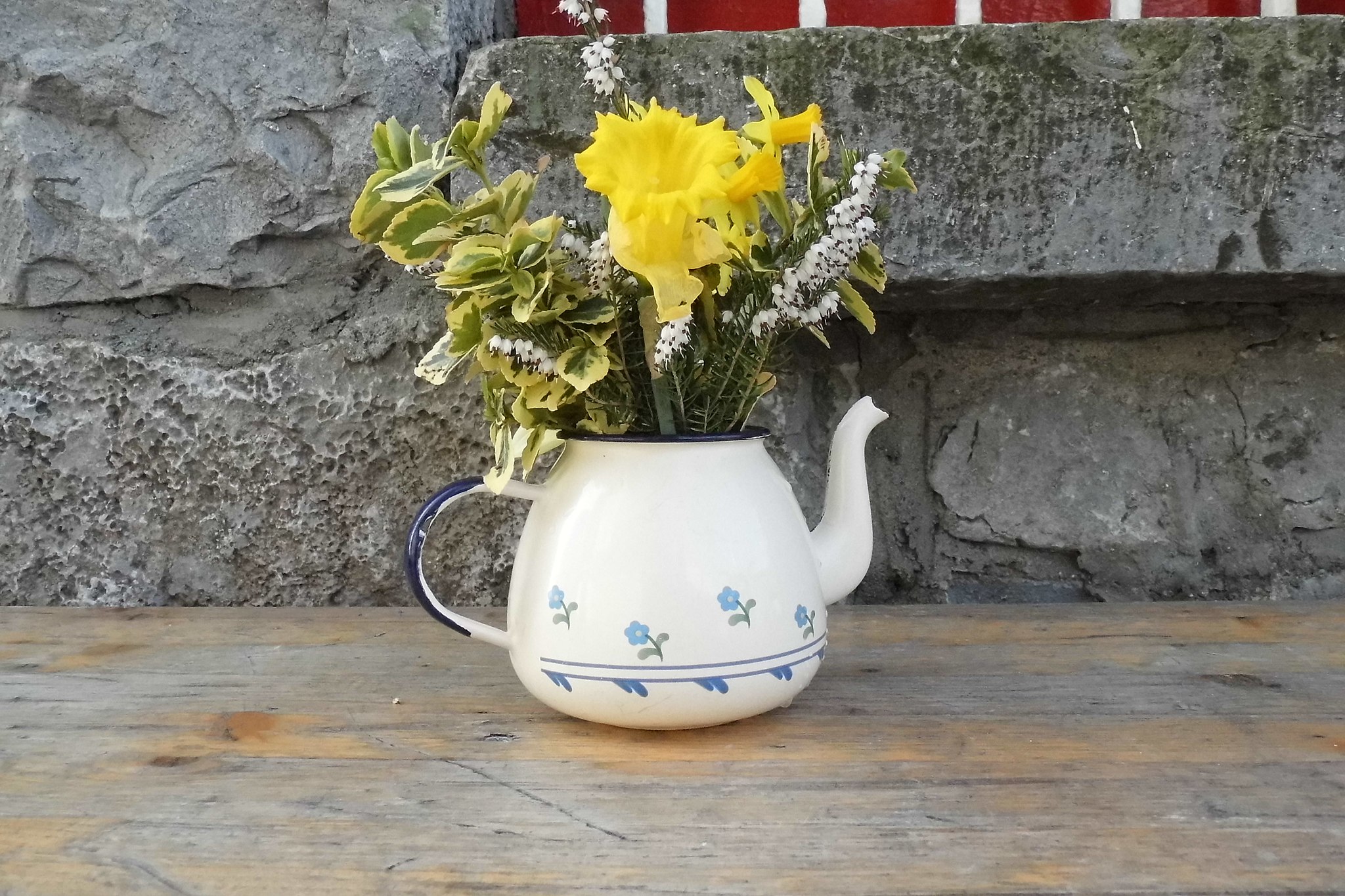 "What's wrong with the picture?" a kind yet demanding voice asked. My eyebrows began to furrow as my eyes narrowed in on the picture. My eyes scanned the image up and down as my fist began to clench in frustration at my inability to identify what was wrong with this picture. "Grace, what is wrong with the picture?" she asks again. I could sense her frustration from my lack of response in her tone of voice. My throat sank into my stomach, and my eyes fought to hold back the tears. I kept trying to glance at the clock, hoping to use time as a potential excuse to refrain from answering. My teeth began to dig into my bottom lip so hard that it made an indentation. It was then I came to the realization that during this IQ test, I had absolutely no idea what was wrong with the picture.

I still remember when I was told that I had a learning disability or, as some optimists like to call it, a "learning difference." But for me, the only difference it has made has been making school that much more difficult. I felt like a failure. My parents told me that it didn't have to define me, that as long as I put in the time and effort, I should be fine. So, I persisted and continued to put in the time—turning two hours of homework into four—and getting looks of resentment when I got to keep my test when the other students' tests were collected for grading. It was difficult to deal with the resentment from others throughout school, but I never questioned that I belonged. But then I came to Notre Dame, and soon began to feel like I didn't fit in here.

"You came to Notre Dame to be challenged" the professor's voice roars and bounces off the walls of the lecture hall. Hundreds of students in unison take out their freshly bought notebooks and pens, signaling their acceptance of this trial. I slink to my seat in an effort to mask the fact that I didn't realize we needed school supplies on the first day of class. A rush of heat flushes my cheeks—even though I can't see it, I can still feel the redness. I stutter and can barely make out the words to ask a peer, who is already so invested in his own note-taking, to borrow a pen. My fingers—shaking—flutter through the pages of my planner as I desperately try to find a page with enough empty space to take notes.

"Questions!?" the professor bellows after flipping through more lecture slides. The word rings in my ears. Questions, questions, questions. Eager to make a good first impression I want to ask a question, but I have so many questions that I don't know where to begin. How was I already lost in the material? Question after question was asked and question after question was answered. My mind was racing and soon the voices of my peers and the professor were just background noise to the thoughts in my head. Instead of thinking of questions about the material, my mind went to different questions. How did I get in here? Do I deserve to be here? Am I smart enough? What I didn't realize then but appreciate now, was that this class was a place of growth for me. Sometimes it is the experiences that challenge us the most that afford us the most growth. While it was a scary and intimidating classroom environment, I proved to myself that I could get through it and perhaps more importantly succeed. However, I also find myself wondering about those students whose brain differences or educational backgrounds made it harder for them to achieve their goals.

There is an assumption that exists at elite universities that everyone was a proverbial big fish in a little pond at their respective high schools. We were all number one in our classes, valedictorians, team captains, or class presidents. While we all did something exceptional that made us admissible to Notre Dame, the assumption that the grades, the test scores, the extracurricular activities—the clubs, the service-learning trips, and the sports—came naturally to or easily for all of us is simply wrong. Many sacrifices were made throughout our lives to get us here. Some of these sacrifices are as small as sleepless nights, while others are more significant—for example, a missed opportunity to form a meaningful relationship in an effort to prioritize our studies or our performance in a tournament. Moreover, for some of us, achievement or success is even harder won because learning doesn't just come from the amount of work we invest. For some of us, our brains physically don't allow us to learn, at least not as efficiently as other people.

Every year, Notre Dame ostensibly aims to encourage students by saying a fraction of the previous class would not be accepted into the incoming class since the new class is even higher achieving than the previous class. Erin Blasko, the Assistant Director of Media Relations at Notre Dame wrote an article dedicated to extolling the Class of 2022's achievements. However, stories like this one can serve to make some of us feel like we don't belong here. What Notre Dame ought to focus on, is that there are many ways to be an exceptional university that do not have to do with the grades, test scores, and the extracurricular activities of the students admitted. Why can't Notre Dame pride itself on becoming more diverse in all aspects: faith, socio-economic status, race, nationality, and even neurodiversity? Notre Dame certainly has room to improve in economic diversity given that students whose families hail from the top 1% by household income make up 15% of the student population ("Economic Diversity and Student Outcomes at Notre Dame"). What this means is that economic privilege is the norm and those without it struggle to find their place and to fit in at a university like Notre Dame.

Upon being surrounded by students who hail from at least the top 5% of their class in terms of test scores, GPA, and AP credits, it is easy to feel like a speck of plankton at the bottom of the Pacific Ocean. Thoughts that you are undeserving or unworthy become normalized. However, these feelings of unworthiness are ultimately self-defeating. Krista Gray, a contributing writer for Business Insider, describes how imposter syndrome, as much as people like to pretend that it doesn't exist, is commonplace, with 70% of people reporting to have felt like an imposter or a fraud at some point in life. At an elite university, the feeling of being an imposter is not made easier by the constant reminder of the inevitable fact that you may not do well academically—or at least not as well—as you have done previously. And when struggling to do well in school was a problem a student already had, it is unsettling to hear that even those who have a gift for test-taking may ultimately fail.

I eventually was told that the picture that was part of the IQ test I took depicted a tea kettle in the pouring position with no water coming out of it. However, I did not independently process what was wrong with the picture. My processing ability is in the 4th percentile, which means that 96% of the population has the ability to process information faster than I do. Why? I do not know. Nonetheless, this is a trait that has indelibly marked my school experience. Learning disabilities can diminish a student's self-esteem and felt sense of belonging in the classroom ("New to LD"). However, because having a disability is so stigmatized we rarely know when a person is struggling with one. It has become a truism to argue that stigmatizing or shaming people for learning in diverse ways is unacceptable, but it still bears repeating. In fact, I would say that having a processing disability has taught me more than any standardized test ever did. I have learned how to persist and work hard, even if it means I have to work harder than everyone else in the room. But perhaps most importantly, what I have come to realize is that I was right to think that there is nothing wrong with the picture, just like there is nothing wrong with me. In the diverse tapestry that is any great university, there are many ways to be smart. Social stigma and self-doubt have diminished our ability to see our struggles as our gifts or our disabilities as our strengths. Social stigma has also inhibited our ability to see the possible flaws of a picture-perfect situation, just as some professors seemingly can't comprehend why reminding freshmen that we are likely to fail at Notre Dame doesn't buoy our sense of ourselves as potentially thriving in a new learning environment.

I did come to Notre Dame to be challenged. I believe we all did. But part of that also means challenging our assumptions. There is no one way of looking at the world. At great universities, we should be taught to see issues from multiple perspectives and pictures from multiple angles. And perhaps that starts with an understanding that sometimes there is no water in the tea kettle.

Grace Franco is a rising sophomore from Brooklyn, New York. The transition to college is never easy, and during her first semester at Notre Dame, she experienced feelings of impostor syndrome that were not made easier by her struggles with her learning disability. Channeling this struggle into writing, she composed "Not All Tea Kettles Have Water" where she argues that people with learning disabilities should be respected for the perspectives they bring, as opposed to stigmatized, intimidated, or shamed. Franco asks readers to reflect on how everyone at Notre Dame can better support a range of students to discover their strengths as learners by respecting a diversity of aptitudes, perspectives, and backgrounds. She would like to thank Professor Shumake for her constant support and her encouragement throughout the writing process as well as her Writing and Rhetoric class for offering a safe and comfortable atmosphere in which she could raise these concerns.