In Regards to Rhetoric, Gun Violence Can Be Both Aesthetic and Atrocious 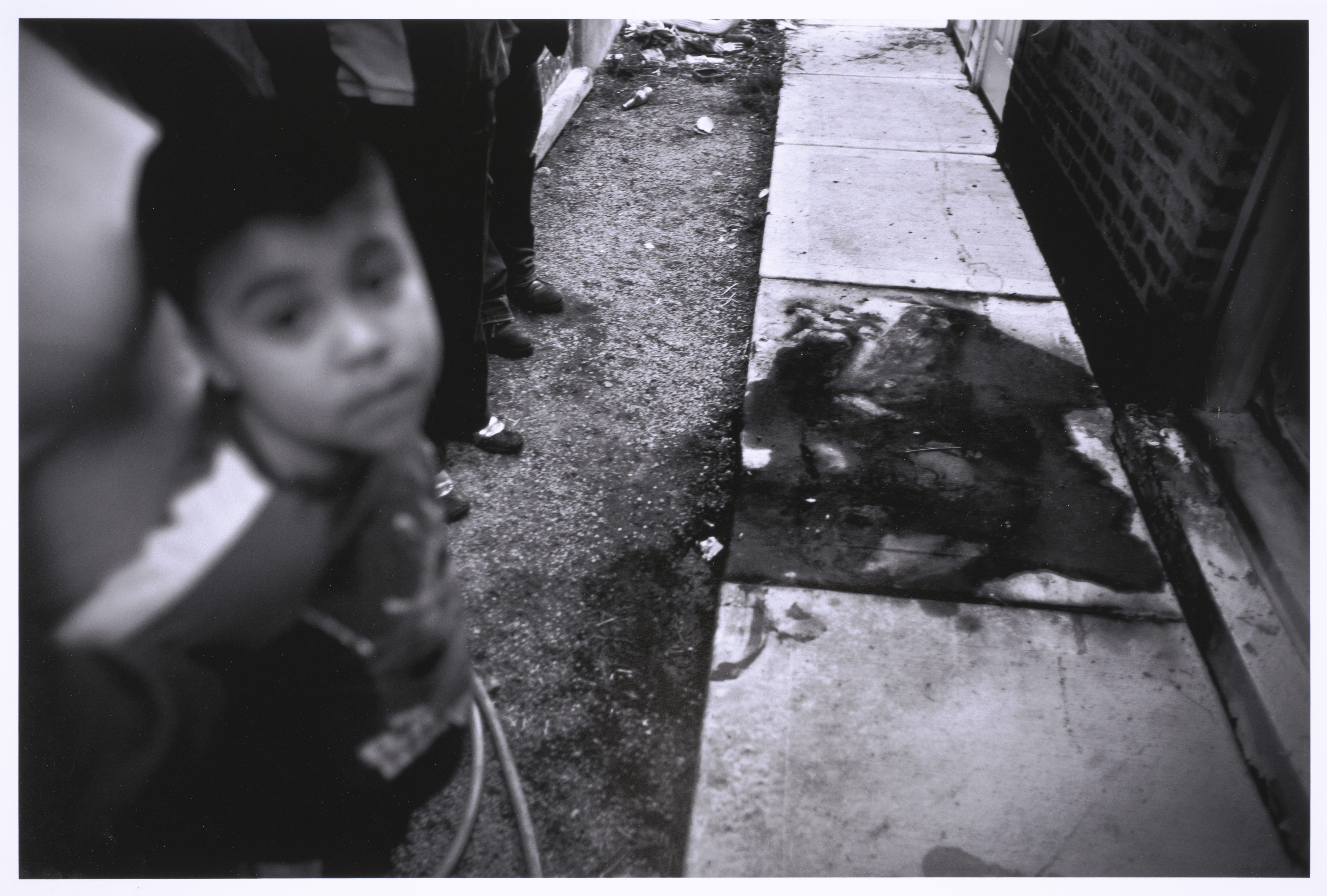 Carlos Javier Ortiz, Alex Arellano, 15, was shot and burned after being hit with bats and then

To the Director of the University Writing Program:

During a recent trip to the Snite Museum of Art, I encountered a photograph that I believe would serve as a substantial contribution to future first-year Writing and Rhetoric curriculum. The image is titled Alex Arellano, 15, was shot and burned after being hit with bats and then struck by a car that was chasing him. Gage Park, Chicago, 2009 (hereafter referred to merely as Alex Arellano). Alex Arellano is a piece in We All We Got, a collection of photographs on gun violence in Chicago compiled by Carlos Javier Ortiz. Ortiz captures powerful images that specifically focus on documenting social issues (Ortiz 180). I was fascinated by the way he presents this particular statement piece on gun violence with a combination of aesthetic and strategy; I couldn't get the image out of my head.

As a piece of visual rhetoric, the photograph has a lot of merit. It is ethical, utilizes symbolism, strongly appeals to its audience emotionally, and possesses real-world value with content that would be relevant to Notre Dame students. Because of its rhetorical elements, its value as a statement on the contemporary issue of gun violence, and its potential to assist with the mission of the University Writing Program,[1] I strongly believe that analysis of Alex Arellano should be added to first-year Writing and Rhetoric courses.

Ortiz's work with Alex Arellano and the rest of We All We Got demonstrates a truly ethical approach to visual rhetoric. According to the website for the University Writing Program, "Argument is an ethical activity." Consequently, the program strives to "teach students about the relationship of argument to ethics" in Writing and Rhetoric courses through the implementation of rhetorical virtues,[2] all of which Ortiz exemplifies. He showcases intellectual courage and judgment by capturing images that invite controversial discussion about gun violence because he deems it to be a subject that must be talked about. Yet, he also demonstrates tolerance with a portrayal that is clearly a statement on gun violence but which does not demand that its viewers respond a certain way. Lastly, Ortiz exhibits honesty, knowledge, and rationality with the thorough way he gathers his information. With all his work, "Ortiz collaborates with his subjects by asking them to share their personal narratives and testimonials" ("We All We Got"). He listens to people's stories, and from there he outlines the way he wants to portray their truths in the most authentic way possible. Therefore, Alex Arellano and its creator exemplify ethical approaches to rhetoric, which would be a critical aspect to explore in the context of a first-year Writing and Rhetoric class.

Ortiz's ability to emotionally connect with his audience with Alex Arellano elevates the image to a profound rhetorical level. Ortiz immediately establishes a somber mood through strategic angles and a greyscale depiction of a boy witnessing some bloody travesty. The perspective even places the viewer as an emotional witness to the scene where Alex's body had been discovered. When viewers notice the large pool of blood, they are left wondering what crime had been committed. They understand that someone has been severely injured or possibly even killed, but they do not know the circumstances surrounding the unknown encounter. Due to the deliberate evasiveness of the image and Ortiz's choice to place a blurry boy's expression near the forefront, the viewer's sympathy is called upon, and their curiosity and imagination are instinctively piqued. According to Sturken's and Cartwright's Practices of Looking, this emotional portrayal of a real event is what makes a photograph compelling, as they claim, "The power of the image derives not only from its status as photographic evidence but from its powerful evocation of the emotions of life's struggles" (19). Ortiz portrays a real event with Alex Arellano, but his presentation makes the emotion evoked by it even more potent.

A striking element of Alex Arellano is its ability to prompt images of gun violence and the emotions associated with it without ever depicting a gun. Rather than showcasing a gun or Alex Arellano's shot and burned body, Ortiz focuses on a large pool of blood—which could be representative of any bloody incident—and a boy whose face appears sorrowful yet unsurprised at the gory scene. There is the sense that the viewer, like the boy, should be familiar with the situation that occurred. The audience is reminded of gun violence, even if they aren't certain of the explicit intent of the photograph. Consequently, Ortiz is able to use symbolism as a rhetorical strategy to implicitly refer to gun violence, which makes Alex Arellano an excellent example of visual rhetoric. According to Sonja K. Foss in her chapter "Theory of Visual Rhetoric": "To qualify as visual rhetoric, an image must […] be symbolic, with that image only indirectly connected to its referent"(144). Ortiz achieves this aim masterfully with his ability to make a physical gun present in the minds of his audience while keeping it absent from the image itself.

Some students, parents, and faculty may object to the graphic content of Alex Arellano. Even though a gun is never explicitly shown, a large pool of blood is a central focus of the image. Additionally, standing at the forefront is a boy who represents youthful innocence and who the viewer instinctively wants to shield from the horrific scene behind him. Furthermore, the full title of the photograph presents a graphic image with the description of Alex Arellano's body being shot, burned, clubbed, and hit by a car. There is no denying that violence is infused in the photograph. However, gun violence is a reality of the world. In the United States, about 73 percent of all homicides are caused by a firearm, and there have been more than 110 mass shootings in the US since 1982 ("America's Gun Culture in Charts"). Hence, the content matter of Alex Arellano is extremely relevant. At the college level, students cannot be left ignorant of issues that may affect them at present or after graduation. Nevertheless, the event itself would not be the focus of class discussion; the rhetorical elements of the photograph would be. The content, of course, would have to be addressed while examining the aesthetic of the picture as well as the creator's intentions. However, the class analysis would be directed towards recognizing rhetorical strategies in the photographer's choices of perspective, coloration, and subject matter. Additionally, the fact that the visual can be disturbing to viewers actually contributes to the emotional appeal intended by Ortiz and further demonstrates his intellectual courage in presenting a controversial image. While Alex Arellano undeniably possesses mature content, it would be presented in a mature setting, and the value of the rhetorical analysis of the image outweighs potential misgivings about the photograph's content.

In summation, first-year students in a Writing and Rhetoric course could learn a lot about rhetoric through the study of Alex Arellano. If added to the curriculum, Alex Arellano could inspire in-depth discussions on the importance of ethical writing, the subtleties and diversity of symbolism, and the influential power of emotional appeal. The photograph also aligns with Notre Dame's Mission Statement, which asserts, "The University seeks to cultivate in its students […] a disciplined sensibility to the poverty, injustice, and oppression that burden the lives of so many" ("University"). Gun violence is a relevant issue that has taken countless innocent lives. Therefore, an in-class analysis of Alex Arellano would provide students with not only a lesson on visual rhetoric but also with an exposure to an injustice in their world. The rhetorical and lasting value of Alex Arellano is significant given all the reasons I have presented above. It is on the basis of these arguments that I urge you to consider adding Alex Arellano, 15, was shot and burned after being hit with bats and then struck by a car that was chasing him. Gage Park, Chicago, 2009 to the curriculum of first-year Writing and Rhetoric courses.

Sincerely,
Sydney Heller
A first-year student in a Writing and Rhetoric class

[1] The mission of the University Writing Program, according to the "What We Teach" page of their website, is "to teach argument […] because proficiency in argument will enable students to participate in broader civic and cultural conversations."

[2] The "rhetorical virtues," according to the University Writing Program's website, consist of honesty, knowledge, rationality, tolerance, judgment/wisdom, and intellectual courage ("What We Teach").

"We All We Got." Red Hook Editions, https://www.redhookeditions.com/portfolio/we-all-we-got/.

Sydney Heller is an Electrical Engineering major from East Moline, IL. She is the daughter of Susan and Christopher Heller and has one older sister and brother-in-law. Sydney has always loved the arts and stays involved in singing, dancing, and theatre on campus. She hopes to eventually combine her interests by applying her engineering education to the Arts and Entertainment industry. In her essay "In Regards to Rhetoric, Gun Violence Can Be Both Aesthetic and Atrocious," Sydney explores the elements of a powerful statement on gun violence that was crafted by photographer Carlos Javier Ortiz. She addresses her essay to the director of the University Writing Program, arguing why the photograph should be included in the curriculum of first-year Writing and Rhetoric courses. Sydney would like to thank her own Writing and Rhetoric instructor Dr. Erin McLaughlin for greatly improving her writing skills and for encouraging students to become personally invested in every topic they write about.