Harvesting the Path to Freedom 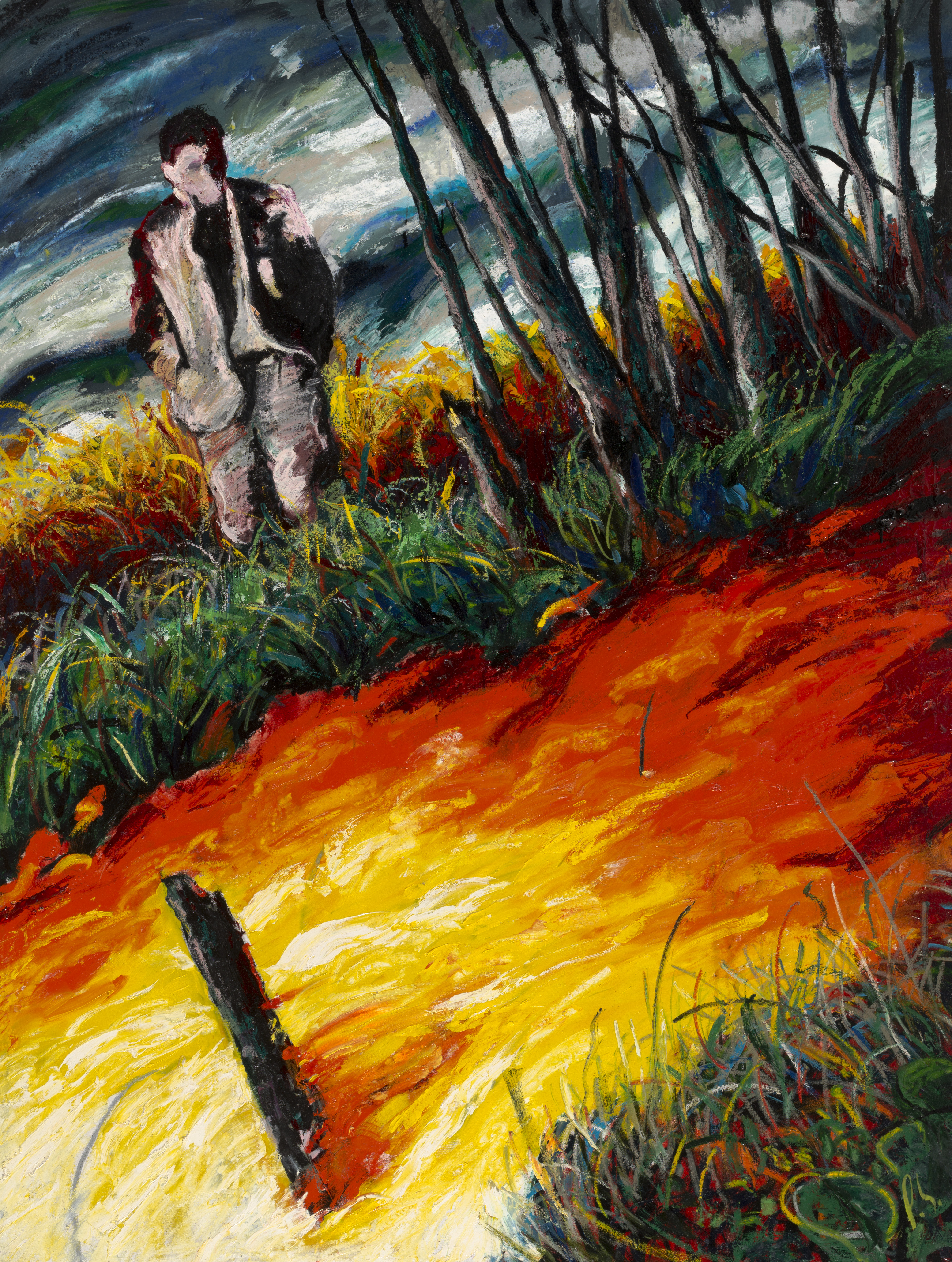 The colors of Paul Sierra's "Harvest" (1994) are undeniably loud as they intensely scream at me from across the walls in the contemporary art exhibition section. Like any other observer who witnesses this painting, the vivid crimson and deafening burnt orange strike me with a sense of complete awe. I have never seen a piece so striking also manage to be so large. It towers over me, seemingly looking down in the same manner I am peering at it. Is the man lost? If he is, why does he stroll with such a nonchalant step? His face says nothing. His hands are in his pockets, expressing indifference about the blazing fiery pit ahead. Is this burning mass replacing a stream? Rather than observing a reflection in water, the artist introduces water's polar opposite: a fire hellhole. The contrast of the situation even extends to the usage of hues; complementary colors sprinkle the canvas. The chaotic energy of the piece, yet calmness proved in the man's movements, equally emphasize this paradox. Overall, the inconsistency of the scene suggests a double meaning when it comes to Sierra's introduction of the term "harvest." Through his cultural interpretation on the canvas, Sierra is expressing that "harvesting" a new life beyond the divide of man's comfort—through immigration—is painful; however, it is a path that must be taken, nonetheless.

As my initial hoard of questions would suggest, uncovering this subtle message was extremely tasking. Buried in this painting's elaborate juxtapositions and waves of unbelievably defined colors, I remained huddled over my desk in the pale light of dusk simply observing the same lines again and again. I was waiting for the strokes to speak to me. However, I was not waiting for the hollers I had experienced before; rather, I was encouraging the piece to reveal anything. A whisper, a slight hush, a movement that captured Sierra's vision as it danced over me like the sparks had from his interpretation of oil on canvas. However, all that loomed ahead were the connotations of my own memories. I was not even certain what they meant. How did Sierra manage to accomplish this stirring within me? Much like the chaos of his painting, my thoughts turned to scattered puzzle pieces, scrambled eggs that could not be replaced to their original solidity.

It was not until after dedicating several hours to the study of Paul Sierra's previous works, his socializations, up-bringing, past experiences, and backgrounds that I was finally able to decipher what the recipe for each component of his painting denoted. After concluding my frantic search for meaning in the jumbled blaze of destruction, I learned that audiences of Sierra's landscapes and portraits around the globe have constructed a conspiracy concept regarding his artworks. Interestingly, the vague, shadowy figure incorporated within "Harvest" is believed to represent the same indistinguishable man that he often smudges into self-portraits. In other words, the man in the frame is Sierra himself.

After discovering this notion, I was thoroughly perplexed. Why would Sierra sketch his own, faceless body entering the vastness of such a harsh environment? Across a bridge of flames, to be exact? Why would he choose to endure such adversity, even if it was merely in a two-dimensional scenario? Then, in the same manner that Sierra's colors had overwhelmingly drowned my eyes, my thoughts were struck with the answer. The strife of achieving American "freedom" is often deemed as an emotionally painful process. Sierra represents this process as the equivalent of burning. Yet, this is the path that Sierra trekked upon, nevertheless. In brief, just as the shadowy figure creates a troublesome path on the canvas, this piece is directly reflecting Sierra's journey as a Cuban immigrant.

As any American can attest, immigration laws, opinions, and anecdotes have been subjects increasingly debated upon in recent years. The argument of land boundaries gains leverage in Sierra's piece as Victor M. Cassidy reveals in his analysis "Seven Latino Artists and the Narrative Tradition." Cassidy explains that Sierra came to America as a teenager after growing up surrounded by Havana's inspiring landscape (Cassidy). Sierra's contribution to the controversial immigration debate is proved through the embodiment of his own stature previewed in the painting: "This man—he resembles the artist—appears often in Sierra's work. Sometimes he wears a hat and overcoat..." (Cassidy). This explanation strikes yet another plaguing question. Why does Sierra choose to emulate the very personal idea of the "American dream" in his painting, yet make it impersonal by concealing his identity from the audience through a lack of facial detail (and even hats and coats in other pieces)?

Further dissection of "Harvest" proves that this faceless settler emphasizes an essential substitution factor. To elaborate, by leaving his own identity ambiguous, others are driven to relate to Sierra's subject and substitute the man with ideas of "self." In this way, the individual in the situation can easily be transformed into the onlooker; those who can resonate with the struggle picture themselves waltzing through the scene in Sierra's same steps. Just as Sierra states in a feature on Escape Into Life, "'Art is of great help to the immigrant, allowing him to transform the chaos of his life into a positive vision'" ("Artistic Statement"). This designation explains why I subconsciously attached my own memories to the sight of Sierra's shimmering hues. Except after gaining knowledge of Sierra's purpose, all I can do now is think of the true audience these raw shades speak to: immigrants.

Now, I am reminded of my best friend. My ears ring with the murmurs of her escape from her home country as my eyes bleed crimson with the clutter of Sierra's flames. She often expresses to me the detriments she experienced while immigrating to the United States. Her older sibling and mother refused to learn English, resulting in academic and societal failure, leaving her, the youngest, to take over as the family leader. To draw a similar parallel, often times, immigrants and refugees believe all aspects of life will improve on the other side of the border. Yet, the challenges posed in finding work and opportunity, battling discrimination, trying to raise an "acceptable," cookie-cutter, white-picket-fence family, overcoming language and cultural barriers—all can be visualized as the flames waiting on the other side.

These same fiery flecks of paint are the first ones that my best friend's eyes grazed as I asked her to analyze Sierra's argument. From her point of view, she noted the choppy, rapid brush strokes that compose the sea of sparks before anything else. The shape, direction, and length of the lines suggest violent movement. Similarly, not only is the scene portrayed as moving, but the audience's surrounding ambiance mimics this phenomenon as well. To create this affect, Sierra shatters the fourth-wall perspective and accomplishes a sense of frantic disorganization, all by tilting the orientation. In doing so, he is pushing all aspects of the painting into the audience's backyard. The perspective is not centered, but rather shifted to the left in order to simulate the onlooker's own path of walking towards the burning. Such an altered perspective is implemented in order to directly oppose the energy radiating from the bodily figure that represents young Sierra. Subsequently, that is what my friend had noticed next. The following component that her sight travelled to was the man ignoring the fuming disaster before him. Sierra's decision to leave "himself" without expression, portrays a person void of emotion. With a lack of emotion comes indifference and the aura of certainness. For, like my friend, regardless of what lies beyond, or any inner emotions, the man knows he must face calamity out of the need to move forward.

To emphasize, after incorporating my friend's point of view, and knowledge of Sierra's troublesome childhood, my perception of the artwork before me was completely altered. I once depicted nothingness in the lines of Paul Sierra's "Harvest" and traced the painting's purpose to one strictly fueled by aesthetic. Despite this, my ignorance is now overwhelmed with evidence of the layered, complex concept of immigration. This message introduces the societal and cultural argument that the flee to a better life does not always pose as the "greener grass on the other side." In order to represent this, Sierra combines the artistic methods of perspective, color, and plays with aspects of identity to formulate the paradox of serenity amongst calamity. It is as if he is asking the audience out of necessity, would you keep walking forward?

Hannah Harris is a rising sophomore at Notre Dame. She is from the suburbs outside of Chicago and has grown up encompassed by the artistic energies of her large family. Subsequently, this sense of creativity is incorporated in Harris’s writing, education, and is also why she chose to construct an essay investigating the rhetorical composition of Paul Sierra’s contemporary painting “Harvest.” Harris has an inquisitive outlook on humans’ perceptions of reality. The art of this dimension that we inhabit as empathetic beings is what has driven her to pursue a career as a Creative Director. If this becomes a reality, she intends on combining art and rhetoric to bring awareness to the intersectionality between all its forms and society’s interpretation of poverty. Harris thanks her family and Professor Kristen Carlson for being unfathomably understanding. Rather than forcing her to rush academics, they have encouraged her to tame her inner, creative voice independently.