A Glimpse into Gun Violence: Rhetorical Analysis of a Visual Text 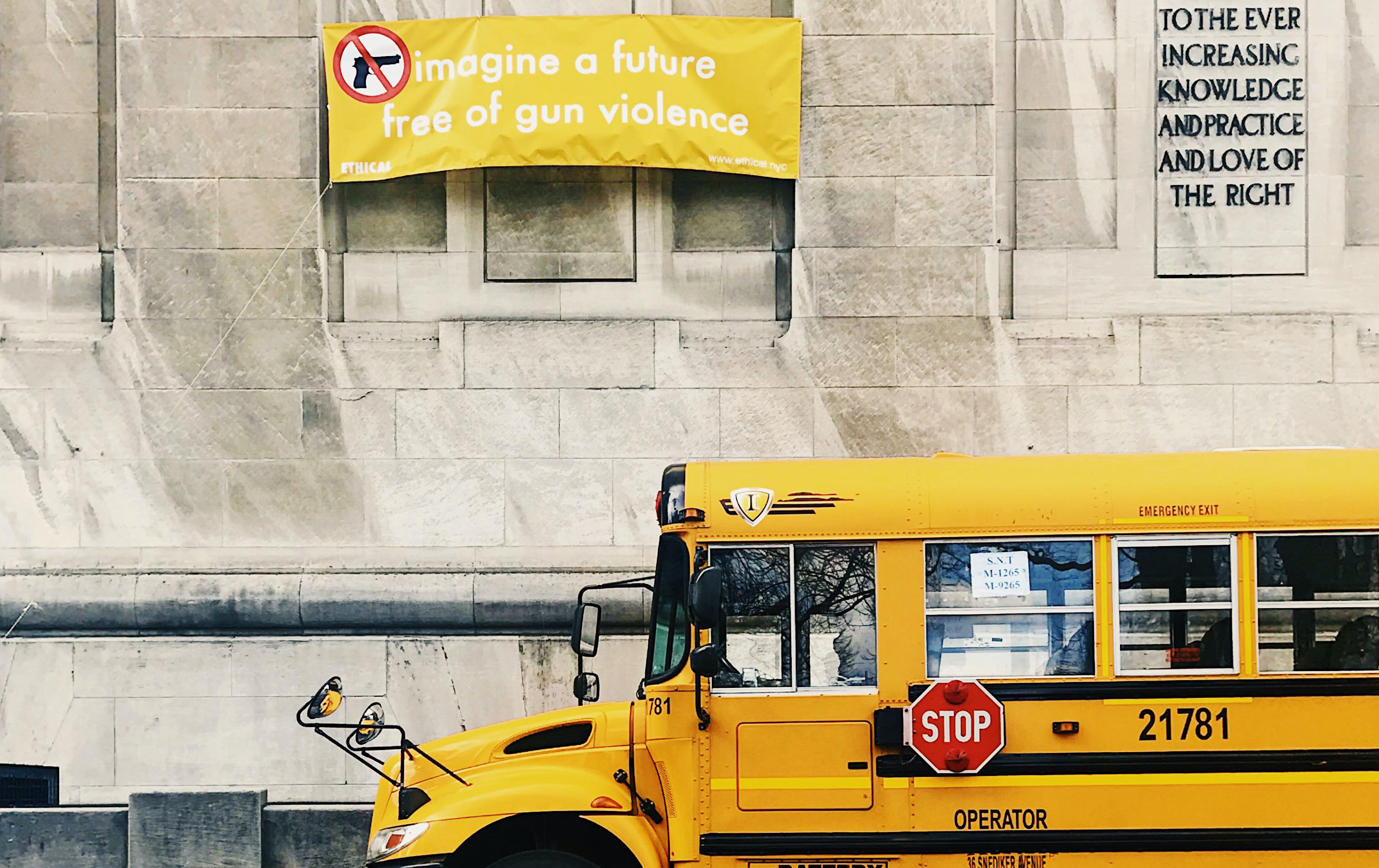 Photo by Jose Alonso on Unsplash

While the term "rhetoric" has largely been connected with solely textual argument and communication, modern rhetoricians have begun to understand that rhetoric is multi-faceted and is capable of appearing in a variety of mediums. Visual rhetoric, one of these alternate rhetorical mediums, is especially intriguing because, as Sonja K. Foss states in Handbook of Visual Communication: Theory, Methods, and Media, "visual images provide access to a range of human experience not always available through the study of discourse" (143). In the modern era of rhetoric, it is increasingly important that students are exposed to visual rhetoric because of its profound influence on its viewers and contemporary culture, which is unseen in other forms of rhetoric. This ability of visual rhetoric to impact contemporary culture is present in the work of Carlos Javier Ortiz, a Puerto Rican-American photographer whose work focuses on the downfalls of American culture such as gun violence, racism, and poverty (Ortiz). Specifically, Alex Arellano 15, Was Shot And Burned After Being Hit With Bats And Then Struck By A Car That Was Chasing Him, Gage Park, Chicago (hereafter referred to as Alex Arellano), a photograph from Ortiz's series We All We Got, serves as an excellent example of visual rhetoric by educating its audience on the devastating effects of gun violence in America. Furthermore, Alex Arellano is an ideal visual text for use in first-year Writing & Rhetoric courses at Notre Dame because the photograph evokes the power of symbolic elements, connects to a contemporary issue, is used by the creator to call for change, and conforms to the ethical and rhetorical values of the University Writing Program.

Carlos Javier Ortiz, "Alex Arellano, 15, was shot and burned after being hit with bats and then struck by a car that was chasing him, Gage Park, Chicago, 2009," digital pigment print. Scholz Family in honor of the 2016 PhotoFutures students, 2016.047.

One aspect of Alex Arellano that makes it an ideal example of visual rhetoric is how it evokes the power of symbolic elements throughout the photograph. Sonja K. Foss states that symbolism must be present for an image to be characterized as visual rhetoric (144) and she continues that "Visual rhetoric is the actual image rhetors generate when they use visual symbols for the purpose of communicating" (143). While Ortiz's picture is abundant with symbols, arguably the most prominent one is the blurred face of the little boy. By distorting the audience's view of the boy, Ortiz communicates how society's view of the victims of gun violence is improper. He sparks conversation amongst the audience regarding whether victims of gun violence are treated with the dignity they deserve from society or if they are simply viewed as another statistic of a nationwide crisis. The blurred face of the little boy serves another purpose for Ortiz as it is the only face visible in the image. Through her discussion of reframing in Western Journal of Communication, Judith Lancioni states that "Singling out an individual by reframing a group shot as a close-up invites viewers to speculate on the diverse ways of seeing and thinking about the subjects of these photographs (112)" and images can be "reframed to focus attention on one detail of the photograph" (107). By framing Alex Arellano in this way, Ortiz singles out the little boy as the subject of the photograph, focuses the audience's attention on the boy, and forces them to contemplate the effect gun violence has on our country's youth. Through the use of the blurred face of the little boy as a symbol speaking against gun violence, Alex Arellano presents itself as an ideal example of visual rhetoric.

Alex Arellano is also an intriguing form of visual rhetoric because of how the creator of the image calls for change in gun violence. This aspect of the image can be seen through the way Carlos Javier Ortiz chooses to frame the photo. In Practices of Looking: An Introduction to Visual Culture, Marita Sturken and Lisa Cartwright explain that "The creation of an image through a camera lens always involves some degree of subjective choice through selection, framing, and personalization" (16). In Alex Arellano, Ortiz frames the photo so that the young boy is looking up towards the camera and towards the audience, giving the appearance that the young boy is looking to the audience for help. By intentionally capturing the photograph in this way, Ortiz is clearly calling upon the audience for action to be taken to stop the widespread gun violence. Through the exploration of Thomas Gabor's Confronting Gun Violence in America, it becomes clear that Ortiz's call for action is well-grounded as Gabor states that the United States is the world leader in mass murders (3). Gabor continues to discuss how other prominent countries, such as Canada, UK, Australia, and Germany, have responded decisively to gun violence by implementing bans and regulations on guns while the United States actively expands the rights of gun owners (4-5). Through the use of selective framing, Ortiz calls for change relating to the pervasive problem of gun violence tormenting the United States and validates the photograph as an intriguing form of visual rhetoric for first-year Writing and Rhetoric courses.

The photograph's strong connection to the contemporary issue of gun violence is another component of Alex Arellano that makes it a useful example of visual rhetoric. Through the photograph, the audience is given a glimpse of the brutal violence happening in Chicago and around the country by showing the aftermath of a gun-related incident with the blood still visible on the ground. In recent years, Chicago has gained the attention of the nation due to its increase in violence, and, in Gun Violence in Chicago, James Garbarino states that there was a thirty-percent increase in murders in the first three months of 2017 in comparison to the first three months of 2016 (45). Garbarino continues to explain that certain neighborhoods in Chicago are currently trending toward returning to the "war zone" environment that was experienced in the 1990s (45). On a national level, "The USA is experiencing levels of gun violence that are dramatically higher than those of other affluent countries" (Gabor 3). Through his photographs and through Alex Arellano, Carlos Javier Ortiz brings the audience's attention to this nationwide crisis and reminds the audience that it is one of the greatest issues of this time. By including Alex Arellano in the first year Writing and Rhetoric courses, students not only learn about the various rhetorical techniques but also gain the opportunity to explore the contemporary issue of gun violence.

Alex Arellano additionally utilizes multiple ethical and rhetoric values that align with the values of the University of Notre Dame University Writing Program. Through reading the "What We Teach" statement from the University Writing Program, it becomes apparent that the program wishes to ensure that Writing and Rhetoric courses examine the ethical and rhetorical aspects of arguments. Alex Arellano confines to the goals of the program by serving as an excellent example of the ethical values of honesty and intellectual courage as well an example of the rhetorical value of pathos. Honesty is displayed in the image because it captures the murder scene as it was following the incident rather than being altered by adding or removing elements of the environment it occurred in. The image demonstrates intellectual courage because it depicts the true and disturbing nature of gun violence and by doing so, possibly causes viewers to become disinterested in the image or Carlos Javier Ortiz's work as a whole. The image also exhibits the rhetorical value of pathos by drawing attention to the little boy's face and therefore causing the audience to consider how gun violence is destroying the innocence of thousands of children across the country. As a visual text used in first-year Writing and Rhetoric courses, Alex Arellano will serve as an example to students as to how the values of the University Writing Program are present in visual rhetoric.

Despite the provided evidence for why Alex Arellano is an ideal visual text for use in first-year Writing & Rhetoric courses, some students may argue that other forms of rhetoric would spark the conversation regarding gun violence more effectively. These students may argue that alternate forms of rhetoric such as documentaries, posters, handouts, and interviews could provide the audience with stories, statistics, and images all in a single viewing. They may suggest that an alternate form of visual rhetoric would be better suitable for sparking the conversation of gun violence amongst the audience than Alex Arellano would. While these students may have a valid argument, they should consider that the Writing & Rhetoric course aims to educate and expose students to more intricate and complex forms of rhetoric such as Alex Arellano in addition to conventional forms of rhetoric. While other forms of rhetoric may clearly present the information to the audience, Alex Arellano forces its audience to debate Carlos Javier Ortiz's message and the intent of the photograph. The absence of a visible gun in the photograph makes it more difficult for students to dissect Alex Arellano as a rhetorical image and decipher its meaning as a work to spark the conversation on gun violence. Taken from the "What We Teach" statement of the University Writing Program, "Rhetoric may be defined, broadly, as 'the art, practice, and study of human communication.'" In this view, rhetoric is the more inclusive category, accounting for all forms of communicative activity. While Carlos Javier Ortiz's message in Alex Arellano may be harder to discern than alternate forms of rhetoric, Alex Arellano serves as an ideal visual text for use in first-year Writing & Rhetoric courses by exposing students to more complex and intricate forms of rhetoric and expanding their knowledge on the expansive nature of rhetoric.

In the modern era of technology, visual rhetoric is becoming increasingly present throughout daily life and it is increasingly important that rhetoricians explore this form of rhetoric in their study. Specifically, Alex Arellano presents itself as a form of visual rhetoric to be included in the study of rhetoric at the University of Notre Dame through the way it utilizes symbolic elements, serves as a mechanism to call for change, has strong associations to a modern societal obstacle, and complies with the values of the University Writing Program. The techniques and subjective choices that Carlos Javier Ortiz displays in Alex Arellano vividly demonstrate how visual images are strong instruments for argument and spurring conversation amongst the audience. As a visual text included in first-year Writing and Rhetoric courses, Alex Arellano will be incredibly beneficial to students striving to enhance their rhetorical knowledge and continue their study of rhetoric.

William (Will) Reckmeyer, a member of Notre Dame's class of 2023, is a Business major with an interest in Finance. Will is from the suburbs of Philadelphia and has dreamed of attending Notre Dame since he was a young boy. Through his analysis, Will hopes readers will gain a greater understanding of the contemporary issue of gun violence plaguing the United States and inspire them to take action. Will would like to thank his professor, Dr. Erin McLaughlin, for her guidance and support on this essay, as well as his parents, Mike and Sheila, for always encouraging and motivating him.