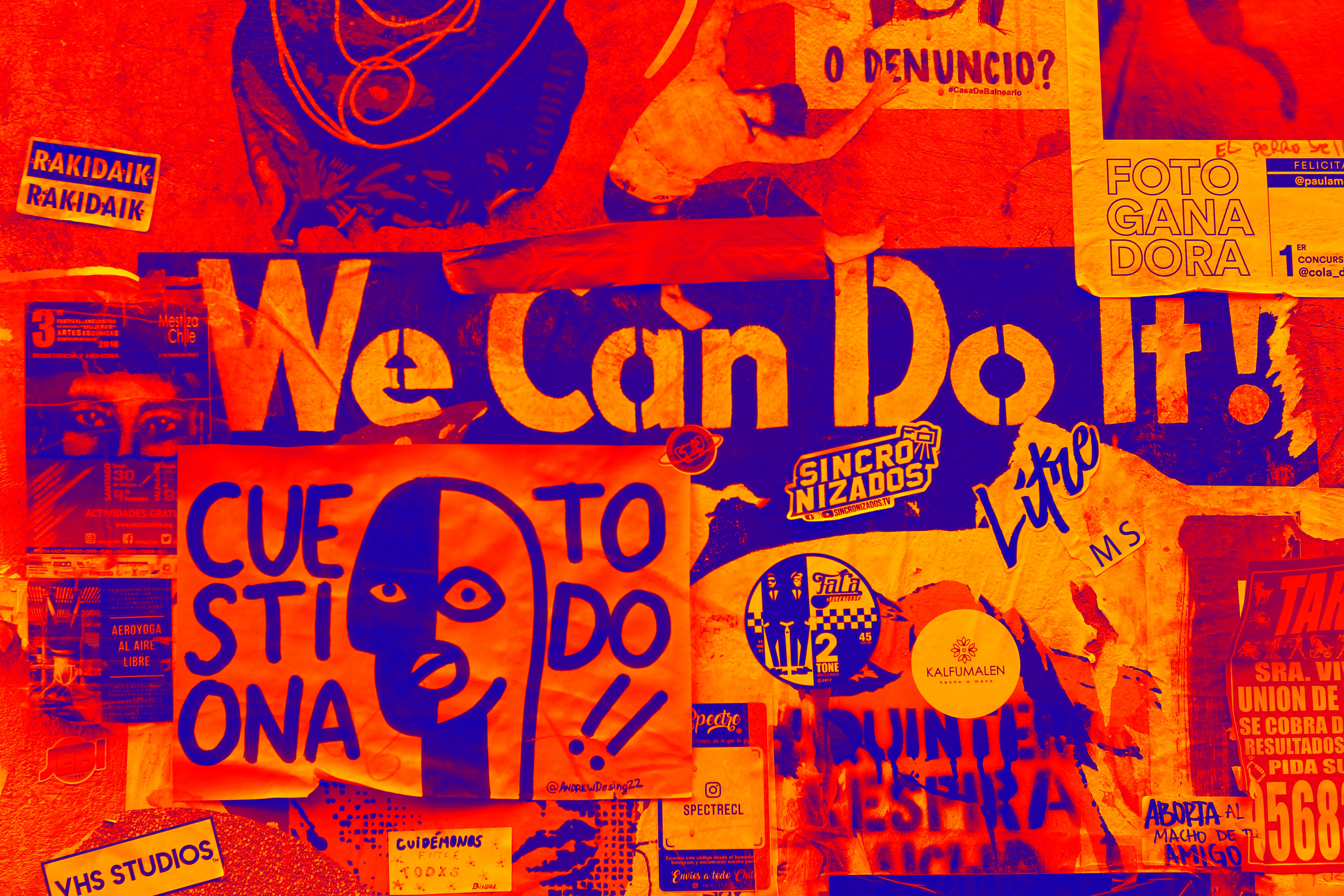 Photo by Mariana Villanueva on Unsplash

A myriad of flashy advertisements and brief commercials litter the internet and often interrupt a person's attempt at watching a YouTube video, streaming a television show on Hulu, or scrolling through her Instagram or Facebook feed. Although most of these annoying ads remain unnoticed, a newly released advertisement grabs the viewer's attention and effectively communicates a significant message during the mere minute for which it plays. This video immediately establishes its targeted audience through the its title and identical first sentence:

"Dear Young People, Don't Vote" ("Dear Young People"). This advertisement specifically encourages young people to participate in the upcoming elections across the country, but it achieves this objective with an interesting technique. Rather than mimicking the various attempts to convince today's younger generation to take political action through encouragement and statistics, the video created by Nail Communications and the progressive political group ACRONYM instead utilizes reverse psychology (Smiley). Within a minute, several elderly people assert the power granted to their demographic due to their commitment to voting and simultaneously urge young people to continue not to contribute to elections. Many of the comments made in the advertisement purposefully elicit anger and contradict popular beliefs of the current younger generation in order to instigate a visceral reaction from the audience and to persuade young people to take action. Therefore, this provocation through the people's shocking and aggressive comments and mocking tone significantly contributes to the ad's ability to effectively motivate current young adults to respond to the video and refute the various statements it presents by participating in the upcoming elections.

In order to convince its viewers to vote, the advertisement first establishes the significance of voting and emphasizes the power that accompanies the decision to take advantage of one of the most fundamental rights of an American citizen. While young adults have regularly participated in elections must less than their elders throughout history, Richard Fry from the Pew Research Center highlights that "Millennials and Gen Xers have a track record of low turnout in midterms compared with older generations when they were the same age." This decision to abstain from voting implies young people's consent for other people to dictate the elections; however, many of these people who refrain from voting deny this implication through their disapproval of the political decisions and actions of the president and other elected officials. In contrast, the video displays the elderly's satisfaction with America's current political environment that ensues from their decision to vote and corresponding ability to sway the election results to mirror their own political agendas and preferences. An elderly man in the advertisement illustrates this contentment when he voices that "everything's fine the way it is" ("Dear Young People"). The video further develops this message as a woman proudly states, "Trump? That was us," and a man echoes this support when he declares, "He's our guy" ("Dear Young People"). These statements exhibit the simple idea that if people show up to vote, then they can influence the results of elections in a way that reflects their political ideologies and thus maintain a feeling of satisfaction with the government and its policies.

The advertisement continues to promote voting specifically to young people through its controversial statements and purposeful attacks on the younger generation. Airing on the platforms such as Facebook, Snapchat, Instagram, Hulu, and YouTube, the video reaches a younger audience due to the prevalence of these social media sites among young adults (Smiley). The opening statement directly addresses this targeted audience and successfully holds its attention as the video progresses. The spokespeople featured in the advertisement clearly attempt to provoke a reaction from the youthful viewers when they address the elderly's greater political influence and proclaim, "Sure you don't like it. So, you'll like some meme on Instagram … You might even share this video on Facebook. But you won't vote. You young people never do" ("Dear Young People"). This condescending declaration attacks the current culture of the younger generation in an outright manner and taunts youths for relying on social media rather than political action to enact change. As a result, the advertisement evokes strong feelings of anger and calls young people to defend themselves and to contradict this assertion by voting. This attempt to infuriate the intended audience persists when the elderly figures proudly state, "[W]e're a generation of doers. Not whiners" ("Dear Young People"). This claim further illuminates the aggression found throughout the video and the people's insults about the more youthful generation's actions and habits. These bold comments serve as stimuli to instill emotions of indignation within the young viewers and challenge them to counter these personal attacks with political action.

Although the video tailors to all young people, the advertisement specifically targets liberals by repudiating various progressive political issues such as climate change, gun control, and systematic racism. The creators of the video again utilize the method of discrediting beliefs in order to provoke a reaction from young liberals and to convince them to vote. For instance, a woman disregards climate change when she derisively announces, "Climate change? That's a you problem, I'll be dead soon" ("Dear Young People"). This statement dismisses a pressing political issue, and its comical extremity illustrates the video's use of satire to criticize how young people disregard the importance of politics. In a similar way, another elderly woman mocks the Black Lives Matter movement and complains that "[she] can't keep track of which lives matter" ("Dear Young People"). This technique continues as two women declare, "Sure, school shootings are sad, but [we] haven't been in a school for 50 years" ("Dear Young People"). The insensitivity of these remarks reaffirms the advertisement's purpose to enrage its audience and result in a visceral reaction that fuels action. Additionally, the controversial topics mentioned expressly align with strong beliefs of young liberals. Statistics about the 2016 election between Hillary Clinton and Donald Trump taken from the Pew Research Center confirm this argument. This research states that significantly more Clinton supporters labelled gun policy, care for the environment, and the treatment of racial and ethnic minorities as significant factors in their decision than did Trump supporters (Fingerhut). These issues thus contribute to the effectiveness of the advertisement in getting young progressives to help elect officials who will prioritize addressing issues such as these.

The way the advertisement negatively portrays the elderly people highlights its tactic of fear mongering and further contributes to its ability to persuade young people to head to the polls; however, this portrayal also unjustly stereotypes all old people. In addition to featuring their insensitive and extreme comments, the video presents the spokespeople in such a way that it identifies all members of the elderly generation as condescending. The proximity of the speakers to the camera and the plain background lead the viewer to solely focus on the speaker and his or her powerful words. This advertisement also accentuates the facial expressions and assertive eye contact that the people in the video rely on to strengthen their forthright statements and to assert their dominance. Scoffing at the beliefs and actions of young people, the elderly men and women continue to exhibit their disdain when they laugh while addressing the viewer. Their snickers when they repeat that "[young people] won't vote" confirm their cynical amusement with the lack of dedication to voting within the younger generation ("Dear Young People"). At the conclusion of the video, the ominous beat of the drum that sounds whenever one of the seniors asserts his or her commitment to voting further elicits a sense of fear about the idea of the elderly continuing to dominate the polls and strongly influence the elections. All of these details within the advertisement culminate in the message that the political domination granted to the elderly should generate concern within younger generations and should motivate these people to diminish the elderly's authority.

Despite the usefulness of this generalization, the video solely characterizes senior citizens as staunch conservatives and aggressive, insensitive people incapable of civil discourse. However, viewers may disagree with this portrayal and identify this fallacy as they consider the dispositions of their own grandparents or other senior citizens with which they interact. As a result, this extreme stereotype in the advertisement may cause people to question its integrity.

Although this claim presents a valid concern, I believe that the hyperbolic aspect of the ad culminates in a satirical message that incentivizes young people to vote. Rather than accurately depicting all elderly people, the advertisement purposefully juxtaposes the stereotypical senior citizen and his beliefs with the stereotypical youthful progressive. The video does not foolishly attempt to convince its audience that all elderly people maintain harsh and insensitive beliefs, but it instead prompts young people to confront the people's statements with their own passionate beliefs and communicate these beliefs through voting.

Critics of this advertisement may also doubt its effectiveness due to the extremity of its accusatory remarks and insults. Since the spokespeople directly and relentlessly taunt the younger generation, viewers may become so offended that they ignore the video and its intended message. In addition, some youths may take the comments literally and merely agree that young people do not and never will significantly contribute to the political system. Many YouTube comments on the video express these reactions and support this counterargument. For instance, one user comments that he "[questions] just how effective this ad will be. It's borderline insulting … It's also likely true what they are saying. Older white people will continue to vote in high numbers, and younger people still won't very often" (Anderson). This statement and the support it received from other users seemingly validate this objection to my argument; however, I cannot accept that the majority of young people will not feel obligated to respond to this advertisement and realize the importance of contributing to the American political system. Many young adults, in fact, already work to spread awareness of the significance of voting and encourage their friends and peers to take advantage of this fundamental right. I would argue that this advertisement uniquely contributes to this movement and serves as a successful form of motivation in the growing attempt to increase the percentage of young adults voting in elections.

With the next round of elections quickly approaching, many people attempt to convince people to vote through posts on social media and articles from various websites and newspapers. This recently released advertisement takes a new and interesting approach to encouraging citizens, and particularly young liberals, to challenge the current norm of political inaction and commit themselves to influencing the elections. The use of satire and reverse psychology within the video identifies its unique approach and redefines the ways advertisements can influence their audience.

Smiley, Minda. "This Comically Savage Election PSA Will Scare Every Millennial Into Voting in the Next Election." – Adweek, Adweek, 28 Sept. 2018, <www.adweek.com/creativity/this-comically-savage-election-psa-should-scare-every-millennial-into-voting-in-the-next-election/ >.

Meghan Scott is from Brookfield, Wisconsin and currently lives in Pasquerilla East as a member of the Class of 2022. She plans to major in Chemical Engineering and work as an engineer following graduation. In "Repeating 'Don't Vote' to Encourage Voting," Meghan analyzes the effectiveness of an ad on YouTube that encourages young people to vote. She considers the immense value of voting rights for all Americans and hopes that young people will continue to take advantage of this opportunity to influence our nation and transform our opinions and beliefs into political action. Meghan would like to thank her Writing and Rhetoric professor, Abigail Burns, for her guidance and encouragement.