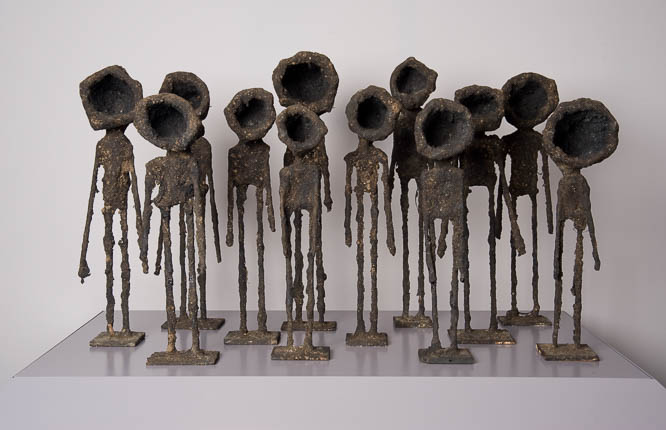 Six hundred feet behind my home, in a gazebo on a lake in the darkness, one of the juniors at my high school took his own life. He was our town's third loss in three years to mental illness. I didn't know him. What I did know is that we all silently wore wristbands in solidarity at school for a few days. I remember it very clearly. The hushed mentions of Owen, the notable lack of laughter in the halls, the teachers subtly hinting at their support in times of stress without explicitly discussing the events that cast a pall over Peachtree City that week. There was a service, and that was it. The administration could not address the issue for concern of copy-cat cases. And then we moved along and forgot about it.

Fortunately, I have no personal experience of the mental state that drives someone to this fate. I do, however, know a thing or two about what it looks and feels like from the outside. To me, it looks like "Maquette for Tunnels."

When alone in the art museum, it is striking, if not scary, to see these anthropomorphic forms screaming silently, skinny and rugged and somehow distant despite standing only one foot away. And you're not really sure what to do with yourself or how to understand the piece, except by reading the description on the card to the right. Isn't that how it feels, though, when dealing with someone who is suffering from mental illness? We want to know more. We want to understand. But just as in the case with this specific sculpture, there is sometimes no explanation other than what we can already see—the bare bones of the situation. The materials. The dates. The artist. The title.

The title in this instance actually tells us plenty as well. A "maquette" is an unfinished sculpture. A preliminary model, a rough draft. All the lives lost to suicide are maquettes, left unfinished with the potential to be something great. Of course, rough drafts are just that —rough and still developing, like all people. However, with the investment of time and love, the rough draft becomes something radiant.

In form, these small beings resemble an old-time gramophone on a record player. This imagery reminds me of the trite but accurate phrase "like a broken record," which is quite fitting for this particular instance. Often those who are suffering the most, when asked how they are doing, say—like a broken record—that they're fine, that they're doing well, and that everything is alright. The words come out mechanically, without any thought, like the needle going through the familiar grooves on the record, because these are the expected answers. These are the answers that won't elicit a "What is wrong?" or an "Oh… I'm sorry," which warrant an explanation, a reason for the instability. Despite major research being done to make strides in understanding mental illness, even the most qualified scientists struggle to find a reason for the instability. And often the feeling is just too ineffably immense with too many factors contributing to the feeling of hopelessness.

Or perhaps, instead of saying these broken-record responses, they are screaming, trying to communicate to no avail. Perhaps they are calling out for help in anguish. Through the glass, we can only see them. We cannot hear them. In situations of suicidal behavior, often the person is crying out, but the issue is that they feel seen and yet unheard. We don't take an active part in the sculpture per the museum's rules, but there are no "don't touch" or "please refrain from touching the glass" signs in real life, except for a) those created by the victims themselves and b) those created by my school's administration. These are the issues we should be taking an active part in and discussing. It is of the utmost importance that we, as a society, learn how to address this problem in a way that honors those lost but does not glorify suicide and discourages copy-cat cases. Although I did not personally know Owen, I have seen the way that a suicide like this can affect a school, and I do know firsthand the feeling of being a friend and desperately grasping for appropriate words to say in a difficult situation, wishing I had been taught more on the subject. These are the issues affecting the youth today who should be growing up to make significant changes in this world, but do not end up doing this because they never get the chance.

In my childhood, some of my favorite films were by Pixar, characterized by the iconic and adorable jumping Pixar lamp animation at the beginning of every movie. These creatures are strikingly similar to that lamp in shape, but they are rusted and eerie, and the spring in the step of that lamp is long gone. To me this represents the loss of innocence and joy of the childhood associated with the Pixar lamp.

This group of statues is ominous, warning us of something morbid. They are, altogether, almost uniform, nondescript. I've heard it said that the loneliness associated with suicide can make people feel like they are just one in the crowd, like they could disappear without anyone caring or even, frankly, noticing. A line from a song in my favorite Broadway musical, Dear Evan Hansen, which addresses the concept and aftermath of suicide in a raw, real manner, mentions this feeling. It says, "No one deserves to be forgotten. No one deserves to fade away. No one should flicker out or have any doubt that it matters that they are here. No one deserves to disappear." The imagery of "flickering out" reminds me again of the Pixar lamp. By schools brushing off this issue and moving along, they perpetuate this idea that the student is just one in a long line of nondescript, premature, unfortunate deaths. And by the end of the year, the student is reduced to someone whose name is rarely spoken, even forgotten by some, someone who is merely an incident for the school to cover up.

But in the piece of art, each of these figures varies slightly, and it is clear that before they were all covered with the same gloom and grouped together by the distinguishing characteristic of suicide, they had unique qualities and unique situations. This is an issue that affects all kinds of people, from celebrities to students in Peachtree City, Georgia. In two ways, this is important, the first being that each and every person has something different to contribute to this universe and matters inherently, and the second being that before they "become a statistic," their cases look different and should be handled with individual care with the knowledge that what is appropriate to say in some situations is starkly inappropriate to say in others.

So what, exactly, can we do about this? How do we ensure that these lives were not taken in vain?

We can break the glass.

Elena Wernecke, originally from Peachtree City, Georgia, currently lives in Breen-Phillips Hall and studies Biological Sciences with a minor in Musical Theatre. In "Maquette for Tunnels," she reflects on recent events in her town evidencing a growing global issue among today's youth as she explores the desolate-looking sculpture by Ronald Gonzalez and her interpretation of its message. Following graduation, Elena plans to attend medical school and pursue her dream in pediatric oncology. Elena would like to thank Professor Cornelius Delaney, whose passion for literature has shown through his many beautiful years and contributions to the University of Notre Dame.