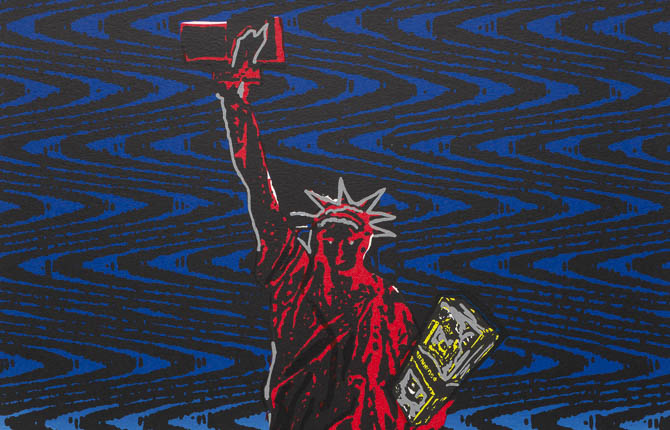 There she stands, boldly and arrogantly. The alleged embodiment of freedom, holding her stack of money high. Screaming through the glass that confines the canvas of her home "Freedom!...Privilege! USA stands for... equality?" At that last claim, the onlooker can easily perceive doubt maneuvering its way throughout her, and vigorously causing an enraged tilt of her eyebrows. Planning to rebel against her own country? Quite possibly. Lady Liberty begins to question whether or not she truly epitomizes freedom now...or if she ever has. In his print "$ American Güey of Life," Xavier Cortez depicts a red Statue of Liberty standing over three images—one is a black silhouette of a man surrounded by one dollar bills with a target painted on his chest; the second is of a red and white silhouette of a man; and the third is of an ambiguous child-like painting. The Statue of Liberty is adorned in a contentious blood-red dress and holds in her left arm a stack of enormous money. This may catch the viewer off-guard, seeing that it has replaced a tablet inscribed with the date of the Declaration of Independence. The torch known for lighting the way to freedom is now interchanged with what appears to be another stack of money, quite possibly symbolizing the idea that money is linked to freedom.

She stands against a warped background, suggesting a warped notion of freedom. The archetypal symbolism of color interacting with images such as money, targets, and the Statue of Liberty in Cortez's "$ American Güey of Life" forces viewers to consider the notion that violence and greed comprise the actual American way of life and instills in them a desire for activism and change.

I want to put into words a rather bold and ambitious claim, but one that I think Cortez was trying to represent in his print: America is not free, but rather enslaved by its own violence and greed. Below Lady Liberty, there are three squares, or interpretively, boxes. In the first box on the left, there are numerous one dollar bills surrounding a silhouette of a man with a target painted on his chest. Here, I see Cortez arguing that the target symbolizes how it is common for people to, quite literally, aim for money. This and the vivid green color of the entire box portrays the idea of greed. Cortez is providing a critique of how greed is a huge aspect of the American way of life. Seeing that this image is completely confined into a small box, we get the idea that Americans will never truly be free but confined by their own greed and incessant desire for money. Until they think outside of this box of selfishness, they will continue to be enslaved. Therefore, confining this image into a small box hinges upon the notion that Americans are limited and defined by their own desire for money.

I would be doing a disservice to the print if I neglected to address the concept of violence, specifically that regarding guns. Cortez incorporates a human-shaped gun target in the central box below the Statue of Liberty. The silhouette is half-red, half-white, representing what the center spot on most targets look like. In the white section, there exists small splashes of the red paint. The red color is symbolic of bloodshed and violence and also happens to be "spilling" into the white section of the target. This, in my interpretation, represents two aspects of American society—violence and its antithesis, peace. When violence is present, in any form at all, it affects the peace. It starts to bleed into the harmony. The two cannot co-exist.

Cortez's print provides a critique on gun violence. This is evident from the gun targets painted on humans in each of the squares below Lady Liberty. "Güey" is pronounced like "way." Gun violence has become a huge part of the American way of life. This was true in 1992 when the print was created, but it is even more true today. Even in the past four years, the number of incidents related to gun violence in the U.S. have increased astronomically. In 2014, there were 51,863 incidents which resulted in 12,556 deaths. In 2017, there were 61,512 incidents which resulted in 15,593 deaths ("Gun Violence Archive"). Based on the evident portrayal of an angry Statue of Liberty (an embodiment of America) and the gun targets on human silhouettes, it is clear that Cortez feels that the American way of life is far from admirable. Gun violence exists most everywhere, but it is undeniable that the issue is worse in the United States than most other countries. In their 2016 New York Times article, Kevin Quealy and Margot Sanger-Katz describe how gun homicides in many countries, such as Germany, Austria, and the Netherlands are just as common as being killed by a falling object or dying of hypothermia or in a plane crash in the United States. But in the United States, gun violence is not an uncommon occurrence. This fact relates to the print as Cortez is pointing out this violence throughout the various aspects of his print (including the gun targets), which is a theme that is even more applicable today. He is evoking emotions amongst his viewers and calling us to take action.

Lady Liberty or Lady Limitation? One could argue that the American way of life is limited. How could peace be possible when there are thousands of U.S. citizens dying each year due to gun violence? Xavier Cortez is calling us to action throughout his print. Whether it is as simple as being educated about the undeniable facts or being an advocate for an end to violence, anything is better than nothing. The combination of greed and violence creates an undesirable way of life. When I first observed this print, I was intrigued by the overwhelming array of different colors. After analyzing the different images, it slowly became clear that Cortez is providing a critique on Americans and their relationships with guns and money, or their common products, violence and greed. Of course this concept does not apply to all Americans (not all are greedy or violent) but all are, in fact, Americans and have a duty to be passionate about effecting change. This is our way of life, but does it have to be? USA: home of freedom or firearms?

Angela Viducich is a proud member of the ND class of 2021 and resident of Welsh Family Hall from Pittsburgh, PA. She is studying Psychology and French but also has a strong passion for writing, particularly poetry. She hopes to become a published author. "Lady Limitation" is an interpretive analysis of a piece of art from the Snite Museum, called "$ American Güey of Life," by Xavier Cortez. Angela chose to highlight many political pieces in the work, including concepts regarding gun control. She hopes that readers will realize the importance of activism and education in preventing violence. She wants to thank Professor Joanna Want for facilitating her writing skills and nominating "Lady Limitation" for publication.