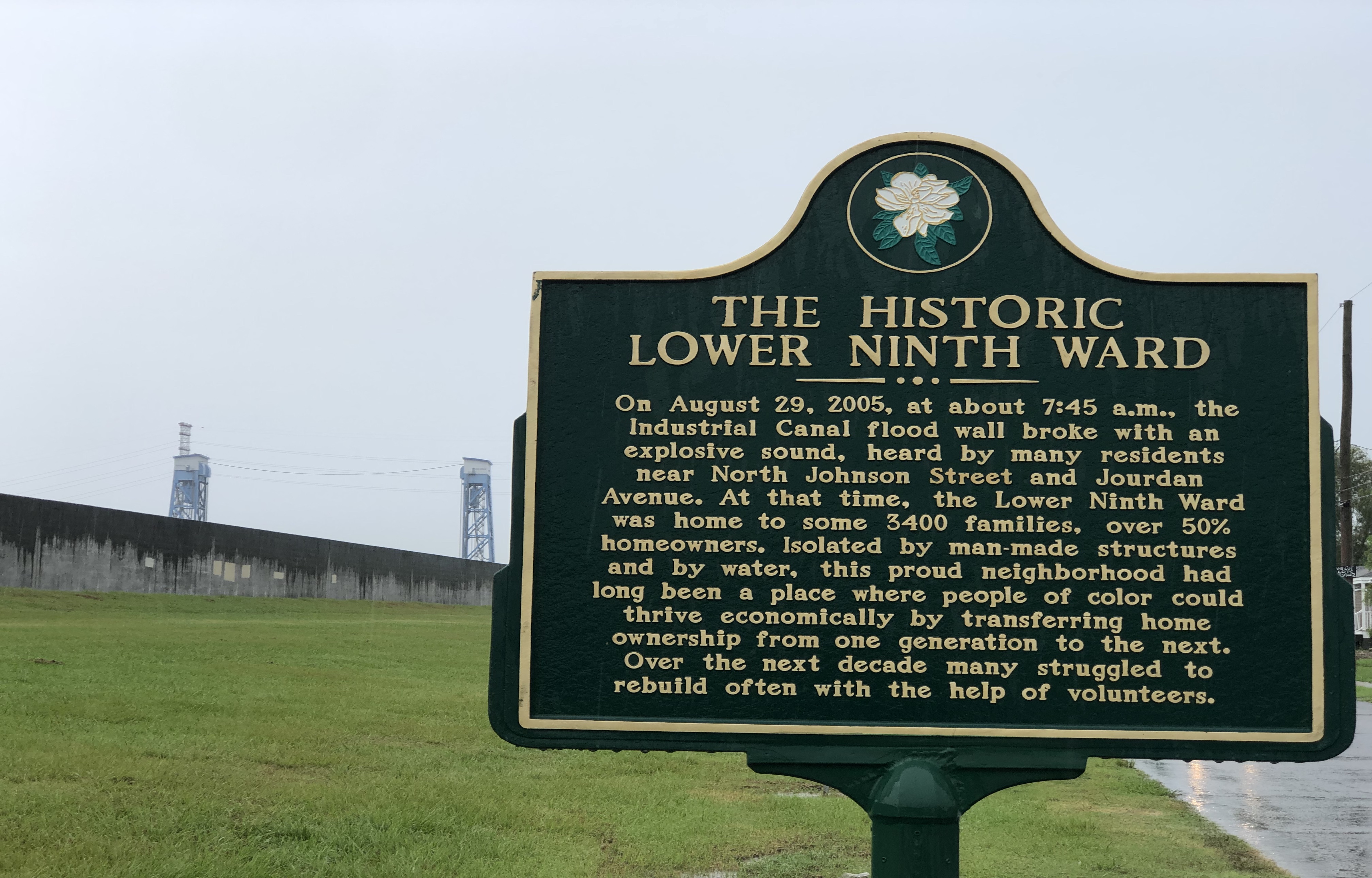 Image by Aysha Gibson, from the author’s personal collection

"We'll be back in a few days," my grandmother explained as we fled our home, taking with us only two sets of clothes. Little did she know, this short vacation would be life altering, and we would return two years later to an almost unfamiliar city. Hurricane Katrina feels like it hit just yesterday. This feeling must relate to why I have such a vivid memory of the disaster that occurred fourteen years ago. I was five years old and lived with my grandmother and aunt in the historic Lower Ninth Ward. After we evacuated, we learned of how Katrina ravaged the city of New Orleans with no remorse. When we realized the extent of the damage, we began to understand the things taken from us by flood waters that could never be replaced: family pictures, heirlooms, and vital documents.

About a year later, residents were finally allowed to see their properties on scheduled buses that took them through the neighborhood. I went with my grandmother and uncle on one of these buses, as they hoped to assess the damage done to our home. As we drove through the Lower Ninth Ward, I witnessed unforgettable sights of a lost neighborhood. These images would stick with me throughout my life. I remember seeing large red markings on every house door, which I later learned were used to record deaths of people and animals on every property. I remember seeing abandoned lots full of dead grass. I remember seeing houses falling off of their foundations, destroyed windows, and debris scattered everywhere. The area was simply demolished and lifeless.

Eventually, we reached my grandmother's house, and I could barely hold in my excitement at finally being back home. I assume in an effort to protect my innocence and also for safety reasons, I remained on the bus with my grandmother, while my uncle got off to inspect the house. As I clung onto the windowsill and eagerly gazed out of the bus, taking in every detail, I realized that this place was no longer my home. My uncle noted that the house had not been gutted yet, so the destroyed furniture was pushed to the back. On the bus, my grandmother, putting up a brave front, remained quiet as she studied the remains of her home. It was now just a hollow building that smelled of mold after being below flood waters that reached at least twenty feet in height.

As we continued to take in the damage to our neighborhood and stopped at more houses, I noticed other buses filled with people. However, these buses differed from ours. Instead of being occupied by heartbroken families, they were occupied by curious, eager-eyed tourists. Both of these buses rode along the same path, but the passengers existed on two different sides of the disaster. As a young child, I was taken aback and very confused by this juxtaposition.

The sea of buses was a result of increased tourism brought by the wake of Hurricane Katrina. Visitors flooded the city with macabre fascination. People, especially, came to the Lower Ninth Ward to explore and take pictures as it was one of the most devastated areas in the city. Disaster tourism is the phenomenon of people visiting an area that has been impacted by a natural disaster. Approaches to tourism after a natural disaster can vary. At times, tourism can be constructive and educational; it shows visitors the issues of an area through direct experience. However, disaster tourism can also distract from the recovery effort and create a gaze of "otherness" towards the victim.

When it comes to disaster tourism, there have been some questions raised about ethics and how it impacts victims. This type of travel typically surrounds death and suffering, which seem to be topics that draw human interest and curiosity. Professor John Lennon, the Director of the Moffat Centre for Travel and Tourism, has contributed much to the concept of dark tourism. His research finds that humans are "attracted to sites and events that are associated with death, disaster, suffering, violence, and killing." As a young person whose family's daily needs after Hurricane Katrina were focused on survival, the rationale for why visitors came to New Orleans was opaque. Visiting simply due to inquisitiveness about the disaster raises concerns about how humans treat each other. Do tourists view residents as fellow human beings who are dealing with a horrible, tragic situation or merely as museum displays that are free to be observed and photographed by the public?

The dehumanization of those who are suffering concerns me especially because my family and I are residents of the Lower Ninth Ward. I remember feeling as if the near total destruction of my childhood home was on display for outsiders to gawk at and take pictures. As a child, I grappled with how outsiders viewed my family's struggle. I think that it is important for tourists to take a step out of their visit and put themselves into the shoes of victims. These questions were constantly racing through my seven-year old mind as I overheard adult conversations. Where did these people even come from and why were they taking pictures of my house? Why could some people afford to visit, while the majority of my neighbors had still not returned to their homes? For a child, the tumult and confusion of strangers with cameras only compounded my feelings of displacement and loss.

In addition to encouraging the gaze from outsiders, disaster tourism can be used by tourist companies to capitalize on tragic situations. Gray Lines, a touring business, restarted business a couple months after the storm and toured visitors around destroyed areas. Today, they contribute one dollar per each passenger to an organization that helps rebuild the Lower Ninth Ward, even though the cost of the tour is fifty-five dollars per adult and thirty-one dollars for a child ("Hurricane Katrina Tour"). This measly contribution to rebuilding barely scratches the surface of the resources needed to reconstruct the Lower Ninth Ward. In essence, it seems that Gray Lines is profiting off of the suffering experienced by residents by not donating enough to the communities impacted by Hurricane Katrina.

Some argue that disaster tourism is pertinent to educate and encourage outsiders to help residents who are suffering. Specifically, some point out that tourist businesses seek to help victims of disaster by allowing visitors to experience the current needs of the impacted area. It is valuable to acknowledge the importance of informing audiences on disasters and persuading others to contribute to recovery aid. Moreover, I agree that some tourist organizations provide great opportunities for tourists to see the devastation wrought on a community. However, I think that there are more productive ways to educate oneself on disasters and to contribute in meaningful ways. Specifically, rather than looking at victims out of bus windows and taking photos, tourists can take time to speak with them and learn about the issues at hand. They can visit members of the communities and ask them about their stories, or they can find organizations that donate to the community directly.

There is much to learn about the Lower Ninth Ward, which was relatively unknown prior to Hurricane Katrina. In fact, despite having been one of the heaviest flooded neighborhoods in New Orleans, the Lower Ninth Ward was "the last neighborhood to have power and water service restored, and the last to be pumped dry" (Allen). Additionally, compared to other areas in New Orleans, the Lower Ninth Ward has been relatively forgotten in terms of rebuilding efforts. One disaster, relief, and recovery organization notes that "rebuilding in the Lower Nine has lagged behind that of other neighborhoods as a result of poverty, the scale of devastation and local, state and federal government inaction" ("About Lower Nine"). There has been more effort by the city to rebuild more prominent areas, such as Lakeview, leaving the Ninth Ward pushed aside. However, Dr. Juliette Landphair, a researcher of New Orleans history, describes a shift in the Lower Ninth Ward from being a neglected area to "a household name across the nation, symbolizing the storm's human disaster." One important factor in the increased public awareness is Spike Lee's documentary film When the Levees Broke, which highlights damaged areas after Hurricane Katrina. Hopefully now the issues of the community will receive recognition in order to increase pressure for governmental action. It should be acknowledged that still today the Lower Ninth Ward lacks schools, grocery stores, and other businesses that were lost due to Katrina and never rebuilt.

I continue to hope to see a brighter day for the Lower Ninth Ward's recovery, one where its residents are treated with dignity and respect. When visiting an area after the disaster, I would ask visitors to consider the following questions: am I placing myself in the shoes of the victims who were impacted by the destruction or disaster? Am I treating their homes and property with respect? Lastly, how can I help those who were impacted and make a positive change in these communities? There is so much to reflect on when it comes to disasters and the rebuilding process in disaster sites. The decision to visit a disaster site should never be made mindlessly, but rather should be undertaken to raise awareness, empathy, and understanding for the people whose lives are irrevocably changed.

As I drive through my neighborhood today I think about how fortunate I am to be able to return to the city I love. Some families were not in a financial position to return to rebuild their lives. Uninvited memories of the loss that surrounded my home, upon our return, often flood back to my mind. My grandmother reminds me that "when it rains, it pours," and I hold hope that people understand that some victims may never be able to recover fully from the heavy downfall of tragedy that Hurricane Katrina brought our neighborhood.

Originally from New Orleans, Louisiana, Aysha Gibson is a member of the Class of 2022 and currently resides in Cavanaugh Hall. She is a Neuroscience and Behavior and History double major and plans to attend medical school after graduation to pursue a career in pediatrics. In "Exploring the Lower Ninth Ward: A Personal Narrative on the Ethics of Disaster Tourism," Aysha reflects on her experience after Hurricane Katrina and urges her audience to consider the impact of disaster tourism on local communities. She hopes this perspective motivates readers to consider other methods of aiding neighborhoods after disasters. Aysha would like to thank her family, especially her mother and grandmother, for their support and resilience, and Dr. Jessica Shumake for assisting and encouraging her through the writing process.