The Second Vatican Council and the Catholic-Jewish Conversation 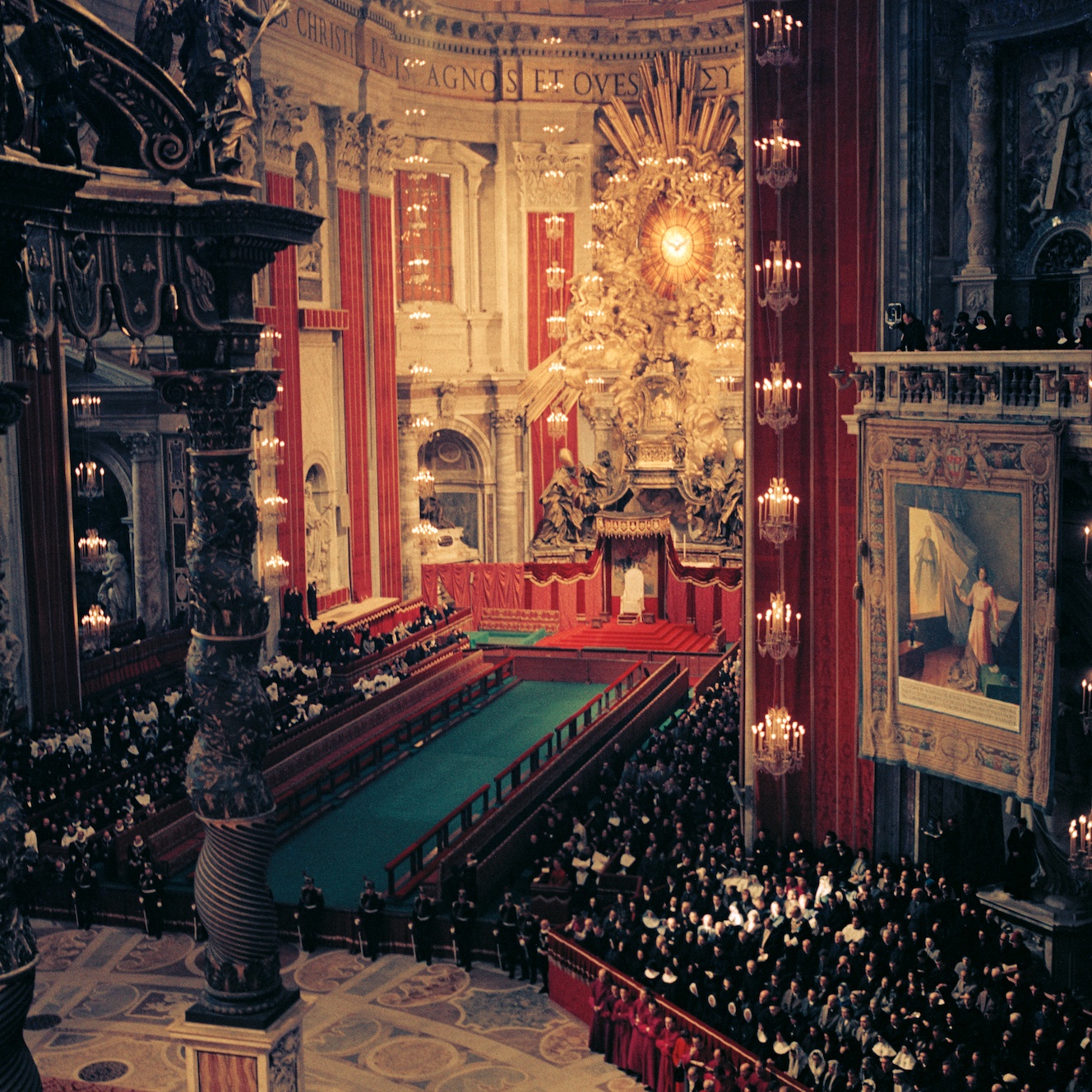 With the publication of the sixteen major documents of the Second Vatican Council between 1962 and 1965, the Catholic Church openly displayed its intention to clarify its official teachings in the face of a modernizing society. The ecumenical council, exploring topics ranging from mass media to Christian education, made a wholehearted attempt to define the stance of the hierarchy on the most important issues of the contemporary world. One of the most progressive documents that arose from Vatican II was the declaration of Nostra Aetate, which sought to expand upon the Church's understanding of their relationship with other religions, specifically Judaism. By far the most controversial and heavily-discussed document of the Second Vatican Council, the final draft of Nostra Aetate advocated for closer relations between the two religions, along with a rejection of anti-Semitic sentiments. The Catholic Church, motivated by political factors that stemmed from their role in the Holocaust rather than theological considerations, understood that Catholic doctrine needed to update its teaching on relations with the Jews. However, while Nostra Aetate as a whole instigated major change in the hierarchy's dogma on Catholic-Jewish relations, internal conflict about the contents of the declaration revealed that the Church did not have the strong unilateral stance on the topic that the document portrayed.

Although Nostra Aetate fostered the formation of a healthier relationship between the Christian and Jewish faiths, the declaration still hinted towards future hopes of conversion to Catholicism, a result of the historical view that the Jews had been cursed by God for their repudiation of Christ. The longstanding belief that the Jewish people had been rejected by God was commonplace in Catholic belief leading up to the Second World War. Albert Niedermeyer, a prominent Catholic priest, thought that "'Jews lived under a curse and continued to be punished by God throughout their history'" (191). In the post-Holocaust period, however, the Church increasingly dismissed this classical interpretation of Jewish history in favor of one that emphasized the spiritual ties between Catholicism and Judaism. Cardinal Augustin Bea, one of the primary architects of Nostra Aetate, underscored the religious significance of the Jewish people after his conversation with American rabbi Abraham Heschel, who stated that Jews "'want to be known, understood, and respected in the context of their history'" (Kaplan 242). Nostra Aetate largely maintained this new rhetoric: "God holds the Jews most dear for the sake of their Fathers" (§4). With the publication of Nostra Aetate, the hierarchy officially recognized the spiritual significance of the Jewish faith, not "cursed" for their denial of Jesus but rather celebrated as ancestors of the modern Church. Yet, more conservative members of the clergy believed that in turning against centuries of Catholic teaching on God's "curse" against the Jews, it jeopardized many of its theological principles: "By tugging at one element of anti-Judaism—the sense of a curse resting upon the Jews…—the bishops risked bringing down a theological edifice constructed over many generations" (Connelly 261). As a result, the Church introduced language in the declaration that expressed optimism for future Jewish conversion: "The Church awaits that day … on which all peoples will address the Lord in a single voice" (Nostra Aetate §4). In adding this new sentence to the document, the Church revealed that the conservative Catholic viewpoint was still prominent during the period.

Perhaps the bigger point of conflict, however, was with the common Christian charge that the Jews were responsible for the death of Christ on the cross, which resulted in the removal of the term "deicide" from the official declaration. Like the concept of a Jewish curse, this claim of "murder" against the Jewish population was certainly a common one throughout the Church's history. Pope Innocent III once suggested that "the Jews, by their own guilt, are consigned to perpetual servitude because they crucified the Lord." Many Catholic theologians, such as Georg Bichlmair, reiterated this idea throughout the pre-war era, believing that the Jews "had the blood of Christ stained on their hands" and would have to work harder than their Christian counterparts in life (Connelly 23). In the early stages of writing Nostra Aetate, this question of deicide once again dominated the Church's discussion during Vatican II. Cardinal Bea represented the contemporary viewpoint of much of the Church in the post-Holocaust era, repudiating the claim that the Jews held sole responsibility for Jesus' death on the cross. Subsequent drafts of Nostra Aetate, however, were eventually stripped of this rejection of deicide, as conservative European bishops "had [the document] shortened behind Cardinal Bea's back" so that Jews could not be exonerated of their crime (Connelly 250). Had the Vatican media not heard about this redaction, which would have led to the opposite interpretation that "'the whole Jewish people … are in fact guilty of the crime of deicide,'" it is possible that the document would have excluded any assurance that the Jews were not responsible for killing Christ (Anderson 82). Indeed, in the final publication of Nostra Aetate, the declaration did not include the term, removing "in an attempt to mollify opponents" (Connelly 265). While the document still removed any Jewish guilt for the death of Jesus, these conservative members of the clergy forced the Catholic Church to remove the most potent phrase from the declaration, and in doing so represented a more classical view of Catholic-Jewish relations.

Undoubtedly, the Nostra Aetate declaration ushered in a new wave of enhanced Catholic-Jewish relations that emphasized interfaith dialogue and a rejection of anti-Semitism, but the transition was more a result of the Christian realization of the horrors of the Holocaust than any theological and spiritual motivations. Pope Pius XII, who was often criticized for his shortcomings in combatting the Holocaust, later stated that "'for centuries, Jews have been unjustly treated … It is time they were treated with justice and humanity … and welcomed as friends'" (Dalin 112). Within the Church, there was clear initiative to rethink the hierarchy's stance on Catholic relations with the Jews in the wake of the Holocaust. In fact, it was Pope John XXIII's meeting with Jewish Holocaust survivor Jules Isaac in 1961 that compelled him to officially commission a new statement on Catholic-Jewish relations from the Council (Connelly 240). In the aftermath of Nostra Aetate's publication, however, many were quick to suggest that the document was not brought about by theological considerations, but rather was the outcome of two decades of Catholic shame over the Church's involvement in the Holocaust. Rabbi David Rosen noted that "some Christian theologians and clergy … claim that Nostra Aetate was nothing more than a contextual product of European Christian guilt over the Shoah [Holocaust] and thus its reappraisal of Judaism is not really relevant for them" (Rosen). The only declaration from Vatican II with no reference to previous Catholic teaching, these members of the clergy denied that Nostra Aetate had any theological significance, and was created only as a political response to the events of World War II. These theologians thought the document was "strange to those operating within mainstream theology," and continued to fight against many of the major doctrinal changes made within Nostra Aetate (Connelly 245).

In short, the Catholic Church made significant leaps in its relations with the Jewish faith by publishing Nostra Aetate during the Second Vatican Council, but intense disputes about the language of the declaration confirmed that the hierarchy was not perhaps as progressive in Jewish-Catholic relations as the document originally suggested. While the Church as a whole saw that updates were necessary following the horrors of the Holocaust and the blame the received because of it, there was clear disagreement within the Church about the extent to which these advances should have been implemented. For many members of the hierarchy, such as those in the Apeldoorn group, the anti-Semitic tendencies that dominated the period surrounding World War II could not be tolerated and it was the Church's duty to actively counter them. Others, however, found it difficult to square these "updates," instigated primarily by political factors, with the Catholic theology of the time. As historian John Connelly states, "For Jews, Nostra Aetate came late, too late. But for Catholic theology it came too soon, and to this day has not been fully digested" (245). In the end, though Nostra Aetate represented a major change in Catholic-Jewish relations, the document still displayed remnants of the stained relationship between the two faiths from the pre-war era.

Connelly, John. From Enemy to Brother: The Revolution in Catholic Teaching on the Jews, 1933-1965. Harvard University Press, 2012.

TJ Dasso is from Lake Bluff, Illinois, a North Shore suburb of Chicago, and is a current resident of Knott Hall. He is pursuing a major in Computer Engineering and a minor in Engineering Corporate Practice. After graduation, TJ hopes to work for a technology firm in Silicon Valley, and is considering attending business school to receive an MBA. In "The Second Vatican Council and the Catholic-Jewish Conversation," TJ explores the writing process behind Nostra Aetate, the momentous Vatican II declaration that clarified the relationship between the Catholic Church and other world faiths, specifically Judaism. While Nostra Aetate provided a new, more inclusive understanding of the Catholic-Jewish relationship, TJ argues that an in-depth look at the drafting process shows that the declaration was heavily influenced by the conservative nature of several prominent members of the clergy. TJ would like to thank Professor Sarah Shortall for her support throughout the semester and for helping him to develop his argumentative writing skills.