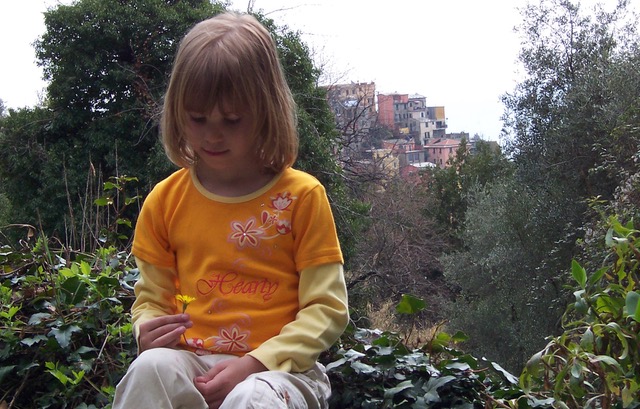 Image Credit: Photo of the author as a child

Opening a milk carton is something that we usually don't need to think twice about. It's one of the habitual actions that we've repeated so many times throughout our lives, that we've come to the point where we don't need to think about which bones to move or muscles to stretch in order to complete it. It's strange to consider the fact that around the world, milk cartons are unheard of – containers such as bags, bottles, and thermoses are favored due to their eco-friendly and cost-effective properties. In other countries, opening a milk carton would be an impossible task.

Gathered at our kitchen table when I was four years old, my parents announced to my siblings and me that over the next five months, we would be collecting our belongings, staking a "For Sale" sign in the yard in front of our cozy house, and packing the entire family into a plane with one-way tickets to Germany – the land of bratwursts and brezels. My brother, at the time aged fourteen, and my sister, ten, were horrified at the thought of leaving behind their friends, hobbies, and schools. As they cried and complained, I sat silently and carelessly, wondering why they were making such a big deal of the news. My naïve four-year-old self didn't understand that "five years" was not equivalent to "five months", the lesson that we had learned the previous week in my preschool.

I soon realized that we would be living in our tiny, outdated apartment for much longer than I had expected. Nevertheless, of my family, I was the fastest and most successful to adjust; I was still a sponge, and my brain absorbed the new culture and accepted it as the norm. I settled into my new life in Europe smoothly, and while my siblings and parents struggled to learn the new language, I excelled in school, and an accent came naturally as my tongue began to effortlessly form the hard, throaty sounds in my everyday conversations. In less than six months, I was riding the S-Bahn train to school by myself, eating apfelstrudel for breakfast, and paying for my snacks in Euros – I was the classic German child.

We moved back to what was referred to as our "hometown" in Michigan when I was ten years old. My family was eager to return – my parents longed for their old careers and house, as well as the short distance between us and our relatives. My siblings couldn't wait to be reunited with their friends and return to their favorite sports and food. For them, our time in Germany had been an extended vacation, an experience in which they had made memories, friends, and routines – but they still thought of their lives in America as the permanent ones. For me, however, life in Germany was all I had ever known.

The real culture shock wasn't moving to Germany, but rather moving back to the United States – the country that I was supposed to think of as my motherland. As I sat in the dreaded middle-school cafeteria, surrounded by hormonal teenagers whose primary thrill in life was engraving messages in the bathroom stalls and professing their love for one another in handwritten notes during class, I stared in wonder at the seemingly harmless "box" of milk on the table in front of me. The stench of overcooked peas and fake cheese engulfed me, but I barely noticed – all of my attention was directed at the cardboard package. I ignored it for the rest of the meal, and though none of my classmates acknowledged the untouched milk, I noticed their nosy sideways glances in my direction.

The pattern continued for weeks. Every day, I would select one of the cubes of milk in hopes that the stiff flaps would magically open before me, allowing me to enjoy my drink. But to my constant disappointment, the desired milk was left unscathed lunch after lunch, daring me to try to tear down its doors. Finally, I decided to confide in my first friend in America, a small girl with golden hair and thick, plastic-rimmed glasses that magnified her blue eyes. She had earned my trust over the past weeks, and at last I revealed to her my greatest secret: I didn't know how to open the milk carton.

I was illiterate in the American culture.

It would have been easy for me to have ignored the milk carton, to have given up and instead gravitated towards the juice boxes, which had plastic straws glued to the side. Never in my life had I ridden the school bus, eaten Lucky Charms, or used American dollars. I could have continued to yearn for my life in Germany, rather than begin to accept the chance to adapt to an unfamiliar environment. Initially, I resented the change– having to fight for a decent seat on the way to school, tasting the blandness of cold cereal every morning, and sifting through piles of heads and tails as I tried to make every purchase. This society was foreign, and not at all what I had grown up with.

I was determined to find a way to adjust to this new life, however, and thus relied on my family and classmates to teach me their ways. The first challenge that I would face would be the stubborn carton of milk sitting in front of me, but I was determined to conquer it. The petite, blond girl perched in the seat beside me in the middle school cafeteria had chuckled when I divulged my secret, realizing the reason behind my odd behavior in the cafeteria. I can recall her breathy voice explaining to me in detailed instructions, "first you have to fold the flaps back, then pinch them together like an origami," her voice laced with hints of gravity as she understood how monumental this lesson was for me. Her fingers flew into action each day, while I would carefully observe and mimic her intricate movements. It wasn't until a few weeks later that I finally mastered her technique, and was rewarded with the sweet taste of refreshing, silky liquid pouring through my lips and glazing my mouth.

Without realizing it, the lost child living in her own fantasy world would eventually evolve into an expert on the country that had once been impossible for her to navigate. As the weeks progressed, I began to find the courage and confidence to introduce myself to new friends at school and join 4-H clubs, volunteer organizations, orchestras, theater, and any other activity I could find. These passions became my sanctuary, and I found comfort in them when homesickness crept into my mind. I would continue to hold these people and hobbies close to my heart for years to come.

I grow with every flight, every school, and every home. My hands now peel open milk cartons instinctively. I no longer struggle to force myself to relate to my peers when they discuss their upbringings – I've accepted that there are movies, songs, and foods that I didn't experience as a child, but I take pride in the fact that I grew up touring castles and roaming the cobblestone streets of medieval Europe. I reminisce over my own fond childhood memories, and the famous German saying immediately comes to mind: Weine nicht über verschüttete Milch.

Leah Capuano is a Neuroscience and Behavior major in the Class of 2021. She plans to attend medical school after graduation, and later hopes to travel other countries in order to provide medical assistance to local residents. While she was born in the United States and now calls Commerce, Michigan her home, she spent the majority of her early childhood in Stuttgart, Germany. Capuano was inspired to write about her experience abroad in "Spilled Milk" when she realized that the differences in her own habits and traditions from those of her peers are the products of the many cultural changes that she has adapted to throughout both moves. She would like to thank her family, for their unending support during their journey overseas, as well as her Writing and Rhetoric professor, Dominique Vargas, for her encouraging her to take risks and challenge herself in her writing.