Joining Forces in the Wake of Laudato Si 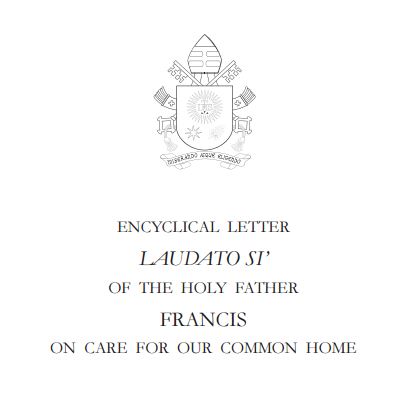 On June 18, 2015, Pope Francis released the second encyclical of his papacy, entitled Laudato Si': On Care for Our Common Home. The encyclical, addressed to "all people of good will" (Francis), confronts the urgent need to address environmental challenges and protect our planet through inclusive dialogue. Leaders from the United Nations Global Compact (Global Compact), the world's largest corporate sustainability initiative, responded to Laudato Si' through an open letter addressed to the Pontiff in August of 2015. The Global Compact complemented Pope Francis on the impact that the encyclical had, offered their support of his call for dialogue, and asked that he call upon businesses and the private sector directly to carry out the vision of his encyclical. The Compact offered its initiatives, which include business plans and educational models on using technology responsibly and sustainably, as a framework to accomplish the goals of Laudato Si'. In writing an amicable open letter to the head of the Catholic Church, the United Nations Global Compact bridged the gap of communication between religious and governmental agencies and incited a vital intersectional dialogue about care for our environment.

Most of the general public is unaware of what the United Nations Global Compact is, let alone what it aims to accomplish through its initiatives. Simply by associating themselves with the Pope's popular encyclical through an open letter, the Global Compact drew the attention of the world. Their letter followed the form of an open letter in responding to an important event in the world and calling businesses to join the movement by focusing on sustainability and the environment. The letter also directly addresses Pope Francis, asking him specifically "to call directly upon the business and financial markets to do more to care for our climate and our common home," upon his approaching visit to the UN headquarters in New York. The letter does differ from many open letters as it does not respond for the purpose of critiquing or opposing, but to thank Pope Francis and offer resources in bringing the vision of his encyclical to fruition.

Since the letter is written in kindness and intended to build a relationship, its language is formal and respectful. The writers start off the letter by using "Your Holiness," the Vatican's prescribed way of addressing a Pope, rather than utilizing laymen's terms. As the letter progresses, a clearly respectful and unifying tone is present, highlighting the purpose of the letter as a means of building bridges between Laudato Si' and the Global Compact's plan. In the first paragraph alone, the authors make their intentions clear by saying "We share the concerns of the Church," and "We welcome your leadership and we embrace the call to create a more just and sustainable global economy." Toward the end, when the authors request further action from the Pope, the Global Compact again appeals to the values of Pope Francis and the Church, mentioning "the ethic of care" and the shared goal to "elevate human dignity." These language choices and the amiable tone of the letter highlight commonalities between the goals of the Church and the UN, and present the Global Compact's position as one of support and goodwill.

Though Open Letter to His Holiness Pope Francis from the United Nations Global Compact Responding to Laudato Si' is addressed to Pope Francis, as an open letter it is intended for a broader audience. The letter is intended for business leaders and ordinary citizens, encouraging all people to work toward a better environment as Laudato Sí calls for. Throughout the letter, information about the UN Global Compact and its initiatives is clearly stated so all readers understand the context and relevance of the letter. In addressing a religious leader, the UN Global Compact highlights the idea that environmental protection is a shared responsibility among all people. The Global Compact particularly calls on business owners among the world's 1.2 billion Catholics to respond to the Pope's encyclical by utilizing the Global Compact's "network based infrastructure as a bridge, connecting the encyclical's vision of integral ecology with practical efforts underway to mobilize responsible business." (Global Compact) The form of an open letter allows the authors to address Pope Francis while calling ordinary citizens to action.

This letter's primary purpose is to call business leaders to action and to ask Pope Francis to specifically address the private sector, asking them to respond to his encyclical by utilizing the Global Compact's plan. This plan consists of business and education models that focus on sustainability and ethical treatment of people and our environment. In light of this, the writers focus heavily on facts and figures to convince the reader of their point in the body of the letter. They cite the number of businesses that work with the Global Compact, give credit to technological advances in renewable energy since 1990, and highlight the number of students that their initiatives help to educate. Still, the nature of the material- the well-being of our common home- necessitates a personal and passionate response from each reader. The letter accomplishes this by demonstrating a sad reality, that "Polluters have been allowed to destroy the planet, harm the health of people and cause damage especially for the poor," (Global Compact). The letter also reminds readers that they are not helpless by calling each to act and reminding them that "those who recognize the power and influence of their own humanity can do tremendous good" (Global Compact).

Seeing that the direct purpose of the Global Compact's letter was to ask Pope Francis to publicly address the private sector in 2015, it may seem irrelevant in 2017 and beyond. The subject matter- primarily what businesses can do to combat climate change, is still largely relevant in a world that is racing to become sustainable before it becomes damaged beyond repair. Most importantly, this letter focused on commonalities between a papal encyclical and a governmental initiative, and requested to join forces in order to create the greatest impact possible. The United Nations Global Compact used their open letter to build bridges between the Church, the private sector, and governmental agencies to address issues facing the modern world. This letter created a framework and set an example for creating an intersectional dialogue so global agencies of all types can recognize their shared beliefs and work together to accomplish common goals for the betterment of our world.

Mary Killeen McCans is a Biological Sciences major who lives in Flaherty Hall. She hopes to enroll in medical school upon graduating from Notre Dame, and she aspires to work in the field of public and global health. Mary Killeen grew up in a Catholic home and is in her fifteenth year of Catholic education. Her love of the Catholic church and interest in working to resolve global challenges, including climate change, inspired her to write a rhetorical analysis of the open letter written by the United Nations Global Compact to Pope Francis about his encyclical, Laudato Si'. Mary Killeen would like to thank her Writing and Rhetoric professor, Joanna Want, for encouraging her to respond to the "call to write" and for her experienced guidance throughout the writing process!