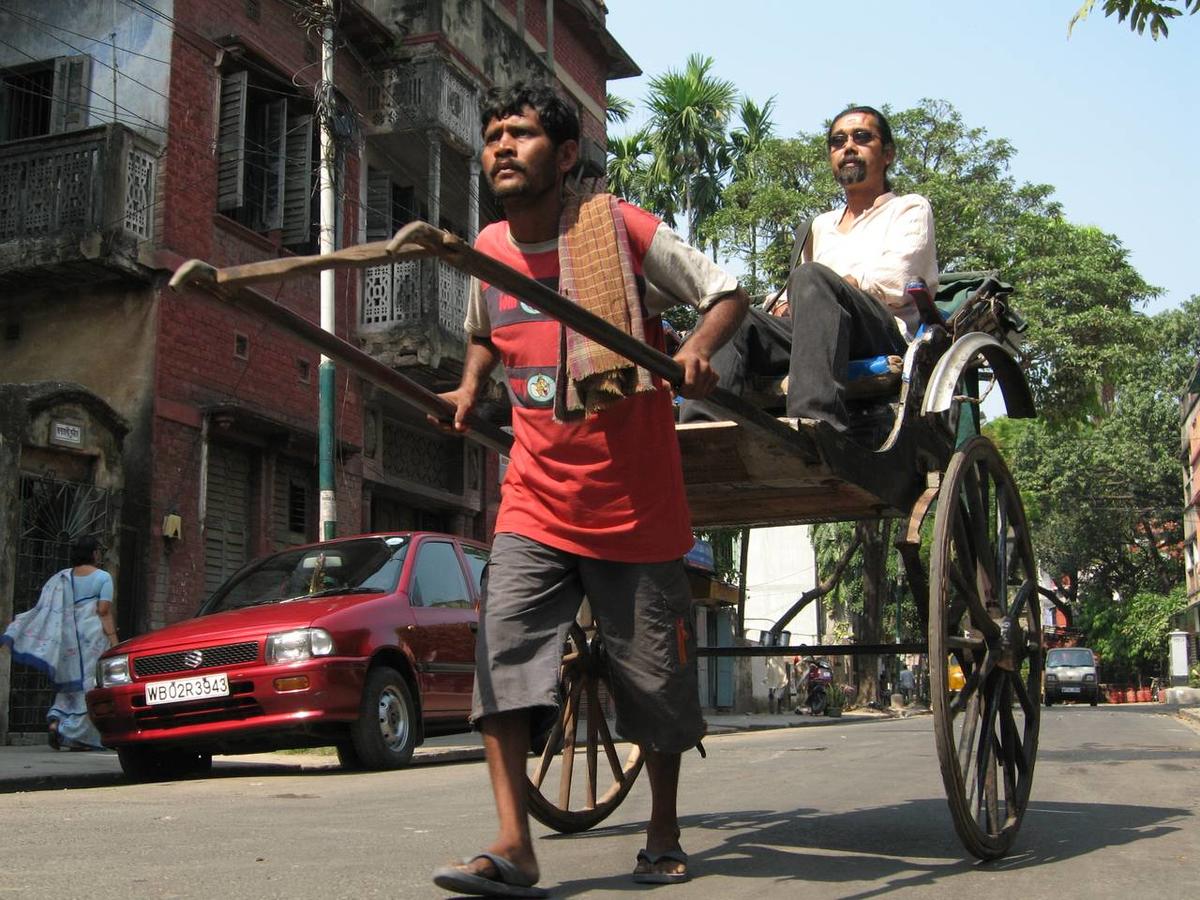 The notion of true happiness is surrounded by ambiguity. Everyone wants to attain it, yet very few know how. This innate human desire to achieve true happiness is a powerful force which drives nearly all actions. As Simon Burnett observes, American "…society is awash with political, organizational, and individual efforts to be happy" (1). All of these efforts, however, will be in vain if those seeking to be happy have a false understanding of the makings of true happiness. The 2011 documentary, Happy, directed by Roko Belic, argues that Americans do indeed suffer from misconceptions on the makings of happiness, and thus are generally not as happy as they could be. The film is essentially structured as a series of case studies on a variety of different individuals, interspersed with many expert interviews. Each case study represents a vastly diverse set of life circumstances and is used to show the audience how to, or how not to, go about achieving happiness. The arguments in Happy, however, extend far beyond what is evident in "surface-level" viewing. A careful analysis of the film's rhetorical functions reveal that, within the film's larger discussion of happiness, there lies a subliminal critique on the effects of industrialization on human happiness.

The filmmakers' use of rhetoric within the film allows them to convey their message critiquing industrialization, without ever explicitly making this statement. The "art of rhetoric," according to James Herrick, involves "the intentional practice of effective symbolic expression" (Herrick 7). Essentially, rhetoric creates new meaning through the use of symbolism. Herrick also notes that there are many different "symbol systems" (Herrick 5), with the most recognizable being that of language. In Happy, the visual symbolic system is used as a tool for persuasion. Through an analysis of the visual symbolism in the documentary, found in not just what is shown, but also in the manner by which it is presented, a subliminal message becomes evident. Happy argues that in the wake of industrialization, the general population has adopted a series of false notions on that which makes a person happy, fueled by the culture of industry which many inhabit today. The documentary is highly effective in utilizing its "visual rhythms," which consists of "content selection, shot composition, camera work, and editing" (Lancioni 109) to subliminally convey this point to its viewers. This essay will discuss several different scenes in which the deliberate utilization of the scene's visual rhythm contribute to the greater critique of industrialization.

One such scene, in which the filmmakers' use of visual rhythm contributes significant rhetorical value is a street interview (00:23:58-00:24:15). The subject of the interview is a well dressed young man, who is standing on a busy sidewalk. The young man states that he wants to be happy. When asked what will make him feel successful and happy, the subject responds by saying "lots of money." There are several noteworthy aspects of this scene worth analyzing. In this case, the shot composition adds significant meaning to the interview beyond the words that are spoken. The setting behind the interviewee consists of a bustling sidewalk, people carrying shopping bags, large buildings, and busy shops. The subject of the interview appears very professional in his business formal-style attire. The setting and subject of this scene are rhetorically significant in that they are both indicative of a highly industrialized society. By choosing to stage the interview with this specific shot composition, the filmmakers prompt the viewer to associate the information presented in the scene with an industrialized environment. Realistically, the filmmakers would have had to interview numerous individuals before they received exactly the answer they were looking for, however, by displaying this sole interview, the content selection insinuates that this is the view of the majority. This insinuation is not likely to be questioned by the viewer since, when viewing a documentary, people tend to "bring with them to the viewing experience an 'assumption that sounds and images stand as evidence… rather than as elements of a plot'" (Lancioni 107). This interview blatantly displays one of the misconceptions about happiness that the film argues against: that it can be bought. The combination of the content selection and shot composition has the effect of leading the viewer to associate the misconception that money buys happiness with the industrialized society being portrayed in the background.

In several instances, the case studies presented in Happy feature people who, either by choice or circumstance, are poor by typical American monetary standards and who live separated from the daily influences of a modern-day industrialized society. In these cases, the visual rhythms serve two purposes: 1) to emphasize the subjects' isolation from urbanism and industrialization, and 2) to portray the subjects as being as happy as possible. The documentary's first case study follows an east Indian rickshaw driver, Manoj Singh, throughout his daily routine (00:01:26-00:04:02). The shot content and camerawork are invaluable to this scene in highlighting Manoj's impecuniousness, and the gap between his life, and the industrialized life. This is particularly true during the sequence showing Manoj at work. There are several shots that are low to the ground, showing a close-up on Manoj's footwear, a tattered pair of flip flops, as well as displaying the uneven terrain, spotted with puddles and debris. In another shot, the rickshaw driver can be seen pulling his passengers as a modern taxicab follows closely behind him. This shot provides a clear juxtaposition between a life of industrialization and the life of Manoj Singh. While thus far this essay has been focused solely on what the visual rhythm has explicitly shown, it is equally important to consider what is not being shown. Filmmakers have the ability to "guide what is seen, for how long, and in what order" (Lancioni 109). By selecting certain content, and omitting others, the filmmakers greatly guide the rhetorical interpretation of a scene. In the case of Manoj, the film avoids showing aspects of his life that he describes as being not favorable. For instance, Manoj describes an issue with his home in which they cannot keep the water out during the monsoon season, but this is not displayed visually. Additionally, Manoj talks about sometimes only having "salt and rice" to feed his family, but this is also omitted. None of these visuals are shown as they would likely garner emotions amongst the audience that are adverse to the film's argument.

One could argue that certain, more "mundane" scenes are left out of the film in the interest of run time, and have no real significance beyond creating a more engaging viewing experience. However, the decision to visually omit certain, less desirable aspects of Manoj's rural and penniless lifestyle deemphasizes these negative aspects, while, simultaneously, emphasizing the positive details of his family life. The shot selection in this scene is by no means arbitrary, or merely circumstantial for editing purposes. Rather, the visual rhythm of the scene (what is shown and what is omitted) is a deliberate effort to guide the viewer's conclusions about the differences between industrialized and non-industrialized life and its implications for happiness.

Perhaps the most compelling and effective use of the visual rhythm demonstrating Happy's critique occurs in the Japanese subway/train scene (00:31:00-00:32:04). In this scene, the narrator describes Japan's issue of "Karoshi" or, literally, working one's self to death. This narration occurs over a series of clips depicting Japanese workers riding the subway in which they are packed body-to-body in train cars. The clips show close-ups of the faces of numerous passengers, which reveal in detail their utter exhaustion and remarkable state of unhappiness. Throughout the entire sequence, not a single individual is shown who appears not to be in a state of depression (none seem even remotely happy, for that matter). By restricting the visual frame to exclusively exhibit individuals with a very specific emotion and expression, the filmmakers' control the viewer's perception of reality. There exists an implication, since every person shown in the frame appears unhappy, that all working Japanese are unhappy within their lives. The intermittent close-ups on the faces of the despondent individuals generate an emotional appeal to the viewer, which intensifies the argument. At one point, the film cuts to a clip displaying an advertisement for a "Five-Hour Energy"-like product on the wall of one of the train cars. Ironically, this advertisement prominently features a beaming, exuberant looking businessman. This clip is displayed briefly before the film cuts directly back to the shots of groggy, depressed-looking commuters. This advertisement marks the first and only time a smiling individual can be seen in the Japanese subway/train scene. The visual rhythm of this sequence generates a significant amount of irony and stark juxtaposition, which directly links the working people's depression with the culture of industry present in Japan. At the close of the scene, the camera shows an outside perspective of the train as it speeds by, then slowly pans over to show a group of large industrial buildings. This move is important as "the slow camera movement gives viewers time to contemplate the image and question its significance" (Lancioni 110). This is a particularly poignant and significant clip within the entire Japanese sequence. Moving the camera from inside the train to a stationary location outside the train allows the viewer to watch the train disappear off into the distance. From the information and images the viewer has been shown up to this point, it is almost as if the passengers are riding off to their demise. The camera then slowly pans over to the industrial-style buildings beside the tracks, further emphasizing industry's role in the fate of these individuals.

A rhetorical analysis of Happy is essential for identifying and understanding the deeper significance present in the film. On the surface, Happy appears to simply address several misconceptions and issues associated with how humans seek to achieve happiness, such as the beliefs that happiness is primarily dependent on money, circumstances, positive/negative incidents, etc. While the film does indeed address these topics, this surface-level understanding is lacking in that it fails to reveal the forces leading to these misconceptions. By analyzing the film's visual rhythms on a rhetorical level, the viewer gains an understanding of the film's greater critique of industrialization and its adverse affect on human expectations for happiness. Through this newfound knowledge and understanding, propagated by the rhetorical analysis of Happy, the viewer is able to engage in a self-assessment to judge how much their preconceptions on the notion of happiness have been impacted by the influence of industrialism in their own lives, which is ultimately the goal of the film.

Herrick, James A. "An Overview of Rhetoric." The History and Theory of Rhetoric: an Introduction, 2nd ed., Routledge, Taylor & Francis Group, London, 2001, pp. 5-7.

Joshua Johnson is a sophomore from Anaheim, California, majoring in Computer Science. Outside of his academic pursuits, Joshua is a participating member of the Notre Dame cheerleading team. His paper, "Industry: The Enemy of Happiness?" closely examines how various types of rhetoric are employed in order to form the subliminal message presented in the documentary, "Happy."