Those Across the Divide 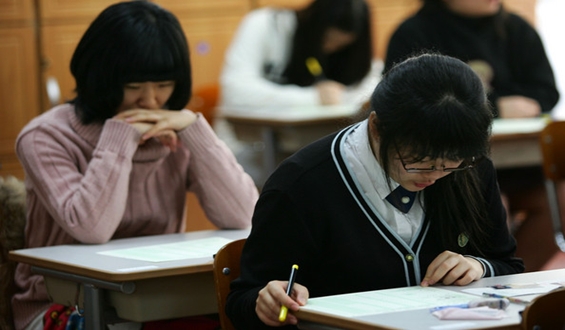 Two countries share the small Korean peninsula – North Korea and South Korea. Though from the same roots, these nations have grown drastically apart in the half-century that the 38th parallel has been acting as our peninsula's wedge. This border, called the Korean Demilitarized Zone, is the most heavily guarded border in the world, secured by military patrol on both sides 24/7. Soldiers are legally allowed to shoot anyone who steps across the boundary without permission. Safely away from this frontier, living in the capital of the South, I had limited knowledge of our counterparts. I believed whatever my teachers and textbooks told me.

South Korea's education system imprinted in me a deep resentment towards North Korea during my elementary years. Naive to the world of politics, I blindly adopted Korea's xenophobic nature. We were taught that to the north lay a primitive territory that leeched off our donations of food and aid. Refugees escaping from these grounds needed to be caught and returned to join the rest of their uncivilized people. Reunification between the nations wasn't even an option worth considering, as it would hinder my country's own progress amid its attempt to become an international power. Even our textbook had an anti-Northern aspect. Though there are only a small number of disparities between the Northern and Southern dialects, these few contrasting words would all be listed in bold text, distinctly separated on opposite sides of the page. As if the English and Korean languages were being compared, the book portrayed the Northern dialect as a completely separate language. Some of the pictures in the workbook were of mere children in uniforms, the poverty-stricken streets of North Korea, and the people that filled these communities. Youths were lined up – all in white collared blouses, red scarves tied around their necks, and navy bottoms – as they saluted towards the distance. The typical neighborhood was excessively run-down and brimming with filthy paths. Homeless orphans sat in these polluted roads, begging for a source of sustenance.

I had to revise this vision of North Korea once I came to the U.S. Through the American curriculum. I learned of the country's oppressive dictators and the civilians who were suffering underneath their jurisdiction, of the elite bathing in luxury during the working class's deterioration. Civilians' only vocation options were the military or the coal mines. As I developed sympathy for the commoners, I was forced to recognize that my Korea was wrong and that I needed to reinvent my understanding of the north.

With the newfound knowledge of my neighbors, I took pride in my decision to begin volunteering at an alternate school for North Korean refugees. I would be performing service as well as opening myself up to the group I had previously spurned. My job was to teach English to the younger defectors, who epitomized the image of Northern street orphans: they had grown up fighting for scraps in the slums, risking their lives to escape south. They attended this alternate school instead of public school, for their background had made it difficult for them to assimilate into regular Korean school.

I got up early that first Sunday to catch the 9:15 AM bus that would lead me to my adventure. I sat through the hour and a half bus ride, listening to the Program Leader's description of what we were to do with the children upon our arrival: we would be teaching them basic elementary English while also trying to have fun with them so that they wouldn't become bored of learning. We were handed Pokémon stickers and car toys to give to them as bribes, so that they would be willing to sit through the whole class.

We arrived at an older brick building in the countryside; the school was surrounded by flat terrain and farmland. It was a sunny day in the middle of summer, and the only visible supply of shade was underneath a traditional pagoda-like structure. I could make out three small figures under the alcove. I inferred these were my new students, and I braced myself to meet the natives of the foreign land beyond the DMZ. The leader called the children over, and the three forms got to their feet. As they sprinted towards us, my observations formed a list in my mind: all boys, elementary schoolers, everyday clothes, and one undoubtedly younger than the remaining two. Upon instruction from the leader, they introduced their names and their ages. I was right about their age gap; one was a second grader, while the other two were fifth graders. They stared at us newcomers, their big dark pupils judging their newest prey.

Our group headed into the study to begin the lesson. With three tutors, we were each assigned to one child. Having never been exposed to the education that South Koreans took for granted, the boys' academic prowess was limited to CVC (consonant-vowel-consonant) word worksheets. These worksheets consisted of several pictures, from which the word corresponding to the image had to be written down. Working with one of the elder kids, I helped him struggle through words like fox, pen, map, and bib: I would ask him what the picture was in Korean, then tell him to write the word in English. If he had no clue what the word was, I would give him a hint by sounding it out. He and the other boy his age were relatively fast, so they finished earlier than the youngest.

We had been told that the refugees could be more physical than the average child, but I didn't realize what this meant until an incident occurred. I was watching over the boys while the other two tutors left to go help prepare lunch. The youngest had become frustrated once he saw the others were done, and he refused to finish the worksheet. He wouldn't even accept the sticker or toy bribes. However, since he wasn't allowed to have fun until he completed the worksheet, he had to stay seated in the wooden chair. One of the older boys went over and taunted him, provoking the younger to kick him – not hard, but just enough. In the next instant the elder had grabbed him and placed him in a strong choke hold. I sprinted over from where I had been standing, attempting to pry the kids away from each other. The little boy was crying and flailing his small arms, while the older boy held on tight. I called out towards the main house for help and had to use pure force to separate the two. One of the school's staff came over and reprimanded the older child for his actions, but that was the end of the episode.

By the time we were heading back home on the bus, I was still shocked at how a child could so viciously attack another. Our leader noticed my confusion and explained: the two older boys were orphans who had grown up in the streets and were used to using their strength to get their way. They had a slight grudge against the youngest boy, who had escaped to China with his mother before arriving in Korea. They occasionally called him the Korean word for "Chinese faggot," and physical confrontations weren't uncommon. I realized how little I knew about these children, and how much I had to work with them to truly understand them.

I went back week after week the whole summer. Working first-hand with the defectors, I gradually came to notice that through all they had overcome, the boys were still just boys. Their scuffles did sometimes go beyond the usual fist fight; that wasn't the last time I caught one of them choking or even trampling one of the others. Their use of language was crude for that of elementary students, for they seemed to be familiar with an infinite amount of curses. Nevertheless, they still resembled the children who live in our neighborhoods. They were good-natured when they got to play with their cars, talkative whenever we played an oral game during the lesson, shy when asked to answer a question, stubborn when they didn't like something, and sometimes even rebellious when they weren't in the mood to listen to the tutors. They knew how to enjoy themselves. They had dreams they wanted to pursue: I spent one trip talking with one of them about his hobby studying architecture, so the next time I visited, I brought him a building model kit. They didn't seem like the stereotyped "broken" fugitives, the lucky survivors of the Kim regime as depicted in media. I recognized that I needed to start seeing other refugees as one of us, the other half of our people. The realization that we shared ambitions, hobbies, and interests made me aware that the standard perception of North Korean defectors dehumanized them into irritating parasites in South Korea, as well as mere objects of pity in the rest of the world. Outsiders may mean well with humanitarian efforts, but refugees deserve to engage in modern society as the people they strive to become, not the remnants of their tortured pasts.

Ye Na (Annie) Han is from Seoul, South Korea, though she also considers herself a Seattleite from Sammamish, Washington. She is a double major in Biological Sciences and Music, with a concentration in Violin Performance. Han is on the pre-med track in hopes of becoming a surgeon, but wishes to play classical music professionally, too. She also holds interest in integrating her two passions by furthering the interdisciplinary study of music in medicine to help patients with conditions from depression to Alzheimer's. "Those Across the Divide" was inspired by a combination of experiences between elementary and high school, during which she realized that global stereotypes are hurting the people of North Korea. Her story reflects the danger of ignorance and the need for education about the 'unknown'. Annie would like to thank her friend Rachel Stine for leading the trips to the alternative school and teaching her that North Korea is a country worth fighting for.