Sex and Sin in the Image of God 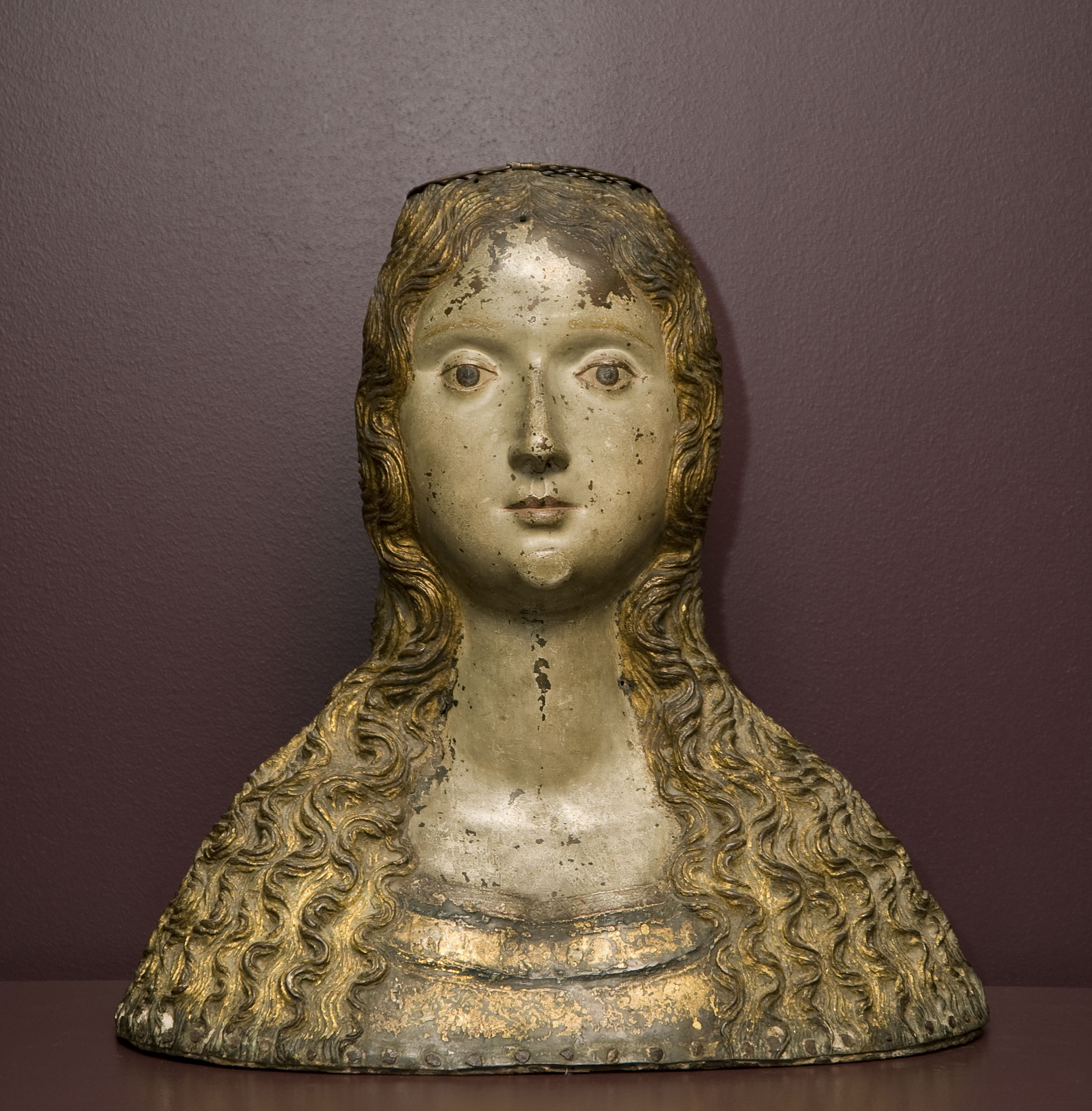 Wholeness. Her subtle bone structure is layered by a full face and rounded jaw which reflects light in a circular halo across her curved complexion. Every dimension of her form is fluid, balanced, and complete. Innocence. Youthful golden ringlets gently drape her neck and shoulders which flow into her breast vested with brilliance and light. Perfection. Images of Our Holy Mother are reflected in her once flawless ivory skin. An ornate ring of light adorns the crown of her head. Obedience. Soft lips pinch tightly together as she honorably commits herself to vows of silence. Her eyebrows arch in a hopeful yet determined expression. This female figure formed from stone and layered with gold is an attempt at approaching human perfection. The eye traces all curves of her skin, all curls of her hair, all reflections of light, all contrasts of shadows, funnels from her chest up to her head, circles her round face.

Then your eyes meet hers. Dark. The concentrated darkness absorbs the brilliance from her surrounding features and pulls you into their depths by gravitational force. Stoic. She stares blankly from her expressionless one-way windows. Tempted. Her pupils dilated, she is mesmerized by something distant, away from the light and life that she embodies. Her eyes never truly meet the gaze of the viewer, as she is tempted by something beyond our adoration. Physically contrasted in color and light against the rest of the figure, the emotional expression portrayed in her eyes is contradictory to the allegory of virginity, purity, and innocence emulated by her gently crafted figure.

This dark-light dichotomy that is so physically apparent in the reliquary bust, is a theme that is mirrored in Umberto Eco's The Name of the Rose. From personal struggles with sin in the face of strict faith, to the broader phenomenon of the drastic shift between the daytime and nighttime abbeys, the allure of darkness cannot be ignored when constantly held under the pressure of light.

As a result of the rule of Saint Benedict, which governed medieval religious practices and beliefs, the pressure of a perfect contemplative life and the suppression of sexuality forced an obsession with sin. As proclaimed in the Rule of Saint Benedict "for it belongeth to the master to speak and to teach; it becometh the disciple to be silent and to listen." Silence was a key tenet of religious piety, and a vow required of those Benedictine monks. In The Name of the Rose, the brothers commit themselves to this vow of silence and are strictly prohibited from talking at certain hours as well as eternally forbidden from laughter. This oppressive weight of silence is visible in the eyes on the Reliquary Bust when compared to her tensely pursued lips. The pressures and expectations that constantly beat down upon the monks mirror the light that is physically beating upon the female saint. Pressurized, lips pursued, her eyes give entrance into the darker, tempestuous side that is highlighted in contrast to the brilliance of the surrounding light.

As the center of medieval learning and culture, the darkness and light portrayed in the abbey give a larger view of the microcosm explored in the reliquary. As William and Adso investigate the murders in the abbey it becomes apparent that there is a "daytime abbey and a nighttime abbey, and the nighttime one seems, unhappily, the more interesting" (Eco 267). During the regimented hours of daily life in the monastery the monks commit themselves to silent prayer, practice vows of abstinence, tirelessly paint manuscripts, prepare meals, give penance, care for guests, educate young men, and consciously commit their every action to the Lord. When darkness begins to creep in, however, the abbey broils with smoke, mystery, murder, prostitutes, deceit, and lies. As the daytime abbey is silent, pure, and pious, the nighttime abbey fills the corridors with shadowy figures, sexual temptations, and grave sins.

Medieval art venerates youth and innocence which are apparent in the form of the female reliquary as well as in the character of Adso in The Name of the Rose. As her long golden hair and unblemished skin give physical measures of her youth, Adso's curious mind and dedication to the abstinent monastic life give behavioral indications of his innocence. This outward devotion and purity however is challenged by the allure of sin when in darkness. Entranced by a beautiful prostitute in the darkness of the nighttime kitchen, Adso is overcome with lust. At the height of his sexual pleasure, his trance is broken by the realization that he is being possessed by the Devil. The dark tunneling eyes of the female saint reflect the same sinful entrancement that Adso experiences, as her hair and modest clothing suggest a deep repression of sexuality. Imagery of darkness versus light highlight the incurable allure of sin and sex for even the most holy of creatures.

These instances of sin and temptation are not isolated to just Adso or the other monks created for this medieval story, but rather reflect a greater cultural context as shown through the period artwork. As the light beats upon the reliquary bust, she is clothed in golden brilliance, an allegory for purity, holiness, and life. However, this pressure of perfection creates an inner temptation that is physically apparent in her deeply dark eyes and her tense stare. It is as if the inner being of the reliquary is pressurized within the hollow stone, attempting to force its way out through the demonized eyes. The female saint's expected perfection juxtaposed with the darkness contained by her form reveals the pressures and downfalls of medieval Christian theological ideas and practices. The demands of a contemplative life and the repression of sexuality inevitably led to a greater lust for sin.

Fabiola Shipley is from Pittsburgh, Pennsylvania and is a current resident of Lyons Hall. She is pursuing a major in Political Science with supplementary majors in Environmental Science and Spanish. However, the study of art has become a prominent and integral part of her academic work during her freshman year. This short essay was an assignment for her Honors Humanities Seminar during their reading of Medieval philosophy and literature. After receiving a tour of the Medieval wing of the Snite Museum, Shipley found startling connections between the 15th century Reliquary Bust of a Female Saint and the main character, Adso, from Umberto Eco's The Name of the Rose. Shipley relates the themes of sexuality and sin found in the novel The Name of the Rose to her interpretation of this work of medieval art in order to argue that repression of sexuality deepens the lust for sin. Shipley would like to thank her Humanities professor, Dr. Eileen Botting, for her support in guidance in writing this essay, and for deepening her appreciation of the importance of art as a means of academic inquiry.