The Power Of Community 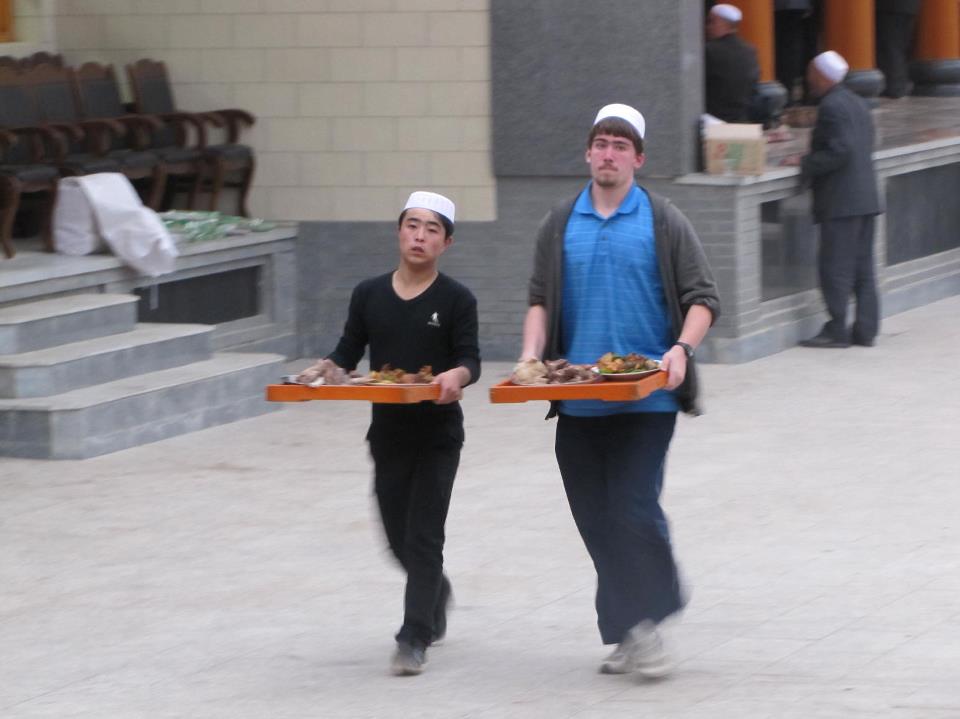 Surrounded by a large pile of various bags and suitcases, we stood awkwardly in the middle of a crowded sidewalk as pedestrians turned to gawk at the group of white children huddled together. Having just arrived in Lanzhou, my siblings and I proceeded to watch after our belongings as our parents went in search of a house where we could stay. Standing under the shadow of a large imposing mosque, I realized that life was no longer going to be the same and fear gripped my heart. Moving from Tianjin, the place of my birth, to this city, almost a thousand miles away, I struggled to stay calm amidst the tumultuous sea of conflicting emotions swirling inside me.

Our family had decided to make this move in order for my dad to pursue a Ph.D. program in cultural anthropology, specifically related to the study of China's Muslim ethnic groups. Motivated by God's promise to Abraham that "all peoples on earth will be blessed through you" (Gen. 12:3, NIV), my dad wanted our family to live among the Muslim community in the city so that we could be a blessing to them. Lacking exposure to much religious and cultural diversity, I was initially reluctant to accept this idea. My hesitation, however, soon turned to adamant resistance when various family members began discussing different possibilities for ways in which we could better relate to the Muslim community. While I was not opposed to our family's policy of only eating halal foods, I was incredibly uncomfortable with the idea of wearing the Muslim white prayer cap. Restricting my diet was one thing; but to express my solidarity in respecting the Muslim community in such a way would be crossing over a marked red line with regard to my personal convictions. The thought of deceiving people into thinking that I was someone other than myself made me feel deeply uncomfortable.

My resistance to such measures resulted in frequent heated intellectual and theological debates between me and my brother as I stubbornly refused to consider other alternatives and firmly defended my resolute principles. I prided myself in being a man of strong convictions with a steadfast identity that would not be shaken. My beliefs caused me to draw a clear line of distinction between "us" Christians and "them" Muslims. I did not view Muslims as being inferior or believe that we should not strive to respect them, but I did see them as being inherently different from myself. While I did not consciously choose to, I began to spend less and less time outside in the community and more time stuck away in our ninth floor apartment.

My life of splendid isolation was not to last, however, as our family decided to move once again, this time to a remote village several hours away. Even though the initial move to Lanzhou was full of challenges, it was still to a large Chinese city populated mostly by ethnic Chinese with a Muslim population of less than ten percent. On the other hand, the village that we were planning on moving to, in order for my dad to conduct field research, was comprised completely of Sufi Muslims, a charismatic branch of Islam known for its mystical forms of worship. Dreading the inevitable move, I could only imagine how much more pronounced the distinction would be between "us" and "them." Having only lived in densely populated Chinese cities of several million people, I was not exactly looking forward to living in a rural farming community of a couple thousand people whom I viewed as being inherently different than myself. To make matters worse, we would be living with a host family in a courtyard home, meaning I would have no safe haven to which I could retreat.

As the bus lurched along the windy mountain paths, my heart, dreading what the next few months would entail, raced and my imagination kicked into high gear. Once we arrived in the village, however, I was momentarily calmed by the peaceful, quiet environment that stood in stark contrast to the obnoxious city noises that I was used to hearing all the time. Putting aside my fears for the moment, I helped remove our family's luggage from the bus and noisily walked down the alley to our family's new temporary abode. Entering our host family's expansive courtyard home, we were warmly welcomed and treated to a simple, home-cooked meal. This initial greeting paled, however, in comparison to the welcome we received from the village's religious leader, whom we later affectionately referred to as "Sufi Super Dude." Despite the fact that these villagers had never seen any Americans before, I never remember seeing anyone look at us with suspicion, but only with big happy smiles.

Sharing a common Sufi identify, the villagers joined together three times a year to celebrate a large memorial festival to commemorate the passing of the religious order's previous leaders. As part of my dad's research, we were invited to attend these festivals, which included an early morning prayer time, followed by a scrumptious seven-course meal, served over the course of half an hour by the young men of the village. As our family was preparing to head over and observe this festival, our host emerged from his room and presented us with Muslim white prayer caps to wear. Not wishing to be disrespectful, I grudgingly accepted his gift and let the cap sit upon the top of my head as we went over to be with the community during this festival.

My initial experience with wearing the Muslim white prayer cap was not one of voluntary acceptance; however, I was later struck by how welcoming and accepting the community, especially the religious leader, was, since we were frequently informed that we didn't need to wear the cap if we did not want to. Despite that fact there were certain cultural and religious taboos that we were told to avoid, for the most part, we were invited to live however we liked. For example, we were told that we could walk into the carpeted prayer hall with our shoes on if we wanted, something that no one else in the village would dare do. While the religious order strictly regulated the lifestyle of its own members, it took great pride in welcoming with enormous hospitality all of its guests. Never before, or since, have I experienced a similar degree of warmth and welcome, especially as an outsider from the community.

Almost needless to say, I was forced to reconsider my staunch refusal to alter my lifestyle in order to better relate to those around me. After having been greeted by the village in such a meaningful way, how could I not want to somehow give back to the community? Transitioning to life in the village still had its fair share of challenges, but my attitude towards living there was slowly changing. No longer did I view my relationship with the villagers as being completely defined by clear distinction between "us" and "them." No longer did I view any and all forms of adaptation as a violation of my personal convictions. No longer did I treat with disdain the proposition that we wear the white prayer caps. We had come there in order to be a blessing to them, but it appeared that they were the ones heaping blessing upon blessing on us.

Seeking to give back in some way, my brother and I decided to join the young men of the village in serving food at various memorial festivals hosted by different families in commemoration of the passing of loved ones. It was the young men's responsibility to serve a given table during the meal as they raced to different food stations and jockeyed for position in order to get the next food item. Running around with platters full of bowls brimming with steaming noodles was not exactly an activity with which I had much previous experience. Nevertheless, I decided to give it a try and followed closely behind another young man, who was serving at the table next to mine, desperately hoping I wouldn't mess up or spill food all over somebody. While I could not have imagined a more stressful activity, afterwards, as the young men gathered to eat the leftovers, I felt immense satisfaction and joy. I had found my place in the community. I was still a white, American, Christian city dweller and they were still Chinese Muslim villagers, but in the act of serving together, we shared the common identity of being young men and members of the same community.

Having lived there for only a few short months, our family had effectively been adopted as members of the community. Whenever we go back to visit on short trips, we are still greeted by the warm smiles of the villagers as they nod with deep appreciation and say, "You've returned? Good." Even though I've now moved across the ocean to attend college here at Notre Dame, part of my heart still remains among the terraced fields and rolling hills of Gaoli village.

Joshua Pine was born and raised in Tianjin, China, and hopes to double major in Political Science and Chinese and minor in Catholic Social Tradition. This narrative argument depicts his experiences living in a Chinese Muslim village and illustrates how community can help us overcome common stereotypes. Through serving alongside the other young men of the village he was thus able to bridge the gap between "us" and "them." Joshua would like to thank his Writing and Rhetoric professor, Ed Kelly, for not only training him to become a better writer and thinker, but also for his role in fostering a genuine community in the classroom. This community, composed of his classmates and Prof Kelly, has meant the world to Joshua and has helped him transition well to life in the US.