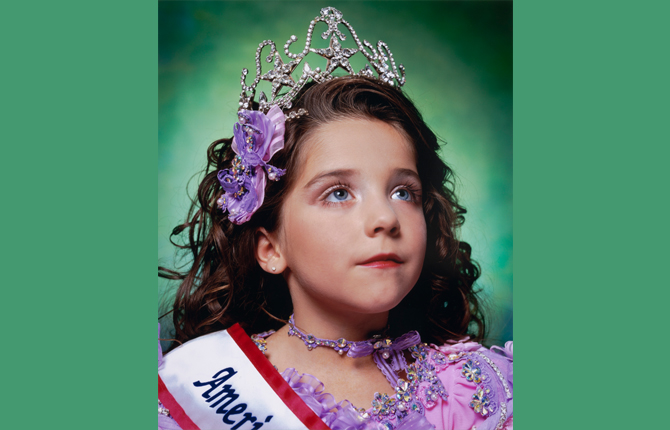 Beginning in grainy, flickering greyscale with Thomas Edison's first films in 1904, and eventually evolving to high-definition TV shows, visual documentations of childhood pageants have assumed center stage of popular entertainment for over a century (Friedman). On the whole, competition itself is nothing new to society, or even human history. Likely inherited from prehistoric "hunter-gatherer" ancestors who competed to live, human thirst for rivalry now manifests itself in activities ranging from moderate to inane, from pie baking and chess to fire-breathing and cliff-diving. Despite its shared competitive nature, pageantry remains separate from other sporting activities; rather than rewarding participants for their acquired skills, judges praise contestants for flaunting what many consider genetically inherited "gifts" or lucky traits, and for covering up everything else. Underneath the frills and curls, one can identify the deep human search for social appraisal and personal validation. These shows have been met with opposition throughout their progression, as countless voices ring with condemnations of objectification and exploitation. Yet pageants continue and even thrive. Fueled by the vicious cycle of producers' wallets, contestants' insecurity, and viewers' indiscriminate taste for entertainment, it remains an extremely lucrative, and consequently fixed, facet of society.

Amid the clamor of protesting voices, distinguished photographer Andres Serrano breathes new life into articulations against child pageants. In place of words, Serrano communicates to his audience through images, specifically his 2003 piece titled, "Jewell Joy Stevens: America's Little Yankee Miss." This photograph depicts a young girl "done-up" for a beauty pageant, replete with makeup, dress, and curls. As she gazes upward into the light with a pensive expression, her mysterious nature invites viewers to dig deeper, to ponder age-old issues of youth, innocence, and purity through a modern lens. Together, Serrano's masterful use of composition, lighting, color, and detail juxtapose the subject's inherent purity with a socially imposed impurity. Ultimately drawing a divide between his audience members, his emotionally charged message separates the passive, who blindly accept the girl's situation as a societal norm, from those who recognize and respond to the exploitation of her true innocence.

The imagery of "America's Little Yankee Miss" subsists in layers, accumulating new waves of meaning upon deeper inspection. With close-cropping, catch-lights illuminating the subject's eyes, and face in line with the upper-third of the frame, the photograph follows the traditional head-shot portrait style; however, its unique setting differentiates it from other portraits. Rather than normalizing the image, the portrait's conventional format highlights its irregularities. The girl's carefully arranged pose leads viewers immediately to her bright blue eyes gazing heavenward, her round, rosy cheeks illuminated in soft light. Yet this peaceful scene quickly gives way to other elements disturbing the image, as the viewer discovers the mascara-curled lashes lining those eyes, the unnaturally bright red lips, frilly purple dress, bejeweled choker tied around her neck, voluminous hair, and, finally, the crowning achievement: a winner's sparkling tiara. Suddenly, the photo's sobering reality hits, replacing innocent notions of a normal young girl with realizations of one who is trying to squeeze into the mold of adulthood well before her time. In the bottom, left-hand corner, one can spot a red and white pageant sash draped over her shoulder, the word "America" cropped to just "Ameri." Though subtle, this suggests a division in American society over photo's addressed issues. Serrano completes the mood with his use of color. The gaudy over-saturation and vignetted green background produce a nauseating toxicity, as if the image has turned sour like old milk.

The image's two-fold nature of both photographic technicality and artistic symbolism provides an effective medium through which Serrano reveals his own views. By choosing a simple backdrop, as well as cropping close to the subject, he establishes clear focus on the girl's childish visage and bright, inquisitive eyes. Reminiscent of the "Mona Lisa," it is difficult to decipher the mood of her expression. Yet, her upward gaze and pressed lips suggest that her focus is elsewhere, perhaps on listening to an authoritative figure. The light shining down on her depicts the sort of interaction taking place between the girl and her superior –one in which she submissively, and even trustingly, absorbs the ideas projected directly into her moldable, young mind. Flooding her with lessons of self-worth, beauty, and success, the light bursts out from an artificial flash, rather than a natural, ambient source, a detail betrayed by the characteristic "pin-hole" shape of the light reflected in her eyes. Serrano exposes his overarching theme of true, unaltered beauty against one that is artificial and disillusioned. By minimizing distractions while still preserving the image's context, he counteracts the pageant efforts to literally cover up what is already whole and beautiful.

While viewing the child frozen in the camera flash, viewers can sense a tangible loss as they behold what seems a snapshot of rapidly fading innocence. Ironically, the perfectly manicured image evokes, though vastly different, memories of one's own childhood, a world of playmates, adventure, sweat, and mud. Despite society's assertions of pageant superiority and privilege, it seems the girl is being deprived of the freedom and natural growth that most childhoods provide. She is taught to find her identity in superficiality, in curating a pleasing display. Though some praise pageants as "confidence-boosters" for contestants, in reality, they only train participants to take pride in a small part of the whole self. Ignoring other personal qualities, the child learns to devote all energy on her external appearance and to seek gratification from others. This approach not only fails to recognize a person's multifaceted complexity, but it also teaches her to find assurance in something beyond her grasp; eventually, once brilliant external appearance will fade, leaving behind a hollow, uncultivated interior.

Rather than simply furthering the long-line of pageant records, the ultimate aim of Serrano's "America's Little Yankee Miss" is to initiate a response. As Serrano reveals the injustice of the situation, he effectively compels individuals to form opinions on an often ignored social issue. With current media's pageant coverage, such as TLC's "Here Comes Honey Boo Boo," the children involved are reduced to objects of consumer entertainment; the sheer ludicrousness of parents who primp and pamper their children as if they were in dog shows often elicits laughs. However, the intimacy of Serrano's photograph speaks over the media din, making clear that child objectification is no laughing matter. Waking people out of their complacency, Serrano utilizes the subject's emotional appeal to make them think critically and independently, to look beyond the deceptive image society projects and to instead recognize the dignified person underneath. As the "Little Yankee Miss" is constantly told to strive for perfection and beauty, concealing her natural self and painting on a more appealing one, she enters an endless chase after personal fulfillment beyond her reach. Yet, as Serrano asserts, true fulfillment lies within. Ultimately, this portrait's deeper messages are not exclusive to the girl in the portrait, or even to the world of pageants, but they refer to issues of human dignity as a whole. Hopefully, the stirring purity of "America's Little Yankee Miss" will prompt viewers to recognize the dignity and wholeness inherent in each person, and, like Serrano, open the eyes of those around them.

Francesca Patti is a member of the class of 2019 and is planning to major in Science Business, a springboard for future studies in Global Health. Despite her residency in Ann Arbor (territory of the University of Michigan), she has always been a loyal Notre Dame fan and loves her home under the dome. She had the pleasure of writing "Detox: Uncovering Concealed Beauty" as a rhetorical analysis piece for her Writing and Rhetoric class. In it, she discusses the rhetorical methods used by photographer Andres Serrano in his work entitled "Jewell Joy Stevens: America's Little Yankee Miss," to juxtapose themes of childlike innocence and purity against exploitation and artificiality. She is especially grateful to all of her past teachers and professors who have helped her grow as a writer, as well as to the staff of the Snite Museum of Art for encouraging students to discover art and to think deeply.