The Football Player Who Wasn't A Jock

By Michael Di Re 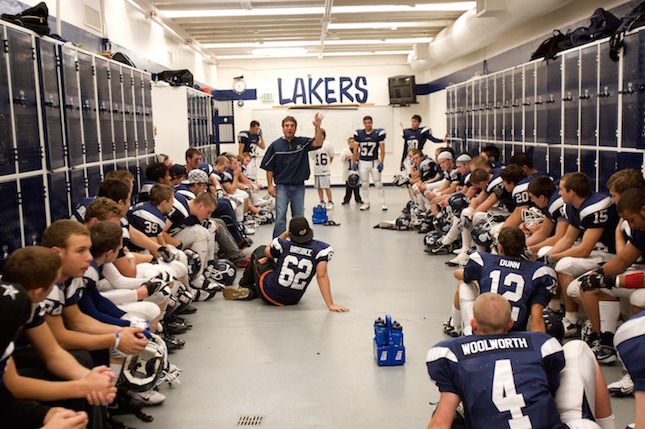 Photograph by Michael Di Re

The school bell ringing at 2:40 didn't denote an end to my day. While others rode the bus home, I worked my way down to an old locker room. I noticed the smell of unwashed compression shorts and dirt covered cleats as I changed into my athletic apparel. The short hand on the clock hit three and the varsity guys ran into the weight room to start practice. Abs came first. If we lost the week before, we got double. If someone cheated or laughed, we started over. Then we got up and lifted free weights, alternating each day from arms and chest to legs and back. Then films started: 30 minutes of offense, then 30 minutes of defense. If we were lucky, we might get an extra 15 of special teams. If I performed poorly in the previous game and/or practice, I was pointed out by the coaches and yelled at in front of everyone while we all observed my poor play.

Next thing I knew, I was squeezing my shoulder pads over my head and strapping my helmet on. My mouth guard always tasted like yesterday's sweat. The captains led a quick jog and stretch and then we'd head into defensive individuals. There, I ran with the other linemen down to the baseball field where coach Lord and coach Ackerman were waiting for us. We'd rotate between the chutes, the tires, and the 2-man sled, and then proceed to tackle each other until we heard the whistle, indicating that it was time for us to run back upstairs and kick the hell out of the scout team offense. Then we got a water break and told a joke or two. Following that, we repeated the process for the offense. When it was about eight o'clock, the coaches decided that we weren't quite fit enough for the playoff game that Friday. So we ran gassers. Just the thought of gassers was enough make a player cringe. They were anywhere between five to eight 200-meter runs with 30-second breaks in between. After killing each other for 3.5 hours, this was no easy task. When it was finally over, I grabbed my things and hurried home. I had four AP classes worth of homework to do. I did this every day of the fall for four years.

Fall was never an easy time for me. I saw all my best friends every day at practice, and while they enjoyed every minute of it, I hid a frown behind my face mask. While their attention was always on the next play, mine was on whether or not I would get four hours of sleep that night. And it showed. When the workload packed on, I became less focused and determined in my helmet and shoulder pads. I was once late to practice because I was at a Junior Statesmen of America club meeting, and my coaches made sure I knew that was not okay with them. While everyone else sauntered back to the locker room after practice, I stayed and did bear crawls (running on all fours) down and back the length of the field. While the coaching staff was impressed with my academic endeavors, they wanted my attention to be solely on football for those 4-6 hour daily practices. They started playing me less and less throughout the season. I deserved it. While I never caught senioritis in the classroom, it definitely came to me when I was out on the field. I didn't have the energy that I did during summer workouts, and I made foolish mental mistakes.

In addition to that, I was no longer a top physical specimen. I was always the biggest and strongest growing up. That phase ended when I leveled off right around 5'9". By the end of high school, everyone had caught up to me, and more. I no longer resembled Rubeus Hagrid, but rather a young Billy Mays. However, my sensational facial hair and broad stature was still enough to cause other students to categorize me as a bonehead, so I didn't blend in with the academic crowd, either. They assumed I was incapable of understanding anything beyond the basics of life. When people found out that I was ranked #1 in our class, I had to explain to them that I could do more than eat, sleep, poop, and play football. Both prospective groups of peers--the football players and the academics-- rejected me, thinking I was more like the other. "Who is he to try and be a part of both groups," they must have thought, "doesn't he know that is social suicide?"

To make matters worse, within the senior crowd, there was this sort of secret society of players who made football their first priority. They ate lunch with each other, they took TAs and played angry birds on their phones in the library while I was wrapping my head around integration by trig substitution, and they went and got five Western Bacon Cheeseburgers each at Carl's Jr. after every game. They used grammatically incorrect and unintelligible phrases, such as "Beast Mode Baby!" or "UOENO" to pump themselves up. Any person with even the most trifling remembrance of their third grade syntax education would point out that it should rather be pronounced "You don't even know," a phrase which still makes no sense in the context of a pregame warm-up. The only other senior not included in this classification of jocks was one of my best friends, Yong, who is a now freshman living in Dillon Hall. We bonded over the fact that we did homework on Fridays before our games.

During one particularly cold and rainy November practice, the defensive ends were competing against double teams. Two big offensive linemen, towering above me and collectively outweighing me by over 300 pounds, squatted down at the line of scrimmage. I was not excited, to say the least. My attitude was in the gutter and my mind was on other things. They caught me off-guard when they went on first sound and drove me back five yards before pancaking me to the ground. I had a hard time getting up, and when I did, I was met with a furious coach howling that I was an embarrassment to the defensive line. I waited for him to finish shrieking and spitting on me through my face mask, then I went to the back of the crowd to cool off.

I didn't notice coach Ackerman walking up to me because I was staring at the ground. But I felt the weight of his arm on my shoulders and I heard him ask me if I was doing all right. I looked up at him and sensed that he noticed it wasn't just sweat that was trickling down my face. I couldn't summon up the courage to tell him that I wasn't all right. He walked me over to the bench and sat down with me. "What's getting to you, Di Re?"

I was still in too much of a state of uneasiness to vocalize anything. He waited until I managed to let out that I was stressed about school. That I had wanted all my life to go to Notre Dame, and that I was waiting to hear back on the decision. I was frustrated that I hadn't been able to keep up with the rest of the team. He looked at me and I knew that he understood. "Why don't you go home," he said. And I did.

The next day, I went back to practice and carried on as usual. But something had changed. The atmosphere felt more accepting of my situation. The coaches recognized that I was playing football because I wanted to, not because it was all I had. They realized that the phrase "get a good night's sleep" didn't apply to me. They were conscious of what I was really passionate about. Coach Ackerman gave me a wink as I walked out onto the field. I knew everything was going to be okay.

December came around, and our season stopped short of a championship game, but that didn't mean it was unsuccessful. At the end-of-the-year party, the coaches went around and spoke about all the players. Comments were mostly about great plays or funny stories. The best players got medals for being all-state. Yong received some of the coaches' resumes, hoping that one day he could offer them a job. But when it was time to talk about me, coach Ackerman went up to the podium and told the story of my struggle to fit in with the others, as I focused more on being a committed student. He proceeded to call me the "Rudy" of our team, not just because I was undersized, but because I stuck in there, even when I didn't have the time to. He held a certificate out in the air and said that I deserved it. It was the annual "Rick Ackerman" award for my "dedication and unselfishness" to the team, more meaningful and gratifying than any all-league or all-state honor could ever be.

Three weeks later, when I open a packet addressed to me from the University of Notre Dame and read the "Welcome home," I knew the rough practices and long nights had paid off. I ran into coach Ackerman in the spring and told him the good news. "I know," he said. Coach Ackerman was not a man of many words, so what I think he really meant was "That's where you belong."

Michael Di Re has long been a fan of Irish football, aspiring to one day be like his childhood hero, Jeff Samardzija. The realization that he was not "wired" to play beyond high school and that he had other hurdles to accomplish inspired him to write this autoethnography. Born and raised near Portland, Oregon, Michael fits the Pacific Northwest stereotype with his rustic beard, fondness for the outdoors, and deep love for Starbucks. He is a self-proclaimed nerd, pursuing a double major in finance and mathematics, but don't let that fool you. He enjoys dabbling with the liberal arts, as some of his hobbies include reading dystopias, participating in poetry recitals, and acting with his fellow Knights in the Keenan Revue. This is Michael's first time being published and he would like to thank his Writing and Rhetoric teacher, Katie Osborn, for enhancing his writing skills. He would also like to dedicate this piece to his high school football coaches and parents for pushing him to be the person he is today.