The Fallacy of the Heroism/Villain Dichotomy: A Visual Analysis of The Dark Knight Rises 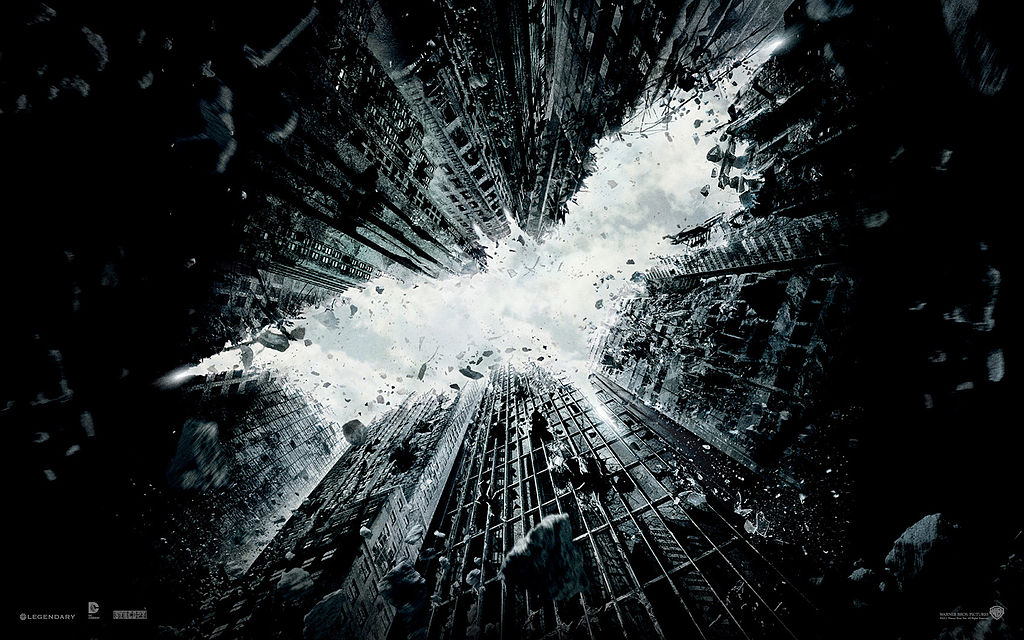 Image by Acrolobato, via Wikimedia Commons

Archetypically, the terms "hero" and "villain" are as distinct as the terms "good" and "evil." They are seemingly mutually exclusive—the hero is courageous, morally and physically strong, popular and willing to save his people at whatever cost, while the villain is despicable, hated, and ill-intentioned to his core. However, when we turn away from the archetypal world of fairy tales and comic books, this distinction is no longer as clear. When we look at real human beings we do not see heroes or villains, but rather individuals composed of varying degrees of both extremes. No hero is perfect, and no villain is completely void of components that constitute heroism. The most recent film adaptation of the DC Comic series Batman presents this truth of human nature. The Dark Knight Rises effectively communicates the blurred line that exists between heroism and villainy through the collaboration of imagery, sound, dialogue, and other film techniques, which troubles commonly held "good vs. evil" expectations and ultimately reveals to viewers a higher truth about the good and evil that exists within all people.

This idea of defying the expected separation of heroism and villainy is first introduced in the opening scene of the film, with the memorial of a fallen "hero" of Gotham, Harvey Dent. The first image the viewer is presented with is an almost indistinguishable dark substance, visibly and audibly cracking like ice under extreme pressure. The lack of clarity as to what is being shown is unsettling, forcing the viewer to question what exactly is being cracked, or what crumbling foundation this image is representative of. It is with this frame of mind that the viewer is next presented with the words of Officer Gordon about Harvey Dent. Paired with the previously mentioned imagery, as well as a heavy score, his descriptors such as "friend" and "inspires us" sound insincere. However, the viewer is soon introduced to the memorial's venue, which is a formal, well-attended affair clearly for the purpose of commemorating a beloved fallen hero. It takes place during evening, and the figures are dimly lit. The lighting, sound, and opening imagery conflict with the objective premise of the scene, in that rather than evoking honor or nostalgia, they instead have a disquieting effect. Without previous knowledge of Harvey Dent, the viewer may not be able to draw any direct conclusions about his character, but this brief clip effectively introduces the concept of questioning those who may be regarded as heroes, priming the viewer for the film's continued rhetorical development surrounding the indistinct properties of heroism and villainy in human nature.

The scene that immediately follows involves workers of a known "masked man" named Bane being transferred onto a plane run by a CIA employee, and this sequence utilizes sound to make implicit claims about heroism and villainy. This serves as the introduction of the film's antagonist (Bane, who is revealed to be one of the men brought on the aircraft), but this "masked man" is ironically not nearly as unlikeable to the viewer as the CIA worker. The CIA officer yells each of his lines in a tone that suggests both arrogance and instability, which directly contradicts the viewer's expectations. Many viewers may associate the Central Intelligence Agency with high-moral, high-intelligence men working to ensure the country's safety, and therefore it would strike them as unusual that this character is presented in such negative light. This presentation causes the viewer to consider flaws in structures previously believed to be practically infallible. When Bane is revealed, his lines are delivered in a calm tone, amplified and clear despite the turbulence of the airplane. The sharp contrast between this and the tone of the CIA worker suggests that Bane is in control, but not in the way typically associated with such terrorist attacks. The music that plays as Bane carries out his plan of "crashing this plane, with no survivors" does not instill terror, but instead makes the viewer feel as if they are almost triumphing right alongside him, bringing about the possibility that Bane's cause may not be entirely ignoble. A faint chant is heard, contributing to the build-up of such triumph, and it alludes to a chant the viewer encounters in higher volume later in the film as the protagonist (Bruce Wayne) makes his triumphant climb out of a prison. Drawing this connection between Bane and Bruce, those who may be thought of as the objective "villain" and "hero" of the film, invites the argument that the two may be more similar than often believed. This scene, with its presentations of characters conflicting with viewers' expectations, as well as its drawing a connection between the antagonist and protagonist, enforces a departure from conventional dichotomous view of heroism and villainy.

An equally important element of The Dark Knight Rises' delivery of higher truths regarding good and evil is its varying presentations of the character Bruce Wayne, who, as previously mentioned, serves as the film's protagonist. Bruce is not only the wealthy heir of Wayne Enterprises, but also the Batman, notorious for saving Gotham from evildoers in previous installments. He is undoubtedly the film's anticipated "hero." However, Bruce does not make a single appearance in The Dark Knight Rises until over eleven minutes into the movie. Up until then, his name comes up only in gossip about his lack of public appearance and apparent failure in running his family's company. "Batman," too, is negatively mentioned, referred to as a "murderous thug in a mask and a cape." These brief dialogues scattered throughout the opening scenes are sharp stabs at Bruce Wayne's character, suggesting shortcomings not often associated with heroism. The viewer is given the impression that Bruce has failed, an impression solidified with several aspects surrounding his first appearance on the screen. He is first seen as a dark silhouette, his back facing the camera, a clear focus on the cane he depends on for walking. Without the knowledge of this man's identity, one would be rational to believe the figure to belong to a dark, evil character. Unlike the triumphant introduction of Bane to the screen, Bruce's introduction portrays him as hopeless and defeated. It effectively forces the viewer to recognize the imperfections, and even inner demons, of the film's "hero."

The film's unconventional introductions of its antagonist and protagonist serve to advance the concept of human nature's inability to fall neatly into the two categories of good and evil, and this concept is further enforced in the scene of these two characters' first encounter. Often in epic fight scenes such as this, the score of the film will rise and fall with each blow and heighten the intensity of the conflict. However, this particular scene is void of any sounds other than those of the fight itself and the dialogue accompanying it. This diminishes the sense of "good vs. evil," as there is no music to celebrate Batman's moments of superiority or convey disappointment in his moments of defeat. Because of this, the viewer can view the scene for what it really is: two evenly-matched, costumed men beating one another up. Objectively, the men are presented to have a considerable amount in common. The lighting and dialogue of the scene also go on to present the characters' similarities rather than their pre-conceived oppositeness due to their "hero" and "villain" titles. Bane brings up their common origin, the League of Shadows, and as they continue to fight, they discuss how Batman left the League and Bane was excommunicated from it. The placement of this dialogue can bring about the realization that these men very easily could have ended up on the same side. As the lighting and, consequently, the mood of the scene continue to darken, yet another similarity between the men is highlighted. The viewer is likely to find Bane's line "You think the darkness is your ally. You merely adopted the dark; I was born in it" as unnaturally poetic given the circumstances. It is effective not in adding suspense to the action, but in communicating to the viewer that both men have darkness in their past, darkness they continue to struggle with in the present. This scene therefore is not received as the expected fight between a "hero" and a "villain," but rather as a conflict between two imperfect human beings who house both demons and seemingly good intentions. This presentation allows the viewer to step away from their presuppositions regarding heroism and villainy.

The Dark Knight Rises separates itself from the unrealistic standards typically established in comic book-type storytelling. It breaks down the dichotomous division of heroism and villainy by highlighting the humanity of the characters that fall under each of these classifications. When the imperfections of "heroes" are recognized, and the possibilities of "villains" having some degree of goodness are communicated, the two categories seem to find common ground, and similarities can be drawn between such seemingly opposite roles. Thus, the film ultimately highlights to the viewer the truth of all human beings' composition of both good and evil.