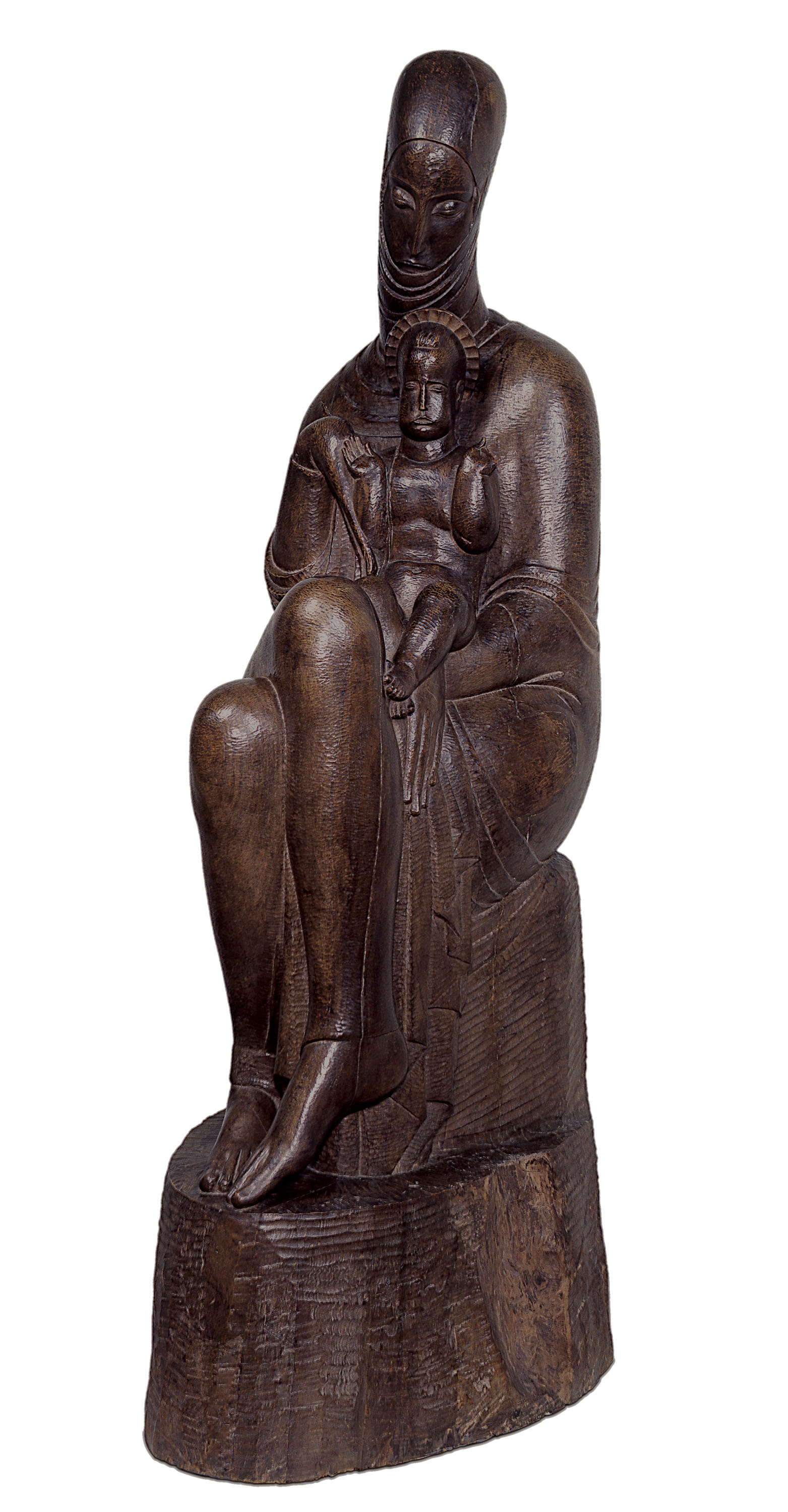 Ivan Mestrovic's walnut sculpture, The Ashbaugh Madonna, sits quietly in a corner of the Snite Museum of Art. Its subject is one of the most familiar in the history of western art: the seated Virgin Mary holding the Christ Child. Mestrovic portrays the two figures on a large scale; Mary's head is elevated above eye level as she gazes at Jesus, gently surveying his outstretched arms. The piece finds definition, however, in the extensive stylization that permeates every feature of the seated pair. Though familiar subject material, the stylized formal qualities of the Ashbaugh Madonna effectively shed new light on the classic interpretation by evoking a profound sense of serenity, reverence, and empathy.

The most apparent stylistic element of the Ashbaugh Madonna is her curious form, which evokes a calm atmosphere. The principal forms of her body are idealized in a smooth manner, with irregularities rolled out in order to leave only the essential curves. Her oblong head slants slowly to the right, dipping with a lowered gaze. Just below, her shoulders gracefully round down into flowing drapery, forming a soft composition- as if the whole figure was once firmly upright but had, with the passing of time, drooped downward in a long sigh.

The result is a form that is tranquil, but that also has an intrinsic dynamism. There is a slow, rolling movement in the curves; the sculpture is immersed in an unhurried rhythm. Further contributing to this dynamism, the Madonna's bulbous knees project outward, insisting that viewers move around the subject lest her prominently crossed legs impede their view. Upon this lateral movement, the form takes on new shapes, curves rolling over one another as they combine in harmonic movement. Altogether, this stylized flow generates a peaceful aura around the Madonna and Child and a pervasive sense of serenity in the viewer.

Upon further examination, however, the sculpture also emphasizes firm lines that are not seen in the overarching form. When closely examined, nearly every secondary feature is carved in well-defined, precise contours. The drapery, while smoothly flowing around the curves of the shoulders, finds crisper definition where the fabric folds. The pleats are not rounded as in thick material, but cut sharply to create angular planes that intersect at one specific edge. These sharp creases fall in swooping lines around the neck and elbows, creating dynamic curves that radiate outward in unison. Furthermore, the Madonna's crooked, nearly adjunct right wrist meets her rising forearm in a strong, acute angle. Past the wrist, oblong fingers emanate from the hand, firmly supporting the child's body in a plane of parallel tendrils. Still more rigidity is apparent in the dramatic lines of the crossed legs, which approach each other at bold angles and cross, firmly, before continuing down through the shins. These complementary lines terminate at the feet, one dangling down and the other strongly grounded, which project back inwards in paths that intersect at the tips of the toes. These intrinsic lines give a vigor to the piece which is not immediately appreciable; they support a mood of energetic wonder and encourage further exploration. The powerful lines and crisp drapery stand in contrast to the overall rolling form of The Ashbaugh Madonna. Together, they work to create interesting dichotomies in both visual appearance and emotional response.

The walnut medium, however, is perhaps the most distinguishing characteristic of the piece. The dark, earthy tones of the stained wood and distinct textures created by the marks of the chisel create a contemplative atmosphere. All across the figure, countless divots remain as evidence of the carving style, which produced a fine texture of shallow concave depressions bordered by small ridges where chisel strokes intersect. An effect analogous to impasto painting, the uneven surface bends and reflects light in all directions, creating a rough, yet shimmering fiber that resonates like the tranquil glistening of a lake. This play on light emphasizes the holiness of the subject material it a slightly surreal quality.

The scintillating effects of the light, however, cannot fully cover the true grit of the walnut medium. Unlike smooth stone, the fine wood texture ripples a mottled burnt umber hue across the form. Frequent imperfections in the wood enhance an introspective atmosphere; these deeper crevices appear arbitrarily around the piece, defects in the grain which create a darker complexion and more complicated expression. The result is a pensive mood, enhanced by the contemplative expression on both faces. In this way, the walnut is altogether human. It is imperfect, and it is the gateway which fosters a connection of empathy with the subject. This connection reveals the true emotional capacity of The Ashbaugh Madonna and is facilitated primarily through the earthy color and intricate texture of the walnut medium.

The pervasive stylization of The Ashbaugh Madonna, therefore, serves to effectively deliver the subject material by eliciting several unique emotional responses. In order to achieve this result, Mestrovic generates a dichotomy between the macro scale and the micro scale. While the overarching form is defined by peaceful, flowing curves, the smaller details of the piece exhibit angular lines and intriguing vigor, a contrast that produces simultaneous emotional responses of serenity and wonder. These emotions are enhanced further through the walnut medium, whose unique texture and color convey a contemplative mood and possibly even an empathetic connection. Taken together, this stylization sets The Ashbaugh Madonna apart from traditional representations of the Virgin and Child, creating a sculpture that is both profoundly divine and emphatically human.

Soren Kyhl is a resident of Des Moines, Iowa and student of the class of 2018 at the University of Notre Dame. He had the pleasure of constructing a visual analysis of an art piece in the Snite Museum as an assignment for his University Seminar on Western Art. For his work, he chose to analyze The Ashbaugh Madonna by Ivan Mestrovic, a preeminent 20th century sculptor. Mestrovic is well known around campus, having spent the last five years of his life in residency at Notre Dame. Many of his works are featured around campus, including The Ashbaugh Madonna in the Snite Museum. Soren's essay examined the various formal qualities and visual characteristics of The Ashbaugh Madonna, deconstructing the true emotional capacity of the work. On campus, Soren continues his involvement in Fisher Hall and the Glee Club while pursuing an undergraduate degree in Chemical Engineering.