Shining a Light on War 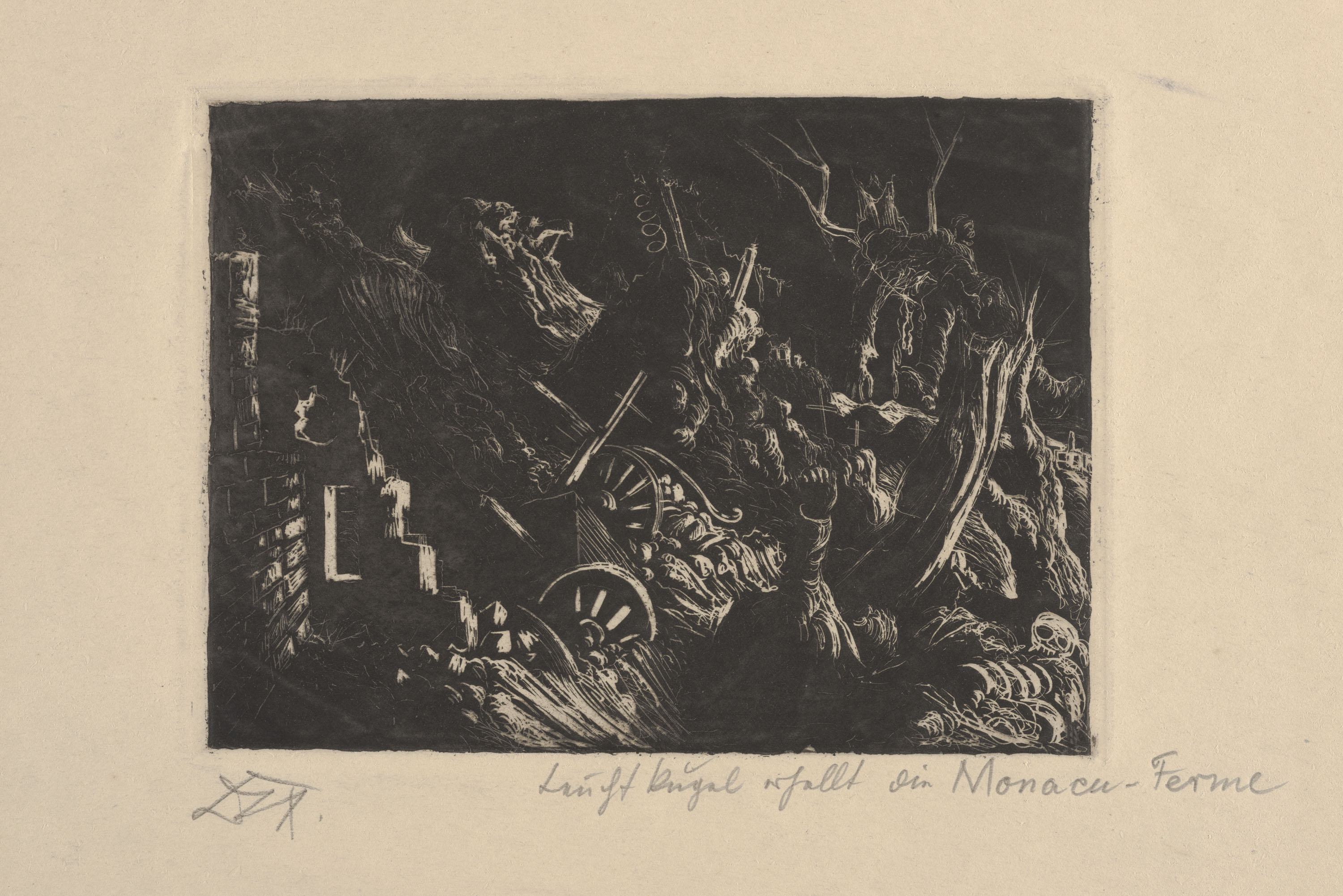 Otto Dix, The Flare Illuminates the Farm at Monacu, from the series The War, 1924

"Dulce Et Decorum Est"
Bent double, like old beggars under sacks,
Knock-kneed, coughing like hags, we cursed through sludge,
Till on the haunting flares we turned our backs
And towards our distant rest began to trudge.
Men marched asleep. Many had lost their boots
But limped on, blood-shod. All went lame; all blind;
Drunk with fatigue; deaf even to the hoots
Of disappointed shells that dropped behind.
GAS! Gas! Quick, boys!-- An ecstasy of fumbling,
Fitting the clumsy helmets just in time;
But someone still was yelling out and stumbling
And floundering like a man in fire or lime.--
Dim, through the misty panes and thick green light
As under a green sea, I saw him drowning.
In all my dreams, before my helpless sight,
He plunges at me, guttering, choking, drowning.
If in some smothering dreams you too could pace
Behind the wagon that we flung him in,
And watch the white eyes writhing in his face,
His hanging face, like a devil's sick of sin;
If you could hear, at every jolt, the blood
Come gargling from the froth-corrupted lungs,
Obscene as cancer, bitter as the cud
Of vile, incurable sores on innocent tongues,--
My friend, you would not tell with such high zest
To children ardent for some desperate glory,
The old Lie: Dulce et decorum est
Pro patria mori.

In his 1917 poem "Dulce et Decorum est," Wilfred Owen sheds a harsh light on what he calls "The old Lie:" "it is sweet and honorable to die for one's country" (Owen, 28). With the advent of modern war, no longer was battle a place of dignity; instead men suffocated in noxious clouds of gas, "blood / …gargling from the frost-corrupted lungs" (22-23). The air rang not with the bellow of officers issuing stern commands, but instead was paralyzed by a silence laced with death, punctuated with the croaks of broken men, "drunk with fatigue," pleading for mercy (7). Likewise, Otto Dix's 1924 etching The Flare Illuminates the Farm at Monacu makes visible the horrors of 20th century war, depicting a scene in which a "haunting flare" is quite literally illuming the remnants of an evening battle (3). Using light and the juxtaposition of stark hyperrealism with an almost caricatural representation of the aftermath of battle, Dix attempts to convey, as Owen does, that upon coming face to face with the realities of modern war, it becomes decidedly hard to swallow.

The first thing one notices about the etching is not, in fact, the illuminated objects, cast in the lurid, prying light of the flare combusting overhead, but instead how abysmally dark the scene is. The work takes on an almost nightmarish quality, the arm of a fallen solider, stiff with rigor mortis, reaching desperately up out of the well of Dix's consciousness. Contributing to this is the inherent sense of movement in the piece; sharp, quick lines constitute the landscape, evoking the wavy, ephemeral quality of dreams. It is obvious that whatever occurred to cause such destruction occurred very quickly; the overturned cart, the exposed corpses, the bleached skeletons, all convey a suddenness of action. One can imagine those present "…Fumbling / Fitting the clumsy helmets just in time" (10), upon hearing the characteristic "hoot" of a mortal shell (7). Each object––the rustic farmhouse, the fruit-bearing tree in the garden, the flesh of a human being––in that final moment, all blend together in a Stygian swirl, perishing simultaneously, instantaneously to the weapons of the 20th century. Likewise, in the aftermath, their inky, shattered forms bleed into each other.

Upon approaching the smoking wreckage, the advancing troops send up a probing flare, its acrid tendrils of light illuminating the right-hand side of the etching. Alongside the incredibly detailed husk of a splintered tree, they see an almost farcical human skull, like something out of a macabre cartoon, once again evoking the fantastical, unearthly quality of their nightmare. While at the same time communicating movement and the franticness of battle, Dix also illustrates, in the mid ground with only their outlines visible, a number of grave markers, reminding us of the permanence that was born in that frenetic moment, not only in the deceased, but also in those that walked away physically unscathed. Owen writes: "In all my dreams, before my helpless sight, / He plunges at me, guttering, choking drowning" (15-16). The horrors unearthed in this scene no doubt haunt even those that wreaked them.

At the same time, by only illuminating a portion of the scene, Dix makes us wonder what lies unseen in the darkness. Was there a family living in the farmhouse? Who escaped, and who perished? In asking these questions, we are forced to acknowledge that there will always be aspects of war that remain unlit and unknown. Perhaps most importantly, a civilian will never experience the death of a solider in combat; no matter how much we read about it, we never encounter the "smothering dreams," in which we relive the scene over and over again (17). Battle will often seem both "sweet" and "honorable," until one's confronted with the mangled body of a countryman, his face "hanging…like a devil's sick of sin" (20). Just as the flare only illuminates one side of the scene, second-hand accounts offer only a two-dimensional experience of the horrors of war. In the etching, the landscape behind the immediate wreckage is hidden in shadow, as are the many thousands of scenes just like this one that undoubtedly dot the smoldering French countryside; what we see in the work is only a small sample of the horrific aftermath of modern war.

One hundred years have elapsed since the beginning of the "War to End All Wars." Obviously, that was a misnomer. Instead, human conflict has evolved to an even more terrible form. We now possess the capability to incinerate hundreds of thousands of human beings in a single moment, to reduce entire cities to mounds of ash. Even today, potent chemical weapons are used to maim and kill thousands of innocents, and young men flock to the opportunity to commit atrocities in the name of their particular cause. To hide from this reality is to perpetuate the "Old Lie." To truly bring about the end of war will require a thorough illumination of it; not only of its aftermath, but, consequentially, of what we are willing to do to another human being.