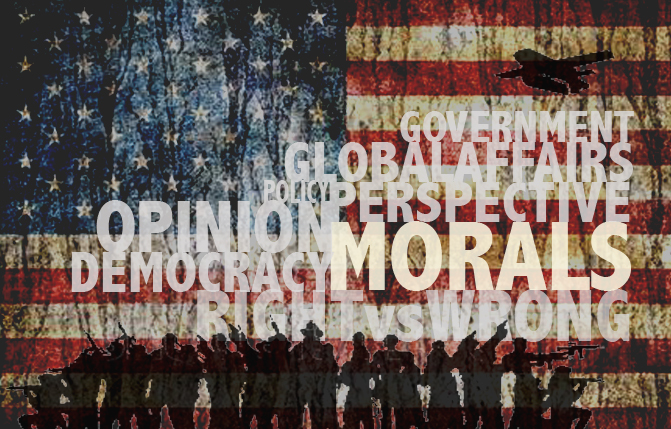 What connotations does moral authority hold in the 21st century? Is it fair to say that moral authority is immutable because the truth never changes? Or is it affected by situated and role identities of an individual? Is it justified to engage in immoral activities to maintain peace and goodwill? Different people have different ways of looking at a situation, and their thought process generally determines their stance on a particular issue. In an interview with "Democracy Now," Dr. Cornel West expressed his derision for what he perceived as President Obama's hypocritical response to the killing of Trayvon Martin and the acquittal of George Zimmerman. West speaks of the ineffective criminal justice system prevalent in the United States that still practices laws like stop and frisk and stand your ground. He refers to the social set up of America as "Obama's plantation"(27:22) where instances of Wall Street criminality and "re-niggerising of the black"(27:15) abound. West questions Obama's priorities as president and draws the reader's attention to the fact that in his five-year term as president, Obama has achieved very little in terms of the issues he promised to tackle, having only talked the talk and not achieved much in reality. Giving concrete examples, West points to the discrepancies that exist in the United States administration, where commissioners are rewarded for their discriminating acts.

As stated by him at the very beginning of the interview, West introduces his main claim that "Obama has very little moral authority"(24:52). West uses two main subclaims to establish and support his view. First, he vehemently calls Obama the "drone killing president"(36:28); subsequently, he attacks Obama for not being progressive enough to stand against and repeal past policies that are unjust. As much as I agree with West, some of his arguments are based on faulty reasoning and incorrect assumptions. Moreover, West overlooks many important aspects to the discussion at hand and oversimplifies the situation to suit his needs.

Speaking to the show's host, Amy Goodman, West calls Obama "a global George Zimmerman" (25:05), comparing the collateral killing of 221 innocent children through the military's use of drone strikes to Zimmerman's killing of Martin, an unarmed minor. West's claim rests on making a faulty analogy as the rationale behind Obama's actions are justified, whereas those behind Zimmerman's hold no basis. As Leonard Pitts mentions in his article, "Perceptions of race and criminality," Trayvon Martin's suspicious behavior could have been the consequence of his having "turned around in an unfamiliar neighborhood," or having a conversation on his phone that he didn't want his dad to overhear. On the other hand, President Obama uses targeted killing only when he is assured that the target is a haven for terrorists. While West correctly states that the death of innocent people is a global concern, I believe that drone killing can be seen as a major humanitarian advancement in that it is less damaging than sending out military men to end terrorist activities and more discriminating than opening fire on a large expanse of land which might end up involving more people than required. Targeted killing helps keep American servicemen out of necessary risk of death in a war field and prevents loss of livelihood for many families.

Furthermore, West's claim that instead of identifying himself as Trayvon Martin, Obama should say that he could have been "Anwar al-Awlaki" or the 221 other "precious children, who are as precious as the white brothers and sisters in Newtown" (31:11) rests upon the questionable assumption that President Obama functions according to the same value system as his. However, West should note that it is not the responsibility of the President of the United States to take care of every human being on the planet equally as he feels it should be. While Obama's value system might tell him to keep in mind the pain caused to victims of drone strikes, he acts in keeping with his duties as President. These duties require him to put the well being of the United States and its citizens before his own moral values. In today's world, characterized by political unrest and hostility between nations, it is the need of the hour to eliminate all possible threats, even if that means using weapons that result in the unintended death of innocent people.

Moreover, West is mistaken in his aversion towards drone strikes as he overlooks the consequences of not using them. As Sasha-Dominik Bachmann points out in "Targeted Killings: Contemporary Challenges, Risks and Opportunities," targeted killing provides a military benefit as a holistic counterstrategy against "hybrid threats" (272). She defines hybrid threats as technological, ecological, economical and scientific threats including cyber attacks against strategic infrastructures" (273). These threats, which can surface anytime and anywhere, make it important for countries to possess sufficient kinetic options of suppressing the threats to protect their own homes. Thus, it is highly imperative for the United States administration to develop and employ these weapons for use when needed. The only reason West can sit in a studio safely while giving an interview on national television is that there are intelligence experts working day and night to identify potential terrorist attacks and put an end to them using drones before they strike America.

Not only does West fail to delve deeply into the pros and cons of drone killing, he oversimplifies the issue of Obama not having dealt appropriately with oppressive policies of the past. West questions why the administration shuts its eyes to the misdoings of previous presidents. West claims that Bush was the "capture and torture president"(36:25), as he decided to keep Guantanamo Bay open and continued the torture of detainees. West goes further on to say that presidents do not comment on or try to change policies followed by their predecessors as they "don't want [a] subsequent administration to take them to jail"(35:38). West is right that certain issues have not been looked into; however, his assertion that President Obama is not undoing the horrors of the policies advocated by President Bush stand contrary to evidence. On May 22, 2009 President Barack Obama said the "U.S. has suffered a setback to its moral authority, which is its 'strongest currency' in the world, by running the controversial Guantanamo Bay prison and vowed to stick to his decision to close the Bush-era anti-terror jail facility." Furthermore, throughout his term, Obama has tried time and again to make this promise of his come true, but has always met with some unforeseen opposition in the form of missing files of detainees or a negative vote from the senate.

Although West makes very valid arguments against Obama's priorities, he fails to examine the nitty-gritty details of the problem at hand. Unlike what West did, it is important that citizens weigh President Obama's actions on a deeper level than what appears to be true at the surface since most of Obama's decisions are taken keeping in mind the common good of the United States. How people react to Obama's decisions is highly subjective in that what one perceives as the right thing to do in a situation differs from one individual to another. What might be right according to Obama acting as the President of the United States may or may not be accepted as a reasonable decision by the common man, who looks at his decisions with a narrower perspective. Can we say that Obama is wrong in approving drone strikes when all he intends to do is safeguard his country and reduce the loss of military men? Is it right to blame Obama for the opposition he faced despite his sincere efforts to close Guantanamo? As president, Obama has a lot of commitments and some of his decisions and statements might not appeal to certain sections of society.

However, that doesn't mean that they are baseless. Under the pressures of globalization and increasing security threats as well as maintaining diplomacy with other nations, any president would earn a few negative criticisms. In the 21st century, it is but natural for the leader of a superpower like the United States to buckle under pressure from different fronts, nationally and internationally.

Avani Agarwal is an Architecture and Visual Communications Design double major from Kolkata, India and a proud resident of Lewis Hall. Written as part of her community-based Writing and Rhetoric class, Avani's essay is a rebuttal argument against the views expressed by Dr. Cornel West in his interview with "Democracy Now". It examines the validity of West's argument against Obama on the basis of faulty assumptions, false analogy and West's overlooking many key factors even though he provides very compelling arguments for his claims that Obama has no moral authority and is afraid to bring changes in past policy. Avani wishes to thank Professor Edward Kelly not only for his guidance throughout the writing process but also for introducing her to the pressing social issues in the United States. She would like to extend a special thanks to her peers in the class, particularly Stephen Freeman for constructive feedback on her writing.