Figures on the Rocks at the Edge of the Sea 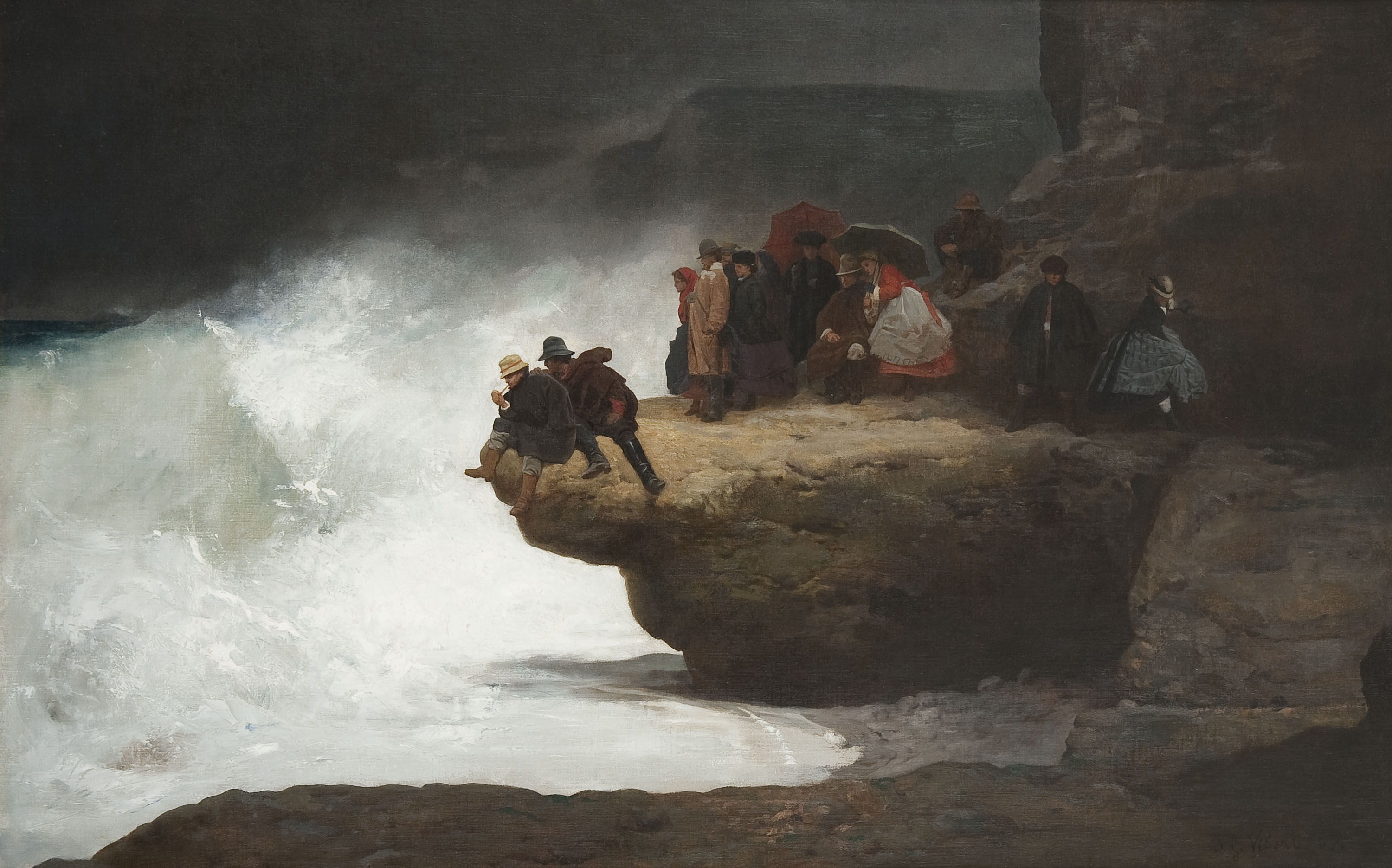 Jehan-Georges Vibert, Figures on the Rocks at the Edge of the Sea, or The Coast at Etretat, 1867

So look, there's a group of people poised on the rocks overlooking the ocean. Big waves, lots of foam. Primordial chaos. A woman turned away, hugging the wall—the safe zone. A gaggle of people huddled beyond her, orderly, a jury watching the sea stand trial. Two men in hats, out at the edge, past comfort, the adrenaline junkies, the Big Tough Guys. Their feet dangle off the side, a static free-fall. One smokes a pipe and pretends that water doesn't dampen the chamber. The second man leans close beside him. Planning to push his friend into the water? Probably not. He is too anonymous, too faceless, for that kind of sinister plotting. It's hard to get a feel for character from this distance. But the danger is still there, for those two men, and I hope they have a steady grip on the rock. It takes a lot of trust to reside at the brink of destruction.

Kurt Vonnegut put into words the thought of every good intellectual: "I want to stay as close to the edge as I can without going over. Out on the edge you see all kinds of things you can't see from the center." It's relatively easy to turn this painting into a metaphor. The stunning whiteness of the anarchic waves – that's illumination, that's knowledge, that's enlightenment. Nothing new. The rocks, the darkness – that's obscurity, ignorance. Again, standard. A textbook example of the dichotomy of wisdom and the lack thereof. The Big Tough Guys are about as close to going over as one could be, but at least they're sitting down, braced for impact, ready for the wave of understanding to lambaste them. In the meantime, they're breathing out puffs of tobacco smoke, vaporous offerings to the gods of erudition. I have to give them credit for braving the elements, for the unsteady steps they took across an uneven surface, for their buckling knees, for whatever thoughts are nose-diving through their minds at the edge of the world.

I offer less commendation to the group surveying artlessly, a few feet away, the yellow lights of acumen, the middle-of-the-roaders. At least they get points for attendance, for participation. It must be cold by the water's swells, and there must be discomfort in watching other people accomplish what one is incapable of. It is a difficult and necessary thing to acknowledge one's own limitations. When approaching the edge of the world, there is quite obviously safety in numbers, and I will not begrudge them that.

I cannot fail to address the woman at the far right of the painting, the woman with her back to the light, hunched, saturated in shadow. We all know her trajectory—off the rock, back toward town, where she'll doff the dirt from her shoes and forget the water, forget the precipice, forget the Big Tough Guys and the edge of the world. I do not look down on her, for in many ways I recognize myself in her stooped posture. It is easy to live in the center of existence, where one doesn't really have to think about it; one doesn't really have to consider how it looks from the edge.

I imagine the cluster returning home, overcoats lightly misted, heels dusty, droplets of seawater still in their hair. I imagine the two men at the edge standing up, turning back, hanging their damp hats on hooks and scrutinizing the center with brine-stung eyes. I imagine their newfound edgelessness, the way that now nothing glows as brightly as the waves did that night. Is it truly possible to be at the edge without falling over? Is it possible to go back to the center after that?

If exists within me the hunched woman, the escapee, the runaway, then I will persuade her to walk to the rock with precise steps and sit down at the edge of the world. I will embrace the brine and the sea swells and the smoke of the tobacco pipe. When that kind of enlightenment is accessible, it is a sin not to reach for it, even if it is just a metaphor.

Reilly Kohn is a Program of Liberal Studies and Psychology double major from Kildeer, Illinois. On campus, she is a resident of Pangborn Hall. She plans to attend graduate school and to ultimately work in editing/publishing. Kohn's essay, a personal response to Jehan-Georges Vibert's painting "Figures on the Rocks at the Edge of the Sea," explores the process of acquiring knowledge and striving to move beyond what is comfortable and safe. She drew inspiration from the contrast of light and dark within the painting, as well as from examining the perspectives of the various figures in their respective positions. Kohn would like to thank her former English teacher, Denise Foster, for her guidance and encouragement throughout high school, in addition to the Snite Museum of Art for its hospitality and support.