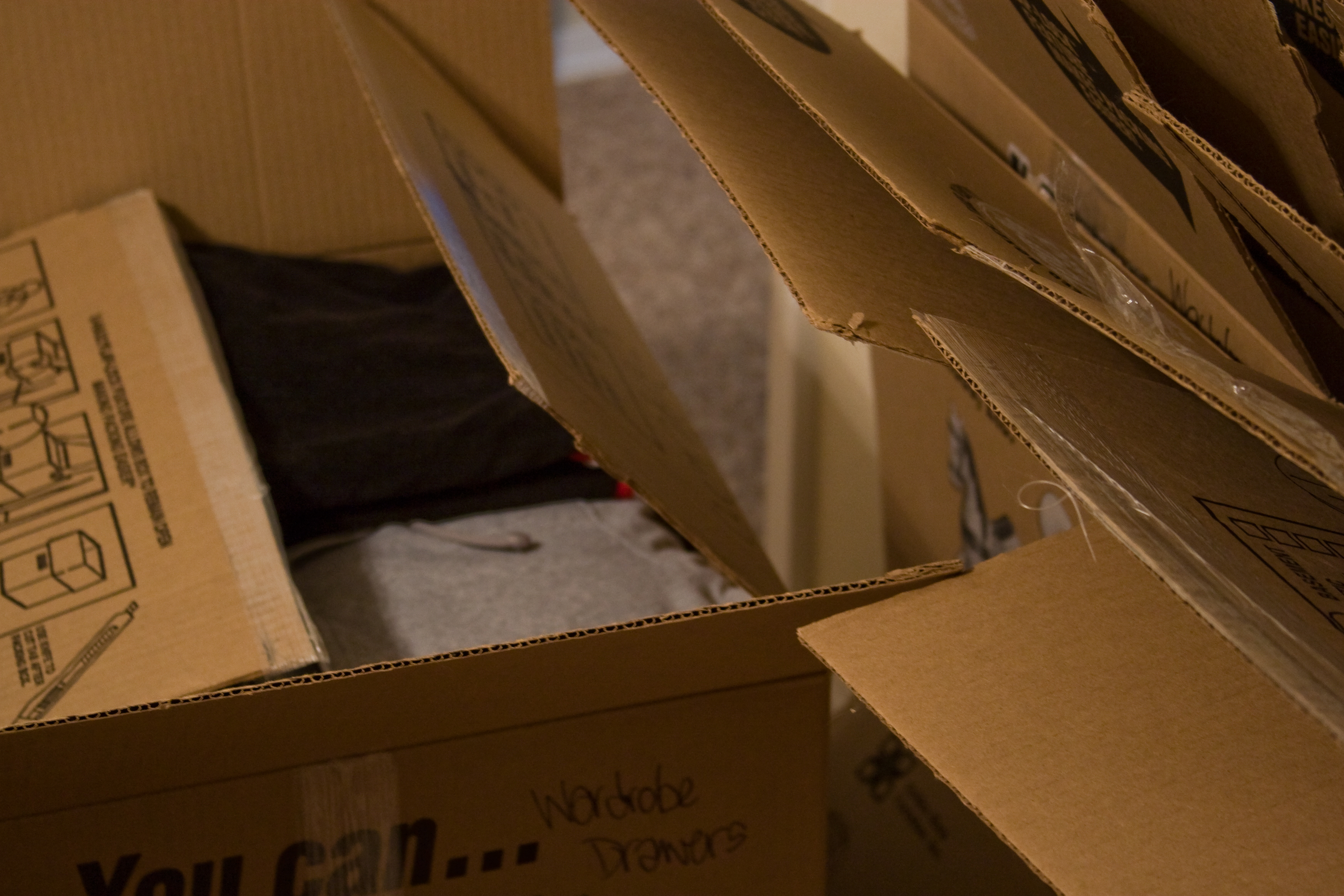 "Could you please hold your side of the box a little higher?" my mom barked.

Hopelessly grimacing I rejoined, "Well, could you please hold your end of box a little lower?"

At last, move-in day had come! After two and a half months of debating between color palates for my bedding, stocking up on hygienic and cleaning essentials, getting to know my quad-mates and, of course, packing, moving in was supposed to be the easiest part. Oh, was I wrong!

"Could you have brought anymore shit?" my Aunt Mary Joe carped.

As my aunt continued to grill me on how it was that I could have possibly thought that all of my "shit" could fit into my mansion-for-mice dorm room, I stared out the window at all the boxes still waiting to be hauled up the six flights of stairs. What was there to say? I mean, I only packed necessities! Ok, so maybe I packed necessities in every style and color, but nonetheless they were all necessities. Even if the word "necessity" is an exaggeration, each item represented a piece of home and carried with it a sentimental significance, therefore qualifying it as indispensable. In essence, my "shit" was my transferable home.

The remaining boxes seemed to get become successively heavier and the stairs seemed to get steeper with each step. After an hour of intensive labor, I was sweating in places I did not know one could sweat. We took a quick water break and then again set to work. The bed came first. We all agreed that the best room configuration would be to loft the bed. To do so, we positioned the armoire and desk to face each other, but spaced them far enough apart so that they would serve as foundational pillars for the bed frame. It seemed like a great idea at first: very collegiate. However, lifting the bed frame while manipulating the armoire and the desk with two middle-aged women who had already gotten in their workout for the month proved arduous. In some ways, I felt like an Egyptian slave, strenuously heaving stone up a pyramid. Like the boxes, I was not lifting the bed the way my mother would have liked. The air about her conveyed that I was somehow the reason for her lack of strength. But, nevertheless, we all pushed through and were able to loft the bed. Next, naturally, came the unpacking of many boxes. After five hours, every article of clothing was either on a hanger or in a dresser drawer. My shoes had finally found their new home in a shoe rack and my desk, filled with school supplies and decorated by books, was looking very official.

My possessions were not alone in regards to being placed into a new home; I too was seemingly packaged, sent, and then permanently unpacked at Notre Dame.

In the on-going process of unpacking--that is, establishing my home at Notre Dame--I have also started to realize that clothes, shoes and jewelry do not eat up homesickness or the feeling of loneliness. My aunt was right--I brought a lot of shit. Intended to fill the abyss in my heart, all of my shit has in fact, however, just made me more aware of how alone I am in this transition period. If I had restrained myself from the idea that I could pack home into boxes, the transition might have been a little smoother. My shit has not made me miss home any less nor has it made the transition any smoother. Each time I enter my room, I become more cognizant of what it is that I really miss, the intangible: a peace of mind, a genuine sense of home, and a have-a-good-day or welcome-home hug from my parents. Now, I often admit to myself that the two months I spent cramming as many items into boxes as I could and worrying about what was to come were two months I could have spent solidifying my relationships with others.

I take comfort in knowing that I was not the only freshman at Notre Dame, or any other college, for that matter, who brought shit thinking it would serve as Pepto-Bismol for the soul. One of my quad mates, for example, brought fairy lights to represent the warm glow of fireflies that brought the evenings to a close in her hometown. She, too, believed that home was tangible; that is, tangible enough to be transported in a box. Now, the fairy lights just make her cry.

In one form or another, as humans beings we look for material items to fill gaps that can only be filled by nonmaterial possessions. In doing so, we often limit our ability to grow, as we are restricted by the same boxes that hold our possessions. During the past four weeks, I have slowly come to the conclusion that I packed the wrong boxes.

The hardest part of moving into a dorm room is not consolidating all of one's possessions, but rather coming to the realization that the intangible--home, unconditional love and a sense of familiarity--cannot be boxed up.

Bridget Rickard's narrative explores the rather toothed transition from the safety of home – high school – to a world unknown – college. While Rickard makes light of this rather defining transition, her essay seeks to stimulate readers' interest in cultural meaning making, particularly materialism. Originally from Boca Raton, Florida, Rickard now resides in Badin Hall and is pursuing a degree in the Program of Liberal Studies with a minor in Education, Schooling and Society. Rickard owes her deepest gratitude to her Writing and Rhetoric professor, Dr. Elizabeth Evans, for genuinely engaging with her various ideas and constantly challenging her to produce impassioned responses to some of life's most puzzling questions. Rickard would also like to extend her thanks to her previous English teachers at The North Broward Preparatory School and St. Joan of Arc for their many years of encouragement and inspirational teaching.