The Way We View Them: Physicality and Juxtaposition in Jaime Guerrero's Encarcelados (Incarcerated) 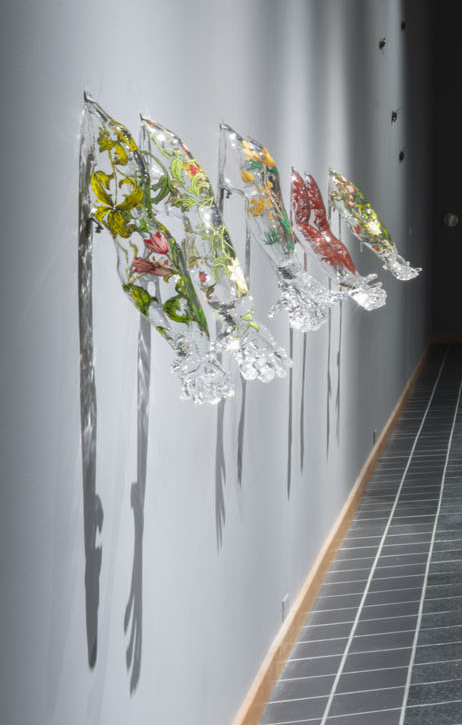 Four pairs of glass arms protrude from a blank wall, cut off at the shoulders, reaching out toward the viewer. On first glance, they are beautiful: hollow and delicate, covered with vibrant painted flowers of yellow, red, and green. These arms, however, extend backward from the implied body as if being harshly pulled into handcuffs or chains, and indeed the glass around the wrists is solid and thicker than the arm itself, creating cuffs or bonds around each hand. These, too, are solid glass, and they cast an opaque shadow onto the wall behind them, creating a row of tense, grasping shadow hands below the sculptured arms. These are the arms of enchained prisoners, and Guerrero’s Encarcelados (Incarcerated) offers a powerful look at the emotional depth of incarceration. Through juxtaposition of physicality with viewers’ assumptions, and light with shadow, Encarcelados (Incarcerated) demonstrates the intense guilt and struggle for forgiveness of those who have been incarcerated, challenging society to view prisoners as more than their crimes.

The position of the arms and hands of the sculpture’s incarcerated speak directly to their situation. The arms are drawn uncomfortably away from the shoulders, wrists shackled, hands grasping at nothing, and this physical portrayal of constriction immediately tells the viewer that these individuals are imprisoned. In the minds of viewers, they have committed a crime and are being punished. This assumption is not unfounded; the majority of those in prisons and correctional facilities are guilty of crimes, and Guerrero uses the assumption to ultimately challenge his audience. The position of the hands is desperate, tense, violent, evoking in the audience a sense of fear, and even pity, as it is painfully clear that this is a representation of one person, or group, having power over another. While the immediate assumption is that these figures deserve to have their power taken away, this is manipulated by the positioning of the handcuffed arms outstretched towards the audience, as if the viewer is the one exerting power over these prisoners. This is an uncomfortable realization; most people would rather not be personally responsible for dealing out punishment, even to those who may deserve it. In this way, the sculpture encourages the viewer to consider their relation to those who have been incarcerated. While the typical person does not physically handcuff prisoners, the vast majority look at those who have been imprisoned and see only their crime. In this way, the average viewer is being confronted with the reality that those who write off prisoners as getting what they deserve or as incurably evil human beings do hold a power over them. It is this unshakeable power which the incarcerated face both in prison, and if they are eventually released. Being confronted with such judgment and hate, genuine repentance and self-forgiveness becomes a struggle, as demonstrated by a further use of juxtaposition within the sculpture.

Just as Guerrero uses the contrast between viewers’ expectations and the actual physicality of the sculpture to facilitate consideration of the way society views the incarcerated, he employs a similar juxtaposition between elements of light and shadow in his work to demonstrate the effect that society’s judgment has. One of the most immediately noticeable aspects of the sculpture is the painted flowers along each of the arms. Painted in reds, greens, and yellows, these flowers are beautiful, made even more so by the light shining through the slightly transparent paint and wholly transparent glass. This not only adds color to the sculpture, but also gives the piece a sense of life, growth, and freedom. The flowers end at the shackled wrists, though, and the sense of hopefulness evoked is contrasted sharply with the reminder that these figures are incarcerated. Guerrero also hand-carved the arms to be hollow except for the wrists and hands, which allows light to filter only through the arms; the result is a dark outline of an arm with an overlay of refracted light and color. At the hands, however, the darkness of the shadow is shocking in contrast to the glass sculpture and refracted light in the upper parts of the shadow. What these shadows represent – guilt, confinement, etc. – is in direct opposition to that represented by the flowers. This is a powerful statement on the nature of prison life, which is certainly defined by confinement, stagnation, and guilt. In such an environment, one of the only ways to find life, growth, and freedom (as represented by the flowers) is through forgiveness. Many prisoners understand that their actions were wrong and want nothing more than to move beyond the past and start building a new future. In order to do so, however, each prisoner must be able to forgive him/herself. The flowers and effect of light shining through the hollow glass arms seem a fitting representation of this self-forgiveness. The contrasting bound hands demonstrate a major obstacle in prisoners reaching this state of self-forgiveness. As society looks at the incarcerated and sees only the crimes they have committed, they actively have a power over these men and women, and this power often prevents the prisoners from seeing anything other than the crime within themselves.

By presenting viewers with two entirely different concepts – that of beauty and life versus that of violence and hopelessness – Guerrero offers a portrayal of a struggle for self-forgiveness, and thereby humanizes the incarcerated. While it is certainly true that men and women in prison have (for the most part) committed terrible crimes, a great deal of them feel genuine remorse and share a desire for a new beginning in life. Encarcelados (Incarcerated) challenges the viewer to identify as the oppressor, the one imprisoning the faceless prisoners. As such, it suggests that society re-evaluate the way it views the incarcerated. If prisoners can reach full self-forgiveness and actually begin a new life outside of prison and judgment, society will benefit. Thus the ideal purpose of prison is fulfilled: making society a safer place.

Sienna Wdowik, class of 2017, is a political science and Arabic double major from Fort Collins, Colorado. She enjoys writing and is honored to have her essay included in Fresh Writing 2014; her paper, entitled “The Way We View Them: Physicality and Juxtaposition in Jaime Guerrero’s Encarcelados (Incarcerated),” is an analytical interpretation of Guerrero’s piece “Encarcelados,” which features several pairs of painted glass arms fixed to the wall. She was inspired in her analysis by the documentary Shakespeare Behind Bars, which humanizes the lives and experiences of the incarcerated. Sienna is deeply interested in issues of social justice and traveled to India during the summer of 2014 to work for women’s education and empowerment in Mumbai. She intends to work in foreign policy or diplomacy and is especially interested in the politics and culture of the Middle East. She would like to thank the Jaime Guerrero and Snite Museum for their support and for providing students with access to significant and variable art.