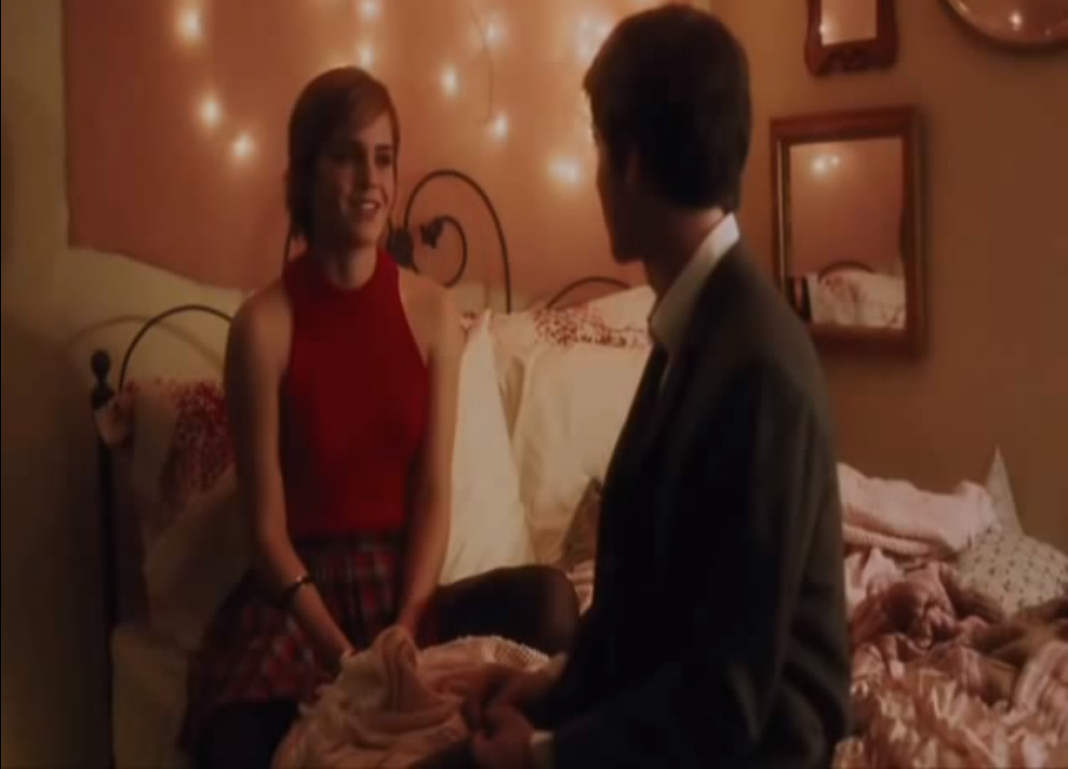 Screen Capture, The Perks of Being a Wallflower

On my very first day of high school, I was late to class, and in my rush, I tripped up the stairs as my shoes fell down the stairs. To add insult to injury, I picked myself up and turned around only to realize that an entire classroom of seniors was watching my humiliating ordeal. I flushed, picked up my shoes, and scurried off to my first class of high school five minutes late. High school is a time full of awkwardness, trials, successes, failures, and most of all, growing up. No matter the background from which someone hails, the teenage years are ones of growth and discovery. The Perks of Being a Wallflower, a film directed and screen written by Stephen Chbosky, portrays these experiences in an extremely relatable and moving manner which creates a lasting impression and perspective on the teenage experience.

Perks is adapted from Stephen Chbosky’s book, The Perks of Being a Wallflower, and was released in October 2012 with little initial success. On it’s opening weekend it only grossed approximately $228,000 (IMDb). Eventually, however, the box office did begin to pick up and the movie became fairly monetarily successful. Logan Lerman, of Percy Jackson and the Lightning Thief, Emma Watson, of the Harry Potter series, and Ezra Miller all deliver stellar performances as they lead Perks’ cast. The film, set in mid-1990’s Pittsburg, PA, portrays a timeless feel as it focuses on the narrator, Charlie, played by Lerman, as he enters his first year of high school an anxious wallflower who is struggling to find his place. However, he soon befriends the radiant and understanding Sam, portrayed by Watson, and her quirky and lively brother Patrick, portrayed by Miller. In fact, one of the best features of the movie is the spectacular acting chemistry and believability between Lerman and Watson. Additionally, Miller’s performance as the charismatic and slightly eccentric friend adds to the overall enjoyment and quality of Perks. Together, the friends open up and deal with issues such as unhealthy relationships, drugs, family pressures, bullying, and more. Almost immediately, Charlie and Sam grow very close and it becomes obvious that there is chemistry between them. As their friendship unfolds, the movie addresses a range of typical and not so typical high school dramas. Furthermore, the atypical issues that Perks deals with are what I believe make the film enthralling and different from other generic high school, coming-of-age movies.

Some critics say that Perks deals only with the same, redundant, teenage, “angsty” dramas that other high school movies commonly deal with. For example, Jordan Mintzer of the Hollywood Reporter said, “…The Perks of Being a Wallflower, a heartfelt but rather generic coming-of-age dramedy” (Mintzer). I believe, however, that his review is short sighted and that the film does, in fact, address more than just the run-of-the-mill problems. Although I cannot spoil all of these details, it becomes very obvious in certain scenes that Charlie is dealing with more than the average high schooler. This can be seen in the consistent references to his Aunt Helen’s death. While it is normal for one to be troubled by a death in the family, the number of times and situations in which Aunt Helen’s death is brought up gives a hint that there is more to Charlie’s issues than meets the eye. For example, any time that Charlie gets very stressed, Aunt Helen is mentioned. In fact, she is brought up enough that she eventually becomes a major character. While, one is not initially sure why so much attention is paid to Aunt Helen, it is obvious that the movie is dealing with more than just generic high school problems.

Another factor that makes Perks a good movie is the quality acting and the resultant depth of the characters. Some critics, such as Richard Corliss, bash the movie for casting adult actors: “Oh to be 20 again, and in high school! That’s the implicit theme of The Perks of Being a Wallflower… and of the many other rite-of-passage movies that cast actors in their early twenties to play kids four to six years younger” (Corliss). While it is true that Perks’ actors were, in fact, in their early twenties, they all look and act convincingly like students in high school. Furthermore, Corliss’ criticism is invalidated by the quality of the acting portrayed consistently throughout the film. Lerman does a fantastic job of playing the anti-social wallflower, Charlie, and Watson is the perfect depiction of the confident and upbeat Sam. Together, their chemistry reels the viewer in to experience every emotional moment. In one of the best scenes exemplifying their stellar acting, Sam kisses Charlie for the first time. Charlie’s stuttering, hesitation, and even body language contradict but also mesh perfectly with Sam’s deliberate and reassuring actions in order to create an extremely believable first kiss sequence. Lerman and Watson play their leading roles in such a perfect manner that anyone can believe they are in high school. Additionally, everyone can relate to them and their experiences no matter what one's personal background may be.

One scene that shows the overall excellence of Perks is the final tunnel scene. In this sequence, the trio of friends drives through a tunnel and stands up while listening to “the song,” an experience which has played a major role in their friendship. Many critics did actually praise this scene for its effectiveness, and I agree whole-heartedly with them. As critic Ian Buckwalter, said, “The film is filled with moments like [the tunnel scene], where the director triggers genuine sentimentality and waves of nostalgia through interaction between sound and image” (Buckwalter). Charlie narrates the scene, as he does many other scenes, as if he were writing a letter to the audience. The reoccurring narration allows an element of insightfulness and depth that many other coming-of-age movies lack. In addition, the background music behind the narration is a light twinkling variation of bell sounds that compliments the narration perfectly. At the end of the narration, Charlie’s voice cuts out and David Bowie’s song, “Heroes,” swells to the front just as the trio exits the tunnel. This combination of music emotes a feeling of inspiration, bravery, and hope. The tunnel scene is just one example of the film's fantastic soundtrack and audio mixing, which is consistently effective throughout the entire film. Even further, the cinematography and camera angles used in the tunnel sequence focus heavily on the faces of the characters with bright bulbs of light all around them. These two images, when put together, create in the viewer's mind the image of hope and the idea of heading towards the light at the end of the actual and figurative tunnel. Together, the narration, background music, and cinematography create a scene that sends chills across one’s skin every single time. The tunnel scene, and the entire film, effectively uses film techniques and ethos in order to appeal to the audience’s emotions and cause them to feel as if they are in the movie, in the situations, and personally connected with the characters and their teenage experience.

Finally, I strongly recommend The Perks of Being a Wallflower to anyone because I believe it is well produced, superbly acted, effectively uses film techniques and ethos, and is a relatable story which strongly conveys the fact that many issues which may seem tragic oftentimes actually help one grow and mature. I especially recommend the film to its target audience of teenagers, as the lesson about life’s issues is one that every high schooler needs to understand. Perks is a timeless and relatable movie which I have already seen twice and would gladly see again.

The Perks of Being a Wallflower. Stephen Chbosky. Summit Entertainment, 2012. Film.

Emma Cooper is a biology major and international development studies minor from Wichita, Kansas. On campus, she calls Lewis Hall her home and is passionate about working with GlobeMed and Best Buddies. In the future, she hopes to attend medical school and become a pediatric neurologist. Her piece, "The Perks of The Perks of Being a Wallflower," is a movie review and analysis of Steven Chobsoky’s movie, The Perks of Being a Wallflower. Inspiration for this piece came from the viewing of the movie and the strong impact that it had on Emma. She would like to thank her Writing and Rhetoric instructor, professor Deborah Forteza, for all of her help with this piece and for improving her writing ability.