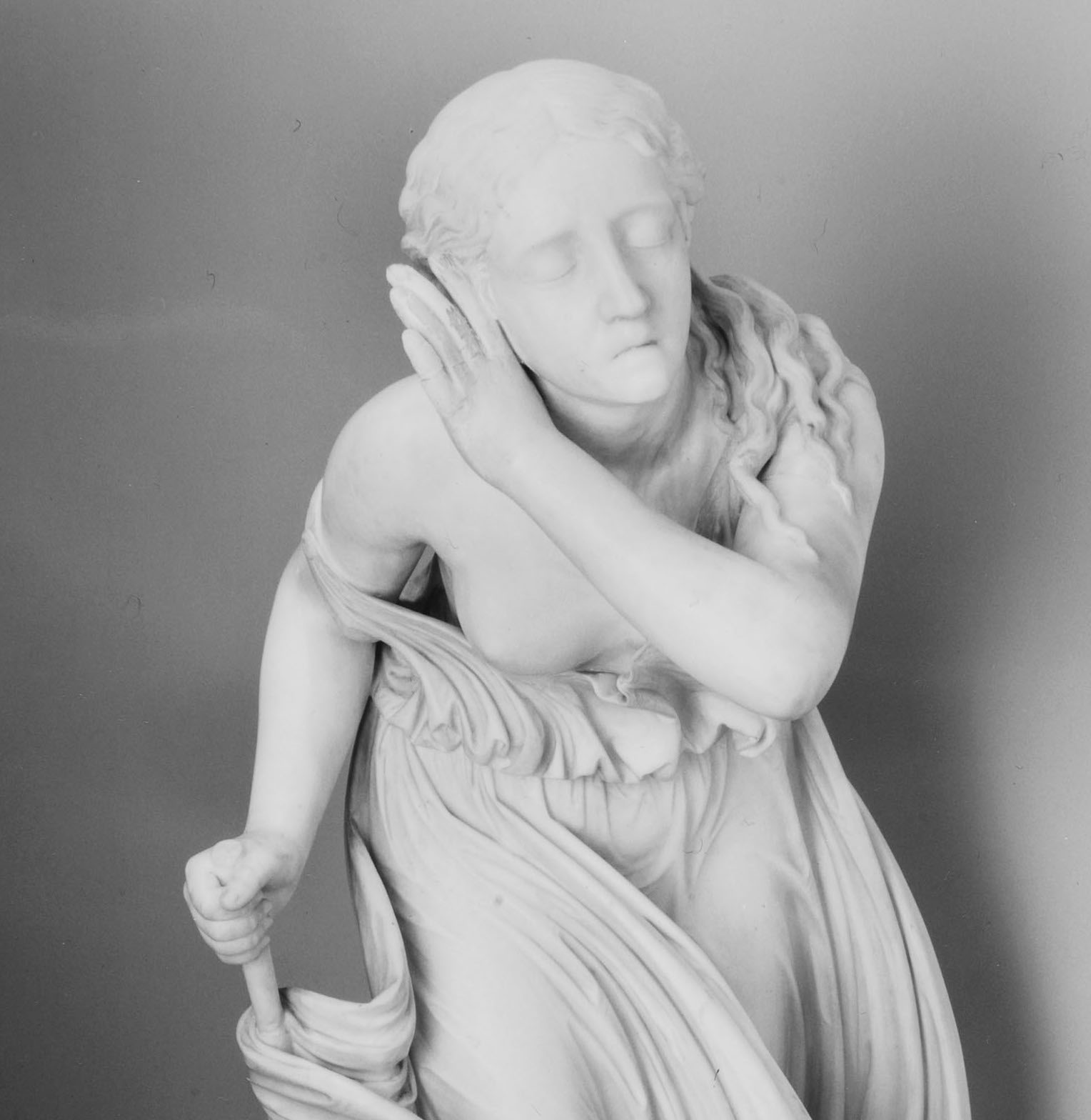 The dusty earth trembles beneath your footfalls as you run through the streets of Pompeii, an acrid tang of airborne noxious sulfur stinging your nose and mouth. You are surrounded on every side by swarming throngs of people pushing and jostling one another in a self-preservative effort to flee from the impending danger. From every direction can be heard the sounds of sheer terror: the commotion of shrieks and cries rising from the panicked swarm; pottery and other wares clattering to the ground as stalls in the market are overturned; the rumbling of Mount Vesuvius as it begins to unleash its fury. Your hand flies to your ear as you struggle to search through the din for the single sound for which you long to hear above all else: the voice of your beloved. Is he safe? You cannot know until you find him—if you can find him. Chaos reigns, but in your sight lies nothing but darkness, for you are Nydia, the blind girl depicted in American sculptor Randolph Rogers’ 1859 marble statue Nydia, the Blind Girl of Pompeii.

I came into contact with this work of art only fairly recently; it was the Tuesday before Thanksgiving break, and one of my classes had been canceled, so I was taking the opportunity to procrastinate on my homework in favor of perusing the Snite Museum of Art. As I stepped into the second floor atrium, I was immediately struck by the beauty and realism of this life-sized statue. A glance at the title moved me to sympathy as I imagined Nydia’s struggle to maneuver the streets of Pompeii—a harrowing situation for everyone involved but all the more challenging for one without sight. I found myself utterly drawn in by the smooth perfection of her ovular, idealized face that slopes to a dainty chin, her closed blind eyes, the long straight bridge of her nose, and her slightly open mouth. Atop her head, wavy hair cascades from a loose bun over her shoulder. Only a subtle crease on her forehead between her slightly furrowed eyebrows betrays any indication of stress in her otherwise flawless appearance, reflecting her intense concentration as she focuses entirely on what she can hear and how she can maneuver through the chaos using her staff, which is her only hope of escape, while her other hand cups her ear in an attempt to follow her hearing. Nydia’s forward-leaning posture, her weight balanced on her right leg, her striding left foot, and the flowing fabric of her dress—so realistic that I could hardly believe that it is marble—all evidence the quickness of her pace. In her haste she has overturned and abandoned a woven basket to her side which bears the name of the artist. In spite of or perhaps because of her desperation, Nydia is truly beautiful.

That this piece so immediately piqued my interest is somewhat rare; typically marble statues impress me, but fail to speak to me, for often they seem so lifeless and austere. Nydia, though, has an especial vitality that intrigued me. The fact that Nydia is named as well seemed too significant for her to be just any girl running through Pompeii as Vesuvius erupts; I felt that there must be some further meaning behind the work. Interested to find out more, I sat down on a bench facing the statue, fishing my phone out of my purse in order to consult my dear friend Wikipedia. To my surprise I found that Nydia is a character from Edward Bulwer-Lytton’s nineteenth-century novel The Last Days of Pompeii, which was itself based on a painting by Karl Brilliov. Nydia, a flower seller who had been cruelly enslaved, is rescued from her captors by the main character, Glaucus, with whom Nydia falls in love. However, Nydia suffers in her pining, for Glaucus is already enamored with another, Ione. After twists and turns of the plot involving evil schemes, murder, betrayal, and a gladiatorial fight, the novel culminates in the eruption of Vesuvius, which is the scene which we are to imagine upon seeing Roger’s Nydia, the Blind Girl of Pompeii; Nydia’s concern in this moment is not her own self-preservation but worry for her beloved Glaucus, for she is doing her utmost to find him as she traverses Pompeii during the eruption. As it turns out, Nydia manages to survive the harrowing experience in Roger’s depiction of her and in fact saves the lives of Glaucus, his beloved Ione, and a friend Sallust by leading them out of the city to a ship. The very next day, though, she decides that she prefers to end her existence rather than to continue to live a life of unrequited love, giving herself over to death by simply slipping into the sea; evidently, the desperation she feels during the eruption is nothing compared to the excruciating psychological pain of loving someone who is indifferent to her.

That Nydia decides to commit suicide rather than bear a life of hopeless, one-sided love was a horrifying revelation to me, and suddenly the statue became, in my eyes, an even more heart-rending and tragic piece. In this one integral moment captured in marble, so much is beyond her sight—not only what she physically cannot see due to her blindness, but also the death that she will soon choose for herself. Rogers, though, already knows what fate is in store for the subject of his work: Nydia, the Blind Girl of Pompeii is not only a reflection of the terror she feels in the moment as she runs headlong to save her beloved—for ultimately she is also running headlong toward her own demise by suicide. This statue of Nydia crystallizes a powerful theme of the blindness that is love, which can drive a person to desperation and the most tragic of consequences.

Maya Jain is a student from Peoria, Illinois, who hopes to study theology. Her essay, a personal response to the statue Nydia, the Blind Girl of Pompeii, was the brainchild of a procrastination-driven trip to the Snite Museum of Art. Jain would like to thank the employees of the Snite, who are always up for pleasant conversation; she also encourages students to take some time out of their schedules to visit the museum so as to encounter the many fine works housed there! In an unlikely turn of events, while perusing the Detroit Institute of Art over spring break, Jain was startled to come across the exact same statue of Nydia as the one in the Snite. As it turns out, Randolph Rogers created and sold more than fifty copies of the statue; apparently, doomed classical figures immortalized in marble were all the rage in the mid-nineteenth century!