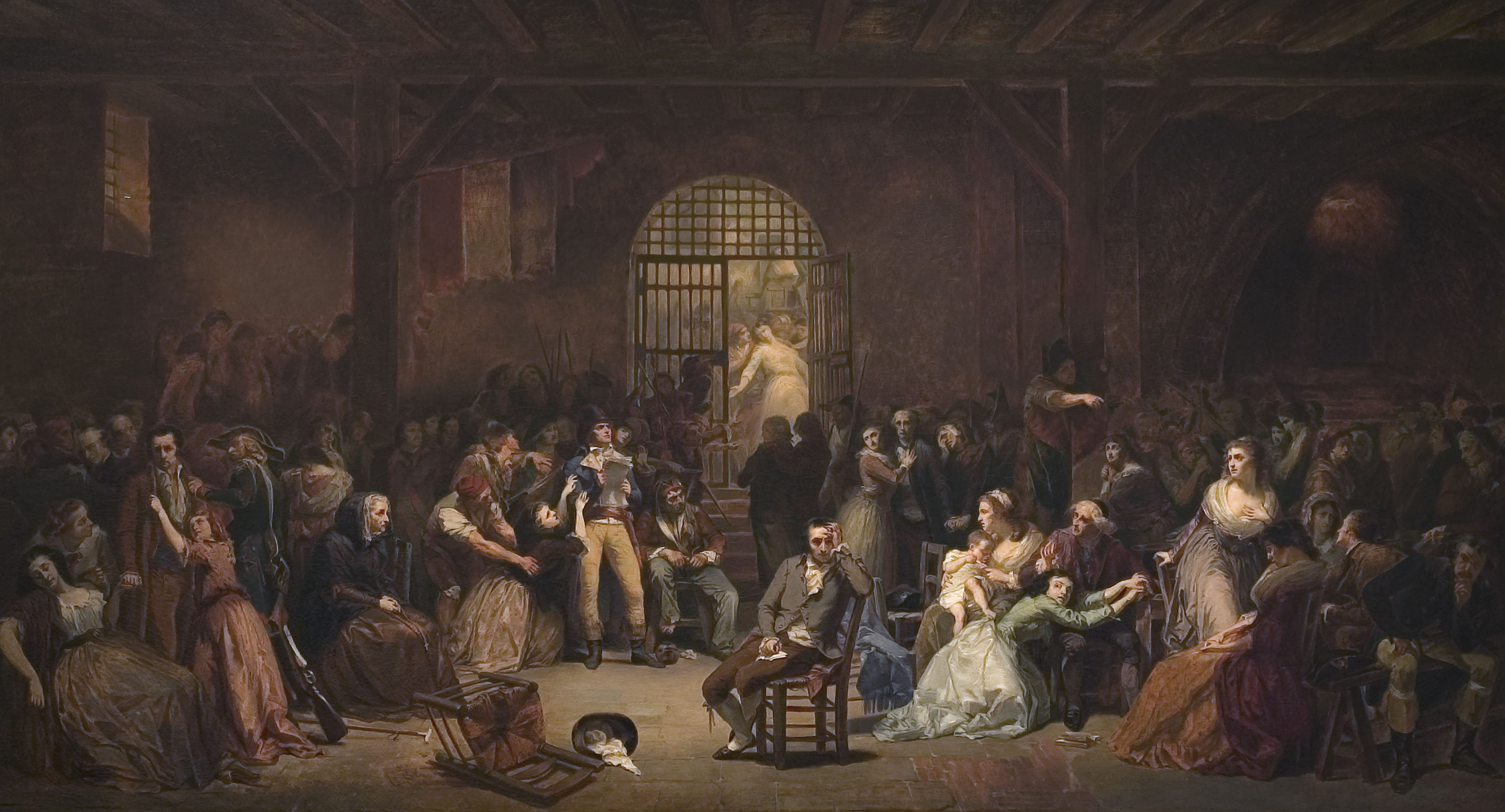 Charles Louis Lucien Muller, The Roll Call of the Last Victims of the Reign of Terror, oil on canvas

A harsh criticism of the hypocrisy and duplicity of the French Revolution is offered by French ﻿﻿painter Charles-Louis Muller in “The Last Roll Call of the Victims of Terror.” This masterpiece depicts the crowded interior of the Parisian prison of la Conciergerie, where a bailiff of the Republican Government reads out the names of the prisoners to be executed. Despite the very chaotic scene, the elements of the composition are positioned in a very careful and reasoned way, positioning the prisoners in a semicircle across the room. At a closer look, the arrangement of the scene strongly resembles that of a theatrical stage; just as actors, the figures are all facing the audience.

The palette adopted is dark and cold, reflecting the gloominess of the subject. The atmosphere is made suffocating by the coldness of the bare and desolate location and we can immediately feel the absence of light, the sensation of darkness, and the sense of insecurity. The walls, with their naked bricks and rough wooden beams, unadorned and empty serve as a backdrop. The floor, made up by unrefined gray stones that communicate us the idea of frigidity, serves as stage, while the painting's surface is the fourth wall between stage and audience.

Yet, what most reminds us of a theater is the lighting. Instead of coming from the windows, the source of light seems to come from above and it is made up of a few strong and intense rays that converge on the main characters, leaving the minor characters and the elements of the background in the dark. Presenting the action in the form of a play is a very intriguing device because, while it may be an unnatural configuration, it surely supplies a dramatic atmosphere. On this stage, the painter enacts for us a story of sorrow and disgrace.

After having set up a desolate and gloomy scene, he places a few but very important theatrical props. A republican French flag hangs loose from the ceiling and waves its three colors that were meant to stand for the Revolution's values: Liberté, Égalité, Fraternité. Its placement over a scene of oppression is purposely satirical, and the painter uses it to strike effectively the revolutionary ideology by showing the hypocrisy that lies behind men who in the name of liberty oppress their brothers. This lack of liberty is also represented well by the heavy grate that functions as entrance to the prison; through it we glimpse the horror of the summary execution of a young and probably innocent woman. A book, abandoned and trampled, symbolizes the triumph of violence over reason. A rosary in the hands of an old woman recalls the ultimate and heavenly hope of many prisoners.

Two chairs occupy the foreground. One, empty and turned over, witnesses the departure of a prisoner and catches the eyes with its emptiness and solitude. The other, right beside it, still offers a feeble support to its occupant. The meditative figure, isolated in the middle of the scene, we know to be the poet Andre Chenier (Snite Museum of Art 2005, 182). The painter clearly made him the central figure in his composition, the main character of his play. While he scribbles a few lines on a piece of paper, his posture and gaze recalls that of a dramatic soliloquy. In this soliloquy, apparently, he is careless of what is going on around him; he is not engaged in the confusion of bodies and movements that takes place in the room.

While the poet may be detached from the rest of the scene, Muller’s artistic talent makes it impossible for us to neglect what is going on behind him. First of all, the great detail that he employs yields a very vivid, and thus engaging, scene. The authenticity of the expressions engraved on the faces of the prisoners conveys a sense of fear and oppression, but most of all astonishment in front of the absurdity of such situation. Some prisoners are resigned and stand dignified against their adverse fate, with their heads up high and proud. Others abandon themselves in desperation, sheltering their faces in their hands and collapsing on the chairs and on the ground. Many seek comfort in one another, embracing loved ones and strangers, and exchanging looks of terror and misery. Elderly and babies alike are part of the crowd, and are shown by Muller to underline the arbitrariness of their oppressors.

The focal point of the whole crowd is the tall bailiff, with his merciless gaze and his fierce posture, who stands on the center left of the semicircle of bodies. The arrogance of his posture and attitude and the craving and vengeance in his eyes are a sublime pictorial embodiment of Muller’s perspective of the Revolution. No justification can be given, the painter suggests, for the bailiff’s cruel actions, and no ideal can be used as an explanation for such gratuitous pain. On the other side, the victims and their suffering are embodied by the gracious woman that points to her chest, incredulous to her fate, while her pretty face is distorted by panic. The contrast and comparison between the merciless bailiff and the innocent young lady leaves no doubt to whom the painter sides, and it provides the viewers with strong imagery.

This is what the painter wants to show us, how the justice that was supposedly brought by the revolution is nothing but mere vengeance. This great revolt has changed nothing but the roles. Before it was a small number of arrogant nobles ruling a great number of meaningless peasants; now it is the opposite. The bailiff and his minions act as oppressors of a great number of disgraced people who once were wealthy and safe. This is also stressed by the painter by dressing the prisoners with clothes that are fancy and elaborate dresses, but that now are torn and dirty: he wants to emphasize the role of luck in man’s life and the precariousness of earthly goods.

Now we better understand the thoughts and meditations of our lonely poet: his frown of desolation and apathy comes not from alienation from the surroundings, but from the confirmed realization that human justice is nothing but a chimera. What seemed to be a great change in human events, ultimately ended up in a civil war and a massacre of thousands. In the absurdity of human life, where every man fills a role but is given no script, the poet assumes a tragic stature, and resembles a Shakespearean hero who, trapped in his fate and with no hope of success, meditates and ponders what happens around him. Through the work of Muller, his lonely monologue becomes a timeless dialogue with the viewers of all ages that today has reached us. His desolate frown crosses the centuries and still today seems to ask us if earthly justice is ultimately possible. Probably, his doubts will never find an answer, but his questions will continue to fuel debate and intellectual engagements in the years to come thanks to this painting, proving art’s great power to provoke the human mind and creativity.

Muller, Charles-Louis. 1850. "The Last Roll Call of the Victims of the Terror," oil on canvas (Snite Museum of Art, Notre Dame).

Kevin Wilkins is an Italian-American freshman and proud knight of Keenan Hall. He is currently studying biology and Medieval studies, though he has passions for many other subjects, both intellectual and artistic, like drawing, reading, running, history, and physics. He aspires to one day attend graduate school and intends to work in the field of environmental or medical research. He would like to thank Professor Lauren Whitnah for all of her guidance and would like to extend a special thank you to his family and friends, particularly Jonathan Baker. Wilkins' essay investigates the political, propagandist and philosophical implications of a painting by Charles Louis Muller that reflects the nature of the French Revolution.